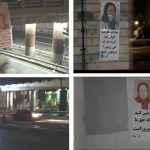 Written by Esmail Mohades on November 29, 2019. Posted in NEWS 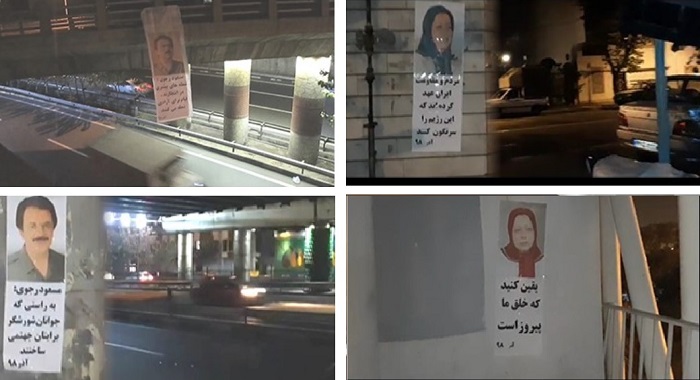 Iran’s latest popular protests have managed to continue unabated in spite of the most brutal government repression throughout the country. Not only have the protests continued, but despite the brutal crackdown, activities of the Mujahedin-e Khalq (PMOI/MEK) resistance units in major cities have escalated. On November 28, 2019, the Secretariat of the National Council of Resistance of Iran (NCRI) released a statement regarding these activities.

“On Tuesday, November 26, 2019, despite the full readiness of the State Security Force (SSF), as well as the military and intelligence forces, the Resistance units posted large portraits of Mrs. Maryam Rajavi, the President-elect of the National Council of Resistance of Iran (NCRI), and Mr. Massoud Rajavi, the Iranian Resistance’s Leader, in different parts of the capital, Tehran, and other cities, including Tabriz, Orumiyeh and Kerman.”

Pictures, Messages by the Resistance’s Leadership on the #IranProtests in Tehran, Tabriz, Orumiyeh, Kerman https://t.co/o5skMCxYpJ

The NCRI statement reads in part adding: “These pictures were posted among other locations in Police Expressway, Navab, Ghane’i, Jamalzadeh and Parcham streets, as well as in Javadieh district, and Sepah and Bahmani squares.”

“Messages on the banners read, “More flames on the way. Uprising for freedom is ablaze,” “Rebellious youth have made life like hell for the mullahs,” “overthrow of the anti-human enemy is certain,” “tremors of being overthrown shakes the religious dictatorship to its foundations,” “Iranian people and Resistance have pledged to overthrow this regime,” “be certain our people will succeed,” and “Sheikh has no choice but to suppress, But, he is digging his own grave.”

The uprising and activities of MEK resistance units continue, while the regime also intensifies the crackdown on the protesters.

On November 25, 2019, Amnesty International released a statement concerning the crackdown.

“According to credible reports received by the organization, at least 143 people were killed. The deaths have resulted almost entirely from the use of firearms. One man was reported to have died after inhaling tear gas, another after being beaten. Amnesty International believes that the death toll is significantly higher and is continuing to investigate.” AI statement reads in part adding:

“The international community’s cautious and muted response to the unlawful killing of protesters is woefully inadequate. They must condemn these killings in the strongest possible terms and describe these events for what they are – the deadly and wholly unwarranted use of force to crush dissent,” said Philip Luther, Research and Advocacy Director for the Middle East and North Africa at Amnesty International.

“Horrific accounts from eyewitnesses and victims’ relatives on the ground, information gathered from human rights activists and journalists outside Iran and extensive video footage analyzed by Amnesty International’s Digital Verification Corps provide clear evidence that Iranian security forces have been intentionally using firearms against unarmed protesters who posed no threat to life.

“Security forces responsible for the crackdown include Iran’s police force, the Revolutionary Guards and plain-clothes agents from the Basij paramilitary force and others.”