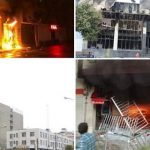 During the ninth day of protests, protesters and MEK supporters continued to be present in around 165 cities across Iran.

Protests are continuing in Iran, marking the ninth consecutive day. Last Friday, people took to the streets, angered by the regime’s announcement that petrol prices would be sharply increasing at a time when the people are already struggling to afford the most basic of amenities.

The People’s Mojahedin Organization of Iran (PMOI, Mujahedin-e khalq or MEK) network inside Iran has been able to communicate with its network outside the country, giving an approximate view of the events as they unfold. So far, more than 300 people have been killed during the protests and more than 4,000 people injured. It is also estimated that at least 10,000 people have been arrested.

Eight days after the start of protests in #Iran, and despite the shutdown of the internet and information blackout by the #Iranian regime, #IranProtests continue. pic.twitter.com/bszKGMAwYI

The Iranian regime sees the MEK as its enemy, and it certainly could be described as the domestic enemy. There are MEK supporters all over the country, and it also has a wide presence outside the country.

During the ninth day of protests, protesters and MEK supporters continued to be present in around 165 cities across Iran. They have been calling for regime change and have condemned the actions of the country’s Supreme Leader Ayatollah Ali Khamenei, Iranian President Hassan Rouhani and the notorious Islamic Revolutionary Guard Corps (IRGC). They have voiced their continued support for the MEK and have condemned the regime’s corruption, mismanagement and policies that have caused huge economic and social problems. They have also slammed the regime for its persecution of the MEK and the lack of fundamental rights and freedoms for the people.

Furthermore, it has been identified that the internet has still be blocked, denying a right that some international figures have highlighted as despicable.

On Thursday 21st November, US President Donald Trump took to Twitter to condemn the regime’s internet blockage. He wrote: “Iran has become so unstable that the regime has shut down its entire Internet System so that the Great Iranian people cannot talk about the tremendous violence taking place within the country.”

In reference to the regime’s brutal response to the uprising, the US President said: “They want ZERO transparency, thinking the world will not find out the death and tragedy that the Iranian Regime is causing!”

The MEK has been instrumental behind the scenes and at the forefront of these protests. The MEK has been receiving messages from people all over the country, detailing the regime’s violence towards protesters. The regime is determined to contain news about the atrocities that are taking place, but the MEK is determined to make sure this does not happen.

With regards to the many martyrs that have lost their lives during the protests, Mrs. Maryam Rajavi, President-elect of the National Council of Resistance of Iran (NCRI) said; “Hail to the martyrs of the uprising. Such unjust shedding of blood only adds to the resolve of the Iranian people to continue their rightful resistance to overthrow the mullahs’ regime.”