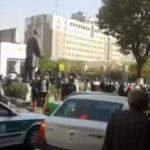 Written by Mohsen Aboutalebi on November 11, 2019. Posted in NEWS 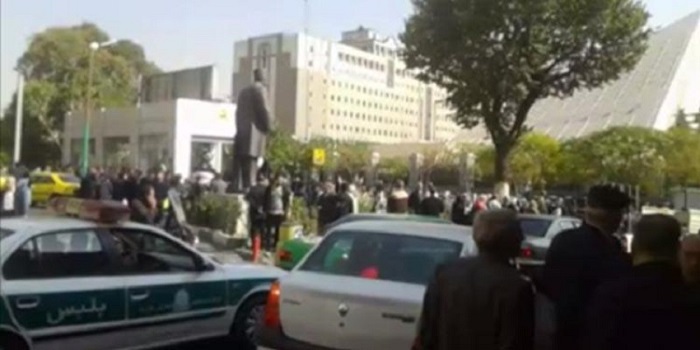 A large number of retirees staged gatherings outside the regime’s Majlis (Parliament)- November 10, 2019

A large group of retirees gathered outside the regime’s Budget and Planning Organization and the Parliament (Majlis) on Sunday in order to protest their appalling living conditions and the failure of their pensions to meet their basic needs. Retirees from many other provinces across the country traveled to join the protests.

The clerical regime tried to stop the protests from taking place and prevent other people from joining the gatherings by blocking the streets leading to the regime’s parliament in order to deny access to the retirees and their supporters. They also stationed hundreds of suppressive forces, over 50 agents riding motorcycles, and dozens of plainclothes agents on location in advance of the gathering to harass, intimidate, and arrest people for protesting.

Despite the mullahs’ suppressive measures, the crowd of retirees, which included many women held their gathering outside Parliament and chanted:

Outside the Planning and Budget Organization, dozens of protesters gathered to have the voices heard, but the suppressive forces of the regime cracked down violently and did not even allow the retirees to speak with one another.

Many protesters were arrested by the regime and had their phones confiscated, even though their only crime was holding a peaceful protest against the Iranian Regime. The mullahs were terrified that the people might release videos or pictures on social media that would expose the regime and go viral so that all the world could see the regime’s abuses.

The Secretariat of the National Council of Resistance of Iran wrote: “The Iranian Resistance hails the protesters and urges the residents of Tehran, especially the young people, to support the retirees. It also calls on the United Nations Human Rights Council and the High Commissioner for Human Rights as well as other human rights organizations to take urgent action to secure the release of those detained.”

July 16 – Tehran, #Iran
Retirees rallying outside the regime's Labor Ministry demanding answers to the requests they have been stating for a long period.#IranProtests pic.twitter.com/ddRH9NwxzG

The Iranian people have been rising up to protest the regime for corruption, humans rights abuses, warmongering, terrorism, and much more besides for nearly two years and the mullahs are terrified that the people will overthrow them because then the regime’s leaders will  be held accountable for their many crimes against the people of Iran, including the 1988 massacre of 30,000 political prisoners. Most of the victims were the members or sympathizers of the People’s Mojahedin Organization of Iran (PMOI, Mujahedin-e Khalq or MEK).