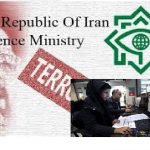 Recently, the Iranian regime claimed that the owner of AmadNews, a so-called opposition website, has been arrested in a “professional”, “Intelligent”, and “polyhedral” mission using “new style intelligent work”. The National Council of Resistance of Iran (NCRI) called this claim stupid, ridiculous, and phony saber-rattling.

The NCRI also mentioned that to spread fear among its own forces, the Iranian regime shoots itself in the foot.

The fake internet and TV alternatives made by the Iranian Regime’s Ministry of Intelligence (MOIS) are run by the regime’s defected forces to prevent joining people to the resistance movement, Mujahedin-e Khalq (PMOI/MEK).

Stand up to the clerical regime and prevent their access to missile programs and any form of arms and equipment. Blacklist the Iranian regime’s Ministry of Intelligence (MOIS) and the Revolutionary Guard Corps (IRGC) in the U.S. and European Union. #FreeIran#Iran pic.twitter.com/0lQH7dQ98T

Running various media under the title of “opposition” is a well-known and Gestapo style tactic of the Cyber Army of the mullahs.

Hashem Khastar, representative of freedom-loving teachers of Iran said on July 21, 2019: “Farzanegan group (another fake media group) has been created by the regime’s cyber Army to hunt freedom loving activists… I asked my colleagues to stay alert”

Mr. Khastar also said that he was forced to take a position against the MEK; he was arrested again three weeks later.

Running a demonizing campaign against the MEK by the fake and hand-made internet network and media has always served to suppress the MEK supporters and resistance units inside Iran.

Another Example of fake internet media

Following the US State Department’s call to raise questions and demands of Iranian people in social media, using thousands of Tweets under the numerous titles particularly “Restart” from cities of Mashhad, Tabriz, Yazd and Tehran, the Iranian regime’s cyber Armey tried to mobilize its forces running a fake news campaign against the MEK.

Mohammad Hosseini, the owner of Restart, started servicing the Iranian regime beginning with the state-run TV and continued in the United Arab Emirates(UAE), Cyprus, and finally the US.

In an interview with a TV channel stationed in Los Angeles, he acknowledged that the MOIS agents in a meeting in the UAE “kindly” asked him to run a TV station.

Spending millions of dollars, the Iranian regime resorts to running fake and phony Internet networks and media channels as well as making hundreds of movies and publishing more than a thousand books in a demonizing campaign against the MEK. Mullahs desperately try to prevent the wave of the Iranian youth and women joining the MEK. The popularity of the MEK is a nightmare for the medieval regime ruling Iran.

#Iran's regime growing ever more concerned about the PMOI/MEK's popularity inside the country.#IranRegimeChangehttps://t.co/YHK29LGvcC

The maturity of the population and the activities of the MEK resistance units have left no room for the mullahs to deceive the people.