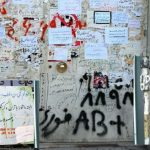 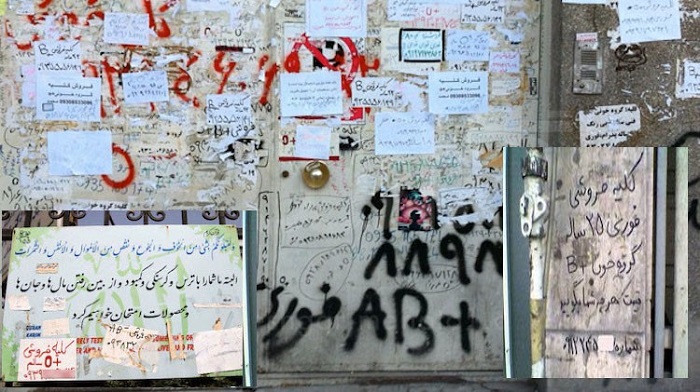 A wall in Farhang Hosseini alley filled with selling and buying advertisements for body organs.

Thousands of people in Iran are being forced to sell their body parts, including livers, lungs, bone marrow, blood, kidneys, and corneas, on the growing black market, according to opposition activists.

The National Council of Resistance to Iran (NCRI) provided a dossier detailing allegations of the shocking trade, which has turned into a “lucrative business”, to the Daily Star Online.

The Iranian activists, who are living in exile, said that the economic strain in Iran is why thousands of people are desperate enough to sell their organs, which can go for up to $50,000.

NCRI spokesman Shahin Gobadi described this as an “untold catastrophe” and a “systemic problem”.

He added: “The tragedy of Iranians, especially the youths, selling their body parts to survive or to address their own basic needs or those of their families in a country like Iran that has seven percent of the world’s natural resource is an untold catastrophe.”

The dossier includes photos of graffiti, where people have advertised their organs on buildings near hospitals, and a website which advertises the buying and selling of organs via “organ brokers”, who prey on the desperation of both buyer and seller. Messages on this site include:

Most of those selling their organs are aged 22-34 and are encouraged to submit their blood group, mobile number and personal details to the broker.

The NCRI spoke to one dealer, who said that organ brokers can earn up to $56,000 a month, who admitted preying on the poor and even the families of “brain-dead patients” in hospitals.
The dealer said: “Most of those who sell their kidneys are from the lower strata of the society. I find them through friends who live in small towns or poor suburbs. Subsequently, they are satisfied and the price is set. Of course, they are introduced as the donor and the acquaintance of the patient to make the job easier.”

Kidneys are the most in-demand, with blood plasma and livers being more expensive. Here is the price per body part on the black market:

Tehran is reportedly the center of the organ trade, with an alley known as “Kidney Street” and the area is tagged with numerous A4 sheets of paper counting personal details of people selling their organs.

Gobadi said that the Iranian Regime had pillaged the country’s resources and spent billions running “proxy wars” in Yemen, Lebanon, and Syria.

He said: “It is very telling that the painful trend of selling body parts continued and even intensified following the signing of the Iran Nuclear Deal, which released more than 100 billion dollars and enabled the regime to sell more than two million barrels of oil on a daily basis. As the Iranian Resistance said at the time, this windfall was not spent on improving the abysmal living conditions of the Iranian people.”

He continued: “Through embezzlement, theft and astronomical pillaging of these resources, the Iranian regime’s leaders have devoted most of these resources to suppression at home and export of terrorism as well as financing terrorist groups, fomenting proxy wars in the Middle East and working to obtain weapons of mass destruction.”