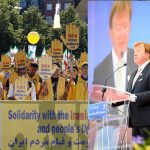 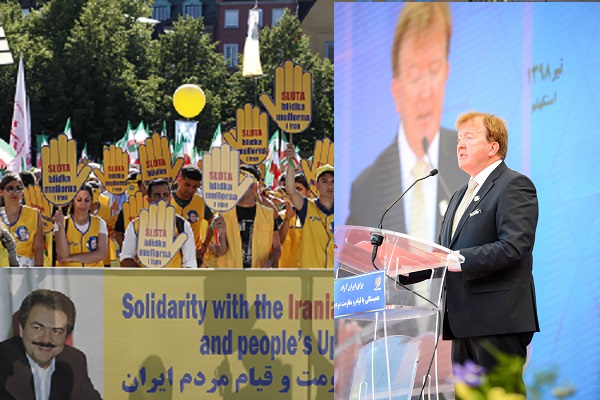 Former Irish Minister and member of the parliament, Mr. John Perry, speaking at MEK’s rally in Stockholm- Demonstrators, hold a banner, with Massoud Rajavi and Maryam Rajavi’s photo in the front row, calling for solidarity with the Iranian people’s uprising for a free Iran-July 21, 2019

The Iranian regime poses a threat to peace and stability in the Middle East and across the world, and Europe should support the main Iranian Opposition as the democratic alternative to the mullahs’ clerical dictatorship, writes former Irish Member of Parliament John Perry in an op-ed for the Eurasia Review.

In his August 29th opinion piece, the former lawmaker and Minister of State for Small Business wrote that the Iranian regime is “extremely unpopular among both Iranians and regional countries, and is today the greatest threat to a prosperous Iran and to stability and peace in the Middle East and the world.”

According to Mr. Perry, the regime and the Revolutionary Guards (IRGC) have persecuted, tortured, and killed countless Iranians over their 40-year rule. He cited the 1988 Massacre of 30,000 political prisoners, most of whom were MEK members, as his prime example.

“The IRGC’s destabilizing interventions in the region have resulted in hundreds of thousands of innocent people being killed and have displaced millions,” he wrote.

“A key component that has been overlooked for too long is the organized Iranian opposition,” Mr. Perry continued. “Thousands of Iranians recently rallied in London to remind participants in that debate, particularly in Europe, of the democratic aspirations of the Iranian people and their coalition of opposition, the National Council of Resistance of Iran (NCRI).”

Perry explained that the MEK “played a major role in organizing and promoting a nationwide uprising at the beginning of 2018,” forcing even Supreme Leader Ali Khamenei to acknowledge their role in popularizing the message of regime change.

“More and more Iranian officials have been speaking publicly about the MEK in a way that it is evident Tehran recognizes the challenge it poses to the theocratic system. Such trends leave Western policymakers with no excuse for ignoring the resistance or denying the potential for domestically-driven regime change,” Perry emphasized.

Mr. Perry stressed that the Iranian Resistance has not asked for either financial or military support. “They have simply called on the EU to adopt a firm policy on Iran and to designate the regime’s Supreme Leader, Islamic Revolutionary Guards Corps, and Ministry of Intelligence as terrorist entities,” he wrote.

“No Iran expert or Western diplomat can seriously dispute the fact that these entities are involved in terrorism abroad and have been responsible for domestic repression since the 1979 revolution,” he added.

Perry noted that the National Council of Resistance of Iran (NCRI) has strong support both within Iran and well as among politicians across the world.

“Its progressive leader Maryam Rajavi has presented a 10-point plan for the future of Iran, which envisions and guarantees a free, democratic, secular, non-nuclear and peaceful Iran, with an independent judiciary system that respects the Universal Declaration of Human Rights,” he stated.

“Maryam Rajavi’s vision for Iran’s future will surely be beneficial to the interests of the entire international community and I am convinced that the Iranian people and their resistance movement are our best allies for bringing that future about,” Perry continued.

The mullahs’ nuclear & missile programs, warmongering & terrorism are consequences of the appeasement policy which must no longer continue. Just as giving immunity to the perpetrators of the #1988Massacre must also be stopped. #Iranhttps://t.co/FnzTnVG2Ro pic.twitter.com/WPWhQWxTn7

Support from the International Community

Mr. Perry wrote that the regime is currently at the weakest point in its 40-year history, and the NCRI believes that regime change is now within reach by the Iranian people. “Thus, the EU does not need to directly engage in the process, but must only put pressure on the Iranian regime and hold its leaders to account for their atrocities and terrorism at home and abroad,” he explained.

“This does not equate to encouraging conflict or war but rather signals to the Iranian people and their Resistance movement that it has the support of an international community that recognizes the people’s aspirations for freedom and democracy,” Perry added.

Meanwhile in Iran, workers and defrauded investors held at least eight protests over the course of two days to demand basic economic rights. The protests are emblematic of the growing unrest among the Iranian people as the regime continues to weaken.

Widespread corruption among Iran’s businesses, approximately half of which are controlled by the regime’s Revolutionary Guards (IRGC), has led to constant protests by defrauded credit customers and investors. Protests this week were held by defrauded creditors of the Shadi Gold Institution, defrauded buyers of Ramak Khodro cars, and defrauded members of the Tehran Electrical Workers’ Housing Cooperatives.

Workers and pensioners also held a number of protests demanding their unpaid wages and pensions and striking for basic rights as workers. Protests were held by workers at HEPCO and  Farabi Petrochemical Company and pensioners at Western Azerbaijan Telecommunications company.