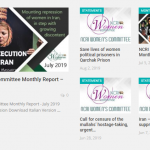 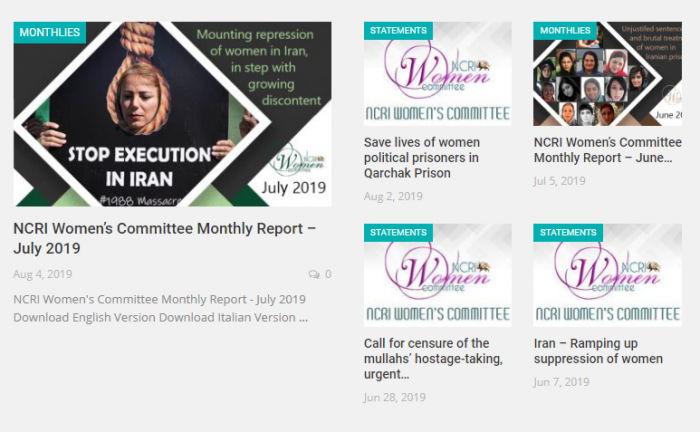 The Iranian regime engulfed in deep crisis due to the growing protests led by MEK and strikes across the country and the dying economy has stepped up its persecution of Iranian women this July, with four women being executed in the matter of a week. Based on the July Monthly report of the Women’s Committee of the National Council of Resistance of Iran, this unprecedented act by a regime, that continues to infringe on the basic human rights that should be afforded to its’ people, marks the brutish and callous nature of a judiciary that is intent on silencing any opposition to its rule.

Beset by a whole host of economic, social and political crises, the clerical regime has been trying to rein in simmering social discontent by use of brute force.https://t.co/Pf4crh94Wz

Based on reports from MEK sources inside Iran, during the course of July, more than 100 women have been wrongfully imprisoned, tortured and abused for little more than protesting against the oppressive conditions that have been imposed on Iranian society at large, and women specifically.

All the more concerning is the breach of the separation of the prisoners’ principle wherein political prisoners are not only unfairly sentenced but are also imprisoned with the rest of the criminal population held in prison. With the misogynist Iranian regime refusing women the right to divorce and removing themselves from abusive relationships they have forced them into the limited alternatives of murder or suicide. A letter supporting this assertion, which was written by former political prisoner Golrokh Iraee and published on 27 July 2019 details how due to the “years of being humiliated, insulted, battered and even tortured” domestically and “because of being deprived of their right to divorce” they were driven to commit suicide, despite this, “they are convinced that if any of their repeated appeals for divorce had been granted, they would not have committed such suicide”, explains the Women’s committee’s report. 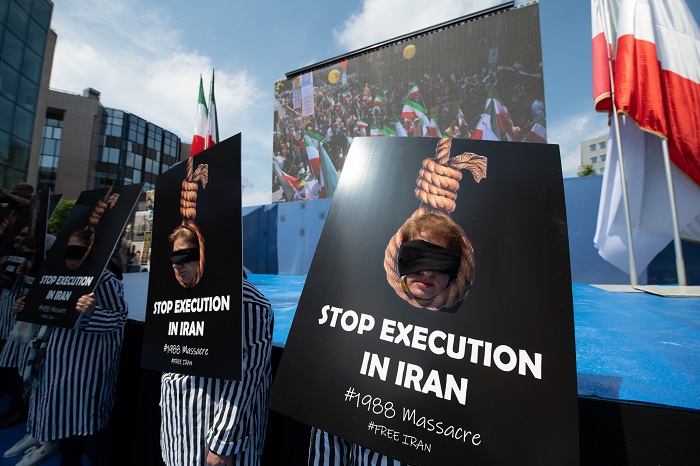 MEK protests against the death penalty in Iran

Execution of women and the heavy hand of the unjust judiciary

During the 6 years of Rouhani’s tenure, a record-breaking 93 women have been executed making it the deadliest regime for women worldwide.

Maliheh Salehian, Zahra Safari Moghaddam, Arasteh Ranjbar and Nazdar Vatankhah were the four women that lost their lives during this outrageous week of violent executions. These executions were an act of intimidation to prevent the public’s uprisings.

Many women who have been apprehended and tried for political ‘crimes’ are given inexcusably long sentences. Female activists, Golrokh Iraee and Atena Daemi have both been sentenced to 1.5 years in prison for disseminating “propaganda against the state” by sending open letters out of prison, and to 2 years and 1 month for “insulting the leader (Ali Khamenei).”

A young student activist, Sepideh Farhan (Farahabadi), was sentenced to 6 years in prison and 74 lashes by Branch 36 of Tehran’s Court of Appeal for participating in student protests in January 2018.

Yasaman Aryani, Monireh Arabshahi, and Mojgan Keshavar were collectively sentenced to 55 years and 6 months in prison. The charges leveled against these women included, “association and collusion against national security, disseminating propaganda against the state and encouraging and preparing the grounds for corruption and prostitution” among others.

There have been more than a 100 new arrests in July, and it seems the Iranian regime is set to ramp up its prosecution and imprisonment of women. Of the women arrested this month, many were charged with flouting the mandatory veil laws and breaching the rules of “Chastity and Hijab”. More detail is included in the July report.

Brutality and victimization of political prisoners

It should come as no surprise that prisoners are ill-treated and battered within the Iranian regime’s prison system but the extent of abuses is unrivaled. Many women are forced to make confessions during violent interrogations, while others are beaten into submission by guards. Many of these women are refused medical care for the physical damage caused to their persons during these violent encounters. 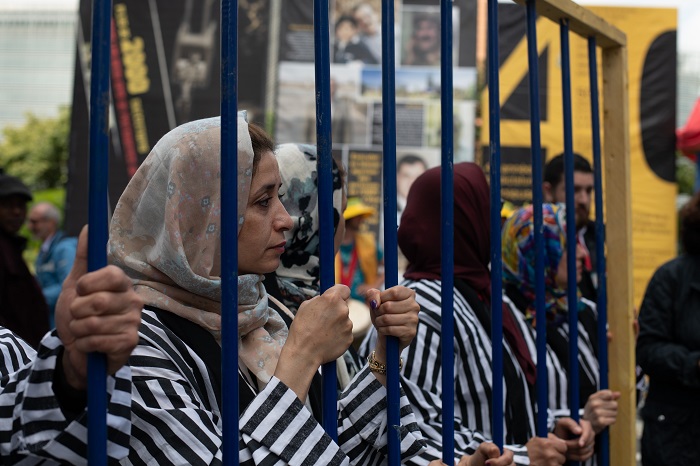 Yasaman Aryani and Atefeh Rangriz were among the women who were beaten by other prisoners, who had been incited by prison guards to carry out the attack. Yasaman Aryani was left with multiple injuries while Atefeh Rangriz, who suffers from asthma, had to be taken to the dispensary due to her critical condition.

The toll oppression and poverty has taken on mental health

Nazanin Zaghari, another political prisoner who came to visit her family in Iran 3 years ago was recently transferred to the psychiatric ward from Evin Prison. Commenting that she was “healthy and happy” when she arrived but now hates the toll “being played in the middle of a political game” has had on her mental health and personal freedom.

Sanaz Allahyari and her husband, both prisoners of the Iranian regime, have resorted to a hunger strike in protest against the Iranian dictatorship. According to a statement released by Amnesty International on July 3rd, “Sanaz Alahyari has been suffering from recurrent stomach pains, weight loss, and severe shaking in her hands and legs for at least two months, and urgently requires medical treatment.”

The continued oppression and subjugation of women has led those not imprisoned but still shackled by extreme poverty, created by the regime, to resort to suicide. At least 15 women committed suicide in July as a method to escape abject poverty. Reports have confirmed a shocking case in Yazd, where a woman and her two young daughters set themselves on fire on July 28, 2019.

Recognizing the price all these women have paid and continue to pay in their fight to bring justice and democracy to Iran may feel sadly empty. Especially, as we see the regime tightening its fist of domination and cruelty around the Iranian people. It is because of this commitment to ensuring basic human rights for all the people of Iran that it is important that we shed light on what these women are enduring. It should be publicly known and acknowledged what the Iranian regime continues to do to its own people.

For more details on the unjust and unfair mistreatment of women in Iran, you can read the monthly report here.