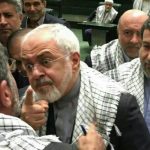 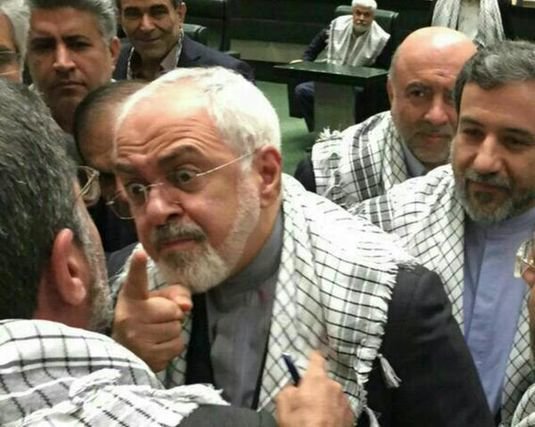 Photo Archive: A true face of the always “laughing” Javad Zarif and his Deputy Araghchi (first rights) during a fight in Regime’s Majlis (parliament).

Last week the United States Treasury Department imposed sanctions on Iranian regime Foreign Minister Javad Zarif for his role in carrying out the regime’s criminal policies and terrorist activities. The mullahs responded to the sanctions with anger and frustration, calling on U.N. Secretary-General Antonio Guterres to condemn the act, according to a Reuters report.

Recently, President @realDonaldTrump sanctioned Iran’s Supreme Leader, who enriched himself at the expense of the Iranian people. Today, the U.S. designated his chief apologist @JZarif. He’s just as complicit in the regime’s outlaw behavior as the rest of @khamenei_ir’s mafia. pic.twitter.com/XhDdqR6rik

Majid Takht-e Ravanchi, the Iranian regime’s Ambassador to the U.N., wrote a letter to Guterres this week accusing the U.S. of a “brazen violation of the fundamental principles of international law.” He urged the U.N. to take action against the United States.

The U.S. Department of the Treasury’s Office of Foreign Assets Control (OFAC) described its reasons for the designation in a statement, dated July 31, 2019:

“Javad Zarif implements the reckless agenda of Iran’s Supreme Leader, and is the regime’s primary spokesperson around the world. The United States is sending a clear message to the Iranian regime that its recent behavior is completely unacceptable,” said Treasury Secretary Steven T. Mnuchin. “At the same time the Iranian regime denies Iranian citizens’ access to social media, Foreign Minister Javad Zarif spreads the regime’s propaganda and disinformation around the world through these mediums.”

The sanctions against Zarif are the latest in a series of actions taken against the Iranian regime as part of the United States’ “maximum pressure” campaign. The U.S. Treasury imposed sanctions on the Islamic Revolutionary Guards Corps (IRGC) and Regime Supreme Leader Ali Khamenei earlier this year.

The MEK and National Council of Resistance of Iran (NCRI) have called repeatedly for sanctions to be imposed against Javad Zarif because of his role in the regime’s terrorist activities and suppressive policies. Zarif has been called a “moderate” and an “’experienced diplomat’ by many U.S. officials who hoped that he might prove capable of negotiating peace between the United States and Iran. He branded himself as the calm voice of the regime, while he justified Iran’s policies on state-sponsored terrorism, warmongering in the Middle East, nuclear missiles, and attacks against the MEK.

The current U.S. administration has chosen to break with this policy and sever ties with Zarif.

“Javad Zarif oversees a foreign ministry that has coordinated with one of the Iranian regime’s most nefarious state entities, the IRGC-Qods Force (IRGC-QF), which is designated pursuant to terrorism and human rights authorities,” said U.S. Treasury Secretary Steven Mnuchin in the statement announcing new sanctions.

Regime President Hassan Rouhani responded to the sanctions with confusion. “They are talking about negotiation and at the same time they sanction the foreign minister,” he said. “If they want to negotiate, is there any other channel than the foreign ministry?”

The Iranian regime has been severely weakened by the series of sanctions imposed by the United States and is close to its breaking point. Its response to these sanctions has been to intensify suppression at home and to escalate its aggression toward the international community. The situation is volatile, and appeasement is unlikely to prevent further hostility.

Morally, it is wrong to provide financial support to a regime that murders its own people and exports terrorism. Logically, it is unwise to support a regime that uses its embassies to plot terrorist attacks across the world.

Zarif & his ministry’s role is to justify suppression, export of terrorism & warmongering. He boasts being friend to Ghassem Soleimani, Bashar Assad & Hassan Nasrollah. His ministry along with Khamenei’s office, Rouhani &MOIS must be included in the terrorist list. #Iran pic.twitter.com/2aEAhhoSs2