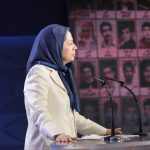 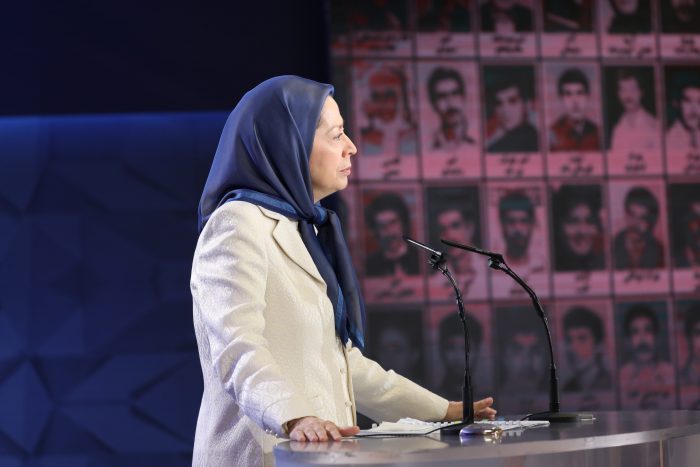 Maryam Rajavi, the President-elect of the National Council of Resistance of Iran (NCRI), speaking at the conference “Calling for Justice for the 1988 Massacre” – Ashraf3 the MEK’s compound, Albania- July 15, 2019

Maryam Rajavi, leader of the Iranian opposition speaking at the conference “calling for justice for victims of the 1988 Massacre” said that Khomeini, the Iranian regime founder’s intention for ordering the 1988 massacre was to uproot the MEK.

The final day of the Free Iran Conference at Ashraf 3, the People’s Mojahedin Organization of Iran (PMOI /MEK)’s headquarter in Albania, on Monday, July 15th, was devoted to the topic of the 1988 Massacre of 30,000 political prisoners by the Iranian regime.

In the summer of 1988, Ruhollah Khomeini issued a fatwa calling for the execution of all MEK members imprisoned in Iran. He formed three-member Death Committees in prisons across the country to carry out trials that lasted only minutes. Prisoners were executed in groups and buried in mass graves.

To date, none of the perpetrators of this crime against humanity have been brought to justice. Many of those responsible have gone on to hold high-ranking positions within the regime.

The massacre of political prisoners was a blood-drenched encounter between the Middle Ages and a generation which created the 1979 revolution, a generation resolved to achieve a society based on freedom & equality, but encountered the monster of religious fascism. #Iran pic.twitter.com/z5PNzne3UF

On Monday, survivors of the massacre shared their testimony of the brutal crime against humanity, and political dignitaries, human rights activists, and members of the NCRI and MEK discussed the urgent need to hold the perpetrators of the mass executions accountable for their crimes. Mrs. Maryam Rajavi delivered the keynote address.

“The massacre of the MEK and the other combatants and political prisoners was a blood-drenched encounter between the Middle Ages and tomorrow’s generation: the generation that created the 1979 Revolution, who represented a nation resolved to have a society based on freedom and equality but ran into the monster of religious tyranny and invasion of pillage and repression. The massacre of 1988 was the horrifying scene of such historic confrontation, but it was not the end, despite its excruciating pain and agony. It was the beginning of a new confrontation which still continues and will ultimately write the fate of the Iranian nation with the word ‘freedom,’” said Mrs. Rajavi.

“Khomeini’s intention in ordering the 1988 Massacre was to uproot and obliterate the MEK…The most intense killings began in Evin and Gohardasht Prisons and were specifically aimed at MEK members,” she said.

Mrs. Rajavi stated that the 1988 Massacre was carried out in 110 cities in Iran and that those cities have become hotbeds of protests and uprisings. “It is no accident,” she said, that these cities are now the scenes of resistance by Iranians of every ethnicity, religion, and sector of society.

“The time has come for the United Nations to form an international fact-finding mission for the 1988 Massacre, and the world to recognize the right of the people of Iran to resistance and struggle to overthrow the mullahs’ religious dictatorship,” said Mrs. Rajavi.

“I call on all Iranians in Iran and abroad to help advance and expand the Call for Justice movement for the victims of the  1988 Massacre. This is the movement of the oppressed, the suppressed and the bereaved,” she stressed.