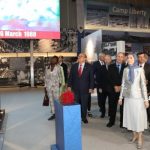 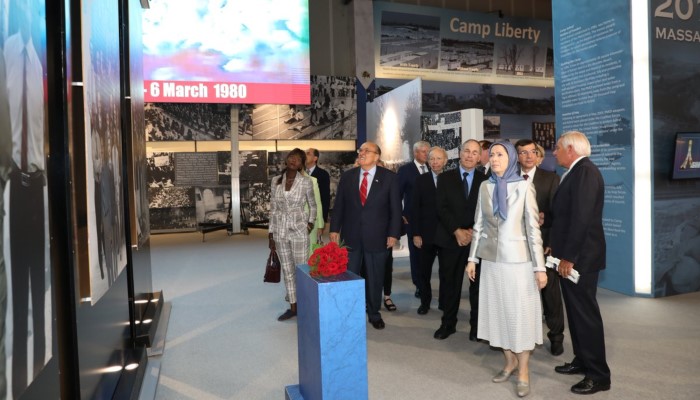 The MEK hosted the second day of an international conference on Friday at Ashraf-3, the home of the Iranian Resistance’s headquarters in Albania. The conference, entitled “120 years of struggle of the Iranian people for freedom,” was attended by thousands of MEK members and prominent politicians and dignitaries from around the world.

The conference’s focus was to condemn the Iranian regime for its suppressive and inhuman actions at home and its terrorist activities abroad and to call on the international community to end the policy of appeasement that allowed the regime to act without consequences.

Speakers at the conference also emphasized that the international community must recognize the MEK and NCRI as the democratic alternative to the mullahs’ regime in order to bring peace and stability to the region.

The following are some of the highlights from the speeches at Friday’s event:

President-elect of the National Council of Resistance of Iran (NCRI)

“One of the missing links in previous movements of the Iranian people was a coherent organization and an organized struggle, coupled with a determined and battle-hardened force prepared to make any sacrifice necessary. As a result, the people’s previous struggles did not succeed despite all their sacrifices,” she said in reference to the failure of past uprisings.

Mrs. Rajavi also spoke about the many crimes perpetrated against the MEK by the mullahs’ regime.

“Despite all the crimes and massacres he committed, Khomeini failed to extinguish the flames of freedom. Over the past 40 years, 120,000 persons have given their lives for the cause of freedom. That includes the 30,000 people who were massacred in 1988 for insisting on their political identity as a member of the Mojahedin. Another half-a-million people were arrested and viciously tortured,” she said.

“The mullahs continued their crimes against Ashraf and Liberty by setting 22 deadlines in 10 years, through a medical blockade, through psychological torture using over 300 loudspeakers blaring into Ashraf for two years, and through 29 ground and aerial attacks, using armored vehicles and missile launchers, including the commission of seven bloodbaths and massacres,” she continued.

Mrs. Rajavi concluded on a hopeful note, saying, “But today, we have reached a historic turning point. An Ashraf which has once again risen up, proud and powerful, shining bright at the zenith of this Resistance. This Ashraf has been replicated 1000 times in the form of resistance units all over Iran. And a volatile society which is no longer willing to put up with the mullahs, yearning to overthrow them.”

MEK member and resident at Ashraf-3

“I grew up in Sweden and was about to travel to France to study, but a video that I’d seen couldn’t leave my mind; a video of someone being stoned to death in Iran. I saw myself at a crossroads. I could live my own life and fulfil my dreams or I could put everything aside and fulfil my people’s dreams. That’s why I joined the MEK, to live for others. I thank all of you for being with us,” she said.

French-Colombian politician Ingrid Betancourt tells Iran's democratic opposition: “I’m proud of what you've achieved in Ashraf 3. As a woman I feel very proud of standing w/ you since there's no other org like the MEK that gives women this power” #FreeIran #IStandWithMaryamRajavi pic.twitter.com/99C823z9w7

“It’s just amazing what the MEK has done to transform this place since the last time I visited. I am proud to be your friend,” said Ms. Betancourt. “Your decision to confront the tyranny and pay the highest price. This sacrifice today is bearing its fruit. I see that here in Ashraf 3. It’s a miracle. I have been with you for a couple of years and I am amazed by your support and your political savviness. As a woman, I feel very proud and that in the world there is no organization like the MEK that gives women this power.”

“We are making history today,” she added. “Your victory is our victory and we will be very soon with you in Tehran!” Ms. Betancourt proclaimed.

"We could have prevented the Holocaust. We can't now. We can just learn from it. But we can prevent the murder and slaughter going on in Iran. An alternative exists to the theocracy in Iran. It's our responsibility to support it" – @RudyGiuliani #FreeIran #IStandWithMaryamRajavi pic.twitter.com/MNvv2h5xQP

“There is an alternative to the theocracy and dictatorship in Iran. It is a government-in-exile, and it gives us the confidence that if we help overthrow the Iranian regime, there will be prosperity and democracy in Iran,” said the former mayor.

“I thank Madam Maryam Rajavi for letting me be part of this, and this is something that I am proud of and probably my children will be proud of…I wish to have this meeting in Tehran before I die,” Giuliani said.

"The museum in Ashraf 3 is an echo of the Holocaust" – @JoeLieberman at the conference on the Iranian people's struggle for freedom in Iran, today in Ashraf-3, Albania. #FreeIran #IStandWithMaryamRajavi pic.twitter.com/02Jh6mr5Cu

“You in the NCRI have given us the opportunity to be true to our national principles. When I’m here I feel that I’m representing the spirit of my great friend, the late Senator John McCain, who was warned by the establishment to stay away from this organization, but he spent time learning about it. He came to Ashraf 3, believing in this organization and its cause,” said Lieberman.

“Ashraf 3 has become something magnificent. Coming here and seeing this magnificent community that you’ve built is miraculous. It teaches us lessons,” he continued.

Lieberman praised the Ashrafis for their perseverance, saying, “The citizens of Ashraf never gave up despite the atrocities they faced imposed by the Iranian regime.”

He also talked about the exhibition of the history of MEK members who have been killed and persecuted by the Iranian regime that he and other speakers viewed before the conference began: “This exhibition, despite the mourning, is inspiring. And the whole story of the Ashrafis is inspiring,” he said.

“With the kind of leadership that the MEK and Maryam Rajavi are giving and will give in Iran; with the support of people from around the world who are represented here and with the resistance of the Iranian people inside of Iran, we will have a meeting some day in Iran and come together and have a great party,” Lieberman concluded.

Alliot-Marie referenced the MEK memorial, saying, “I have to say that I’m very moved. What a contrast between the dramatic, horrifying images that we saw a few minutes ago. To be in contact with men and women who have given their lives for such a cause. To see what you have been able to achieve. You wish to give so much to the Iranian people.”

“You have people who have been tortured yet you still pave the path for freedom. This visit to Ashraf 3 was very moving for us,” she continued.

“I have the privilege of being able to speak and think freely. Yet I also know that today this liberty is not available everywhere across the globe,” Alliot-Marie said.

“We are also obliged to all people who are being subjugated to dictators around the world, and in Iran. We are here today, Mrs. Rajavi, to tell you that you are not alone,” she said.

“We have to give the Iranian people courage and the help they need so they can get their future back,” Alliot-Marie concluded.

“Maryam Rajavi's 10-point plan for a future #FreeIran is what we want for all Iranians” – former French Foreign Minister @MAlliotMarie at today's Iran conference in Ashraf-3 in Albania with members of Iran’s democratic opposition, the MEK. #IStandWithMaryamRajavi pic.twitter.com/fSuXflnhyE

“You are the proof of a proud brave nation that will never succumb to the atrocities of the regime,” Offord said, addressing the MEK members at the conference.

“We have always argued that decoupling the regime’s human rights violations from the nuclear deal was a mistake,” he said.

“We have been proven right that there is no moderate faction inside the Iranian regime.” he added.

“There are two issues that we continue to raise in our debates,” Offord said:

“This measure will signal to the Iranian people that they are not forgotten and we stand with them,” he emphasized.

Offord added, “We want to recognize the right of the Iranian people and the resistance led by Madame Maryam Rajavi to establish a democratic and free republic in Iran.”

“Iran’s current regime is not just a threat to the Iranian people but to the peace around the world,” he concluded.

“I participated in a policy panel in Ashraf 3 and we were invited to dinner with the ladies of Ashraf 3. And some of them shared with me their stories of sacrifice and suffering. What I saw last night in terms of the ability to endure loss and yet move on was the sense of unit cohesion and dedication to each other that was the same as you see in the military. The sense of mission and dedication to accomplish it, said General Conway.

“I’m absolutely confident that with those ladies, you will make your country free someday,” he added.

“@RudyGiuliani was correct that the solution to Iran is not appeasement but regime change. Throughout history there are always tyrants & for a while they seem invincible. But they all fall at the end. Always” Mojgan Parsaie, ex PMOI (MEK) Sec Gen #FreeIran #IStandWithMaryamRajavi pic.twitter.com/WfUdmjosdO

“The story of the supporters of Ashraf who helped rescue the MEK members is the story of honorable people,” said Ms. Parsaie.

“Time has shown that you stand on the right side of history. The future will show more appreciation,” she added.

“Mayor Giuliani was correct that the solution to Iran is not appeasement but regime change. Throughout history there are always tyrants and for a period they seem invincible. However, they all fall at the end. Always.” Ms. Parsaie concluded.