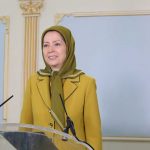 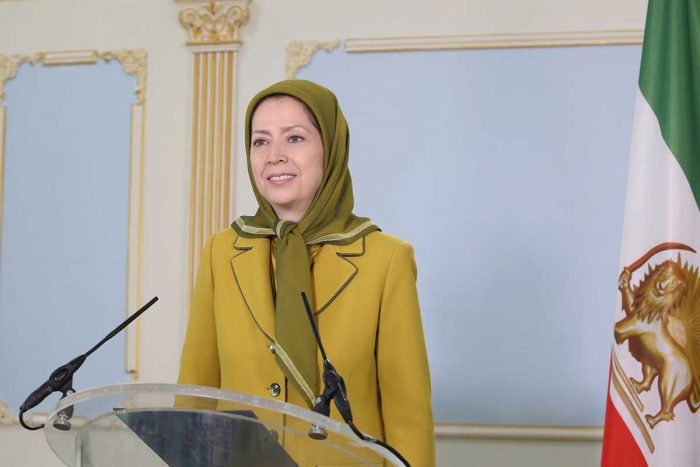 Maryam Rajavi, the President-elect of the Iranian opposition, addressing thousands of MEK supporters in Brussels via video, during the Free Iran Rally-June 15, 2019

Thousands of members of the MEK and the Iranian Resistance gathered in Brussels on June 15, 2019, for the first in a series of Free Iran rallies. Mrs. Maryam Rajavi urged the European Union to impose comprehensive sanctions on the Iranian regime and reaffirmed the strong desire of the Iranian people for a free and democratic Iran in her keynote address at the rally.

The Overthrow of the Regime

Mrs. Rajavi spoke strongly about the rising anger in Iran toward the mullahs’ corrupt regime, noting the parallels between the current situation and the chaos leading up to the overthrow of the Shah.

“The decadent regime of the mullahs is surrounded by infuriated people fed up with the status quo, to the extent that just like the final days of the Shah’s regime, Majlis deputies openly express their alarm during the parliamentary sessions, one after the other warn against the regime’s calamitous destiny,” she said. “They openly challenge the regime’s president and dare him to eat like the rest of the people for just one month to see if he can tolerate such conditions.”

Mrs. Rajavi pointed out that regime President Hassan Rouhani and his ministers say that the current crisis is the worst the regime has faced in forty years of the mullahs’ rule. Rouhani blames Supreme Leader Ali Khamenei for the country’s problems, and Khamenei faults Rouhani, but Mrs. Rajavi emphasized that there is little difference between the two leaders.

“At the helm, the white turbaned mullah [Rouhani] blames the black turbaned mullah [Khamenei] for the faults, demanding more authority. But Khamenei’s response was that they should prepare to convene a solid Hezbollahi government,” Mrs. Rajavi explained.

“For the people of Iran, however, there is no difference between black turbans and white turbans. They want the overthrow of the entire regime and they cry out, ‘Our enemy is right here,” she added.

Mrs. Rajavi went on to state that the Iranian Resistance would happily welcome anyone who claimed to have an option that could “change the behavior of the mullahs’ religious fascist regime by offering economic and political incentives without budging on the human rights of the people of Iran and their right to sovereignty.”

Recognition of the Iranian Resistance

In her speech, Mrs. Rajavi said that polarization between pro- and anti-regime groups is increasing as the regime nears its final days. She stated that those who wish to preserve the regime or appease the mullahs express concern that any decisive measure will lead to war. Mrs. Rajavi answered these concerns with words from Massoud Rajavi.

“As Massoud Rajavi says, those concerned about the fate of the Iranian regime keep warning against the outbreak of war at any decisive juncture. ‘While the worst likely mistake for the U.S. and the international community to make with regard to the clerical regime is trying to avoid a war,’” Mrs. Rajavi quoted.

She continued: “He adds, “Four decades of experience show that the worst mistake is budging and hesitating to hit the head of the serpent with a rock. Without this, i.e. overthrowing this regime, Iran could not be freed. And this is a duty solely on the shoulders of the Iranian people and their Resistance. Therefore, it is imperative to recognize the right of the people of Iran to resist against and overthrow the mullahs’ regime.’”

Mrs. Rajavi stressed that the regime has attempted to preserve their rule by demonizing the MEK, whom they see as an existential threat.

“By demonizing the Mojahedin, the regime seeks to arrange the scene such that everyone concludes that the clerical regime is better and is what the Iranian people deserve,” she said. “So, they would be better off to give up resistance and continue their life in misery.”

Mrs. Rajavi listed some of the regime’s terrorist activities in Europe in 2018, including attempted bombings in Albania and France, the arrests of regime mercenaries and regime diplomat Assadollah Assadi, and the expulsion of four regime diplomats from Europe. She pointed out that the Iranian Resistance has repeatedly warned that the Iranian regime’s embassies were used to carry out terrorist plots.

She then called on the European Union to take action in light of these terrorist plots and the regime’s past crimes against humanity.

“We demand that the regime’s terrorist diplomat arrested in Belgium be prosecuted as soon as possible. This is the right of Iranian refugees to learn the details of the mullahs’ terrorist plots in foreign countries. And this is requisite to any effort to prevent similar incidents in future,” Mrs. Rajavi said.

“We call on the European Union to impose comprehensive sanctions on the theocratic regime ruling Iran, and to designate the mullahs’ Revolutionary Guard Corps (IRGC) and their Ministry of Intelligence (MOIS) as terrorist entities. The regime’s mercenaries must be tried, punished and expelled,” she added.

We call on the European Union to impose comprehensive sanctions on the theocratic regime ruling #Iran. #FreeIranhttps://t.co/vae0xczcQ3

Mrs. Rajavi also demanded that the regime be held accountable for the 1988 Massacre of 30,000 political prisoners. “The regime’s leaders must face justice in an international tribunal and account for their crimes against the people of Iran and particularly the massacre of political prisoners in 1988,” she said.

The clerical regime’s leaders must face justice in an international tribunal and account for their crimes against the people of #Iran and particularly the #1988Massacre of political prisoners. #FreeIranhttps://t.co/vae0xczcQ3 pic.twitter.com/XO4UwemX7Z

Mrs. Rajavi concluded her speech by emphasizing that as the regime becomes weaker, the resistance must grow stronger.

“The sensitivity of the present juncture and the increasing weakening of the clerical regime place the burden of responsibility on the shoulders of each and every one of us,” she said. “Beyond the shadow of a doubt, the ruling regime cannot withstand our nation’s resistance and uprisings and their great Army of Freedom.”