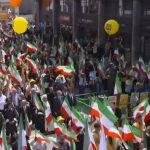 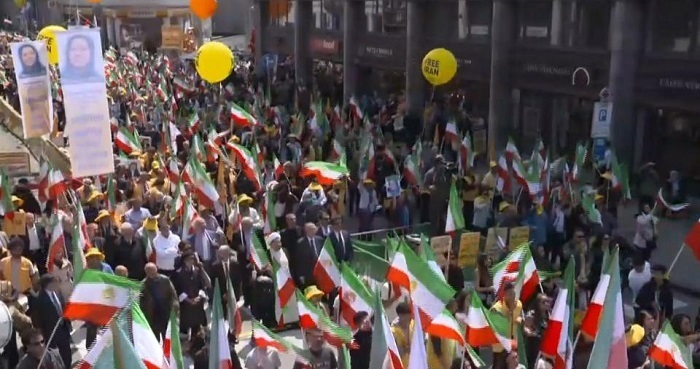 Supporters of the MEK, rally in Brussels in solidarity with Iran protests and in support of the Iranian resistance.

On Saturday, June 15, thousands of Iranians from across Europe convened in Brussels to make a statement to the EU on its handling of the Iranian regime. The rally denounced the regime’s blatant human rights abuses and use of international terrorism as a mechanism for statecraft.

Participants in the rally marched in the streets of the European capital in support of the People’s Mujahedin Organisation of Iran (MEK), the largest pro-democracy Iranian opposition group.

The NCRI President-elect Maryam Rajavi addressed the protestors in a video message. She said: ““The decadent regime of the mullahs is surrounded by infuriated people fed up with the status quo, to the extent that just like the final days of the Shah’s regime.”

The regime has not faced such pressure in its four decades of existence. She added, “The people of Iran want the overthrow of the entire regime and they cry out, ‘Our enemy is right here.’”

She told those gathered that the MEK would be open to any solution, even those through economic and political means, to curb the mullahs’ behavior. However, she made clear that human rights protections and the Iranian people’s right to sovereignty would have to come first.

Hail to the brave men and women of the resistance units and popular resistance councils who have formed this long line all across #Iran. Hail to you who have extended this line to Europe in front of the European Union’s headquarters in #Brussels. #FreeIran pic.twitter.com/9eO0rfglYp

After four decades of watching the murderous and tyrannical regime operate with impunity in Iran, Maryam Rajavi, the MEK and the entire Iranian opposition movement are now convinced that the only way to protect Iranian human rights and sovereignty is with the overthrow of the clerical regime. “Therefore, it is imperative to recognize the right of the people of Iran to resist against and overthrow the mullahs’ regime,” she said.

A Knee-Jerk Response to an Unprecedented Threat

The mullahs have responded to the MEK’s surging popularity by launching a demonization campaign against the Iranian resistance movement. “By demonizing the Mojahedin, the regime seeks to arrange the scene such that everyone would conclude that the clerical regime is better. It is what the Iranian people deserve, and they would be better off to give up resistance,” Ms. Rajavi said.

The regime has established an elaborate terrorist network in Europe. From bases in Albania and Vienna, it orchestrates terror plots against MEK members living in exile in Europe. In 2018 alone, plots were discovered that would have led to terror attacks or assassinations in Albania, France, the US, Belgium, the Netherlands, and Denmark.

Ms. Rajavi concluded, “Therefore, we call on the European Union to impose comprehensive sanctions on the theocratic regime ruling Iran, and to designate the mullahs’ Revolutionary Guard Corps (IRGC) and their Ministry of Intelligence (MOIS) as terrorist entities.”

She called on the EU’s leaders to hold the regime to account and ensure the regime’s leaders face international criminal tribunals for their crimes against the Iranian people.