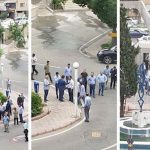 MEK-Iran: Twelve Protests Reported in One Day in Various Cities Across Iran 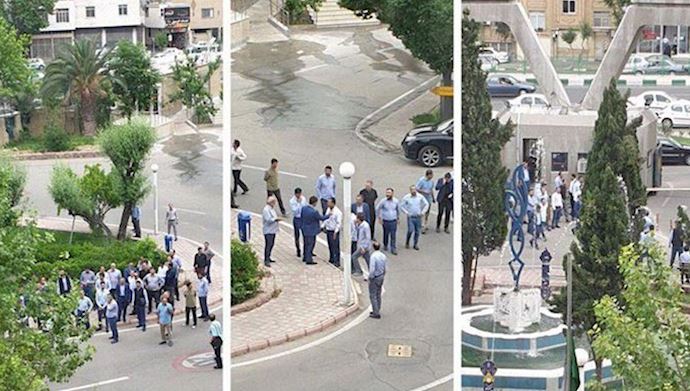 In the capital city of Tehran, metro employees from the Tehran City Rail Company protested their demotions from permanent to contract employees.

Metro Holding Company employees held their own protest over similar changes in their employment status.

Labor union members held a rally in Marzdaran Boulevard in protest of delays in the receipt of purchased property and the unavailability of their financial assets.

Looted clients of the Caspian Credit Firm, which is affiliated with the Islamic Revolutionary Guards Corps (IRGC), held a rally outside of regime President Hassan Rouhani’s offices to demand the return of their stolen savings.

May 21 – Tehran, #Iran
Outside the office of regime President Hassan Rouhani
Clients of the IRGC-linked Caspian credit firm are demanding their stolen savings returned.#IranProtestspic.twitter.com/BziQOYU6Ts

The protesters chanted: “Where is our money?”

“Enough with promises; we have nothing to eat!”

“We trusted you with our money; you betrayed us!”

The IRGC was recently designated as a Foreign Terrorist Organization (FTO) by the United States government.

Retired teachers gathered in front of the Ministry of Education building in Tehran to protest low wages and delayed pensions. The pensioners cited regime corruption and embezzlement as the root cause of their economic distress and complained that their demands have gone unanswered after numerous protests. The MEK reported on their protest on Wednesday.

The pensioners held a banner which read, “The result of 30 years of hard work should be provided for all at once. We will no longer tolerate any more delays.”

They chanted:“We are in solidarity, tired of just promises!”

“Pensions of teachers and educators must be provided for!”

“We will not rest until our pensions are paid!”

“Our wages are in rials, our expenses are in dollars!”.

“One less case of embezzlement will resolve our pension demands!”

Earthquake victims in the village of Sarpol Zahab rallied outside of the mayor’s office to protest water shortages. The village in western Iran was hit by an earthquake in late 2017 and was struck by last month’s deadly floods. Many of the villagers were still living in tents and trailers when the floods hit.

Protesters across Mazandaran Province rallied outside of a local law firm and then marched to the mayor’s office in the town of Nour to protest regime officials’ refusal to extend an agreement to protect the local forest and their firing of forest authorities.

In the city of Karaj, 98 hospital employees and nurses at the Khomeini Hospital held a rally in protest of their delayed wages.

Sanitation workers in Karaj went on strike and held a rally in protest of the recent decision by the local municipality to fire some of their colleagues.

A disenchanted garlic farmer in the village of Iranabad, Ardabil Province, dug up his crops and left them to rot in protest of the falling price of garlic and the lack of assurance that he will be able to sell his crops at all.

This farmer was the second man to dig up his garlic as an act of protest. A farmer in a neighboring village recently protested in the same fashion.

Employees at the Bild Boland oil refinery of Behbahan went on strike in protest of low wages and pensions, poor living conditions, and high inflation.