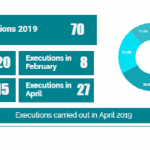 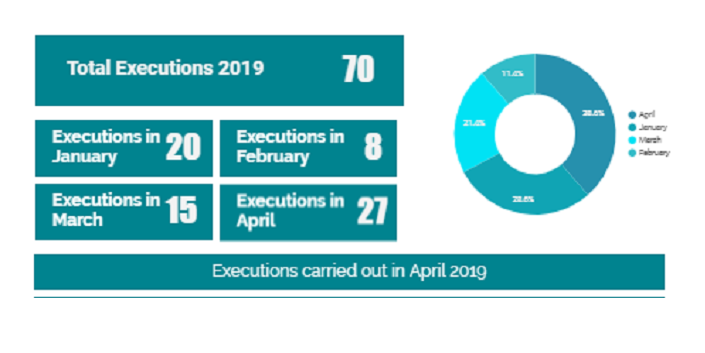 Iran Human Rights Monitor released its monthly report on the regime’s human rights abuses for the month of April 2019. The document makes for grim reading as the regime continues to run roughshod over the rights of Iran’s citizens on a near-daily basis.

The report revealed that in the month of April, the regime carried out arbitrary arrests and killings, tortured prisoners in its custody, violated the rights of ethnic minorities, and carried out several executions.

The Execution of Two Juvenile Offenders

Perhaps the most abhorrent act undertaken by the regime in April was the unlawful execution of two juveniles. Mehdi Sohrabifar and Amin Sedaghat, two 17-year-old cousins, were executed in Shiraz on April 25.

"The Department of State is appalled by the #Iran regime’s secret execution of two 17-year old males, Mehdi Sohrabifar and Amin Sedaghat, in Adelabad prison in Shiraz."https://t.co/hH443oc5Jo pic.twitter.com/39kuE9i2qa

In a statement issued two days after their execution, international human rights group Amnesty International condemned the regime for carrying out an unfair trial and breaking international law prohibiting the execution of prisoners under the age of 18.

In a statement, Philip Luther, Amnesty International’s Middle East and North Africa director, said: “It seems they cruelly kept these two boys in the dark about their death sentences for two years, flogged them in the final moments of their lives, and then carried out their executions in secret.”

Their families were able to visit them shortly before their death but were not informed of their impending execution, robbing them of their goodbyes.

The act also prompted outrage from the UN human rights chief who reminded the regime that the execution of children is banned under international law.

The Global Leader in Juvenile Executions

More than 90 remain on death row in prisons across Iran according to Amnesty International.

April also saw the prominent human rights defender Nader Afshari sentenced to 74 lashes and a year in prison on charges of “disrupting public order” and carrying out “propaganda against the state.”

A further 63 volunteers were arrested after carrying out community rescue operations and providing assistance to victims affected by recent flooding in Khuzestan. Also, 25 internet activists were detained for reporting on the flooding online.

The regime has attempted to stifle any information regarding the full death toll of the flooding out of fear it will inflame public anger. At least 250 people died after heavy rains brought widespread flooding to Khuzestan and the surrounding areas. The regime’s inaction compounded the destruction and loss of life as the mullahs refused to make boats, helicopters, and shelters available for public use in the rescue efforts. MEK sources in Iran reported widely on the damage the floods created, also the Iranian regime’s inaction during and in the aftermath of the floods.

On April 16, the Prosecutor’s Office in Tehran also issued an indictment for the arrest of Amir Salar Davoudi on charges of “cooperating with hostile governments” and “establishing a group to overthrow the system” after he participated in an interview with VOA and partook in a Telegram messaging group sharing information about news and events pertaining to the Iranian judicial system.

Iran Human Rights Monitor also describes the despicable and abhorrent treatment of prisoners in Iranian prisons. It reported the withholding of medical treatment for Alireza Shirmohammad-Ali in Great Tehran Penitentiary. Shirmohammad-Ali was beaten by guards and has been suffering from acute abdominal pain. He has received no treatment for his condition.

#Iran – Imprisoned university student Mojtaba Dadashi has started a hunger strike since April 23, in protest against the denial of urgently needed medical care, including for respiratory tract infection he has been suffering since last week.

In another incident, an inmate was encouraged to assault another inmate by the prison agents. An inmate convicted of drug offenses was promised a case review if she assaulted her fellow inmate, Sima Entesari.

The Fate of Ethnic Minorites