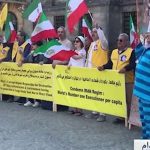 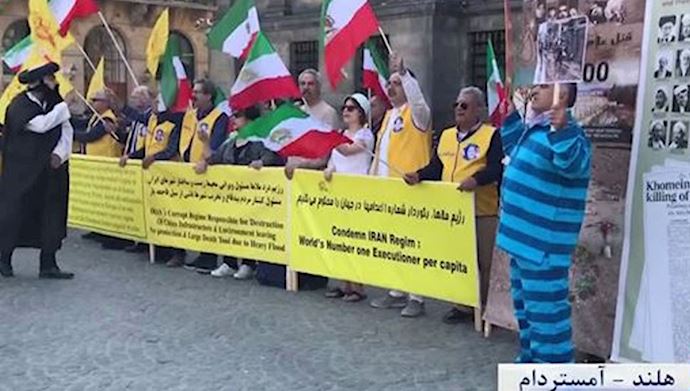 Supporters of the MEK, Iran’s principal opposition, in the Netherlands, Belgium, and Australia held rallies and demonstrations in support of the people of Iran who have been devastated by the catastrophic floods that swept through the country over the past month. The demonstrations took place in response to a call from Mrs. Maryam Rajavi, President-elect of the National Council of Resistance of Iran (NCRI), who asked the Iranian community outside of the country to show their solidarity for the hundreds of thousands of flood victims in Iran who have been abandoned by the regime and to condemn the mullahs for the destructive policies that worsened the severity of the disaster and their failure to provide assistance during and after the flood.

April 27, Aerial image of Aq Qala – Golestan province NE #Iran
Floodwater returning to various neighborhoods.
It is worth noting that regime officials were claiming, "There should be no concern about the future of this city."#IranFloods #سپاه_عامل_سیل @USAdarFarsi pic.twitter.com/wcdjnbT4Gl

At the rally in Amsterdam, demonstrators chanted:

“No to the mullahs’ regime!”

“The plundering mullahs are behind all this destruction!”

“[Regime Supreme Leader] Khamenei and [regime President] Rouhani are behind this destruction!”

“The mullahs’ regime must be overthrown!”

“This regime is a disgrace!”

Demonstrators at the rally in Belgium chanted:
“Khamenei and Rouhani are behind this destruction!”

“The message of every freedom-loving Iranian is that we are ready to overthrow this regime!”

“Dear Iranians in Iran, know the PMOI/MEK are sharing your pain and suffering!”

Demonstrators at the rally in Sydney, Australia chanted:

“The mullahs’ regime should know its days are numbered!”

The demonstrations are the latest manifestation of a growing sense of outrage at the Iranian regime’s response to the historic floods that have devastated the country. Hundreds of people are thought to have died in the floods, thousands lost their homes, and damages are estimated at $2.2 billion. The regime has yet to provide a plan for how to fund the recovery effort, and Khamenei refused requests to withdraw money from the country’s development fund to help pay for the massive project.

During the floods, some people were left stranded on rooftops without food or water for more than a day. Some villages were completely surrounded by water and were left without resources for several days. As flooding continued, people were forced to make their own flood barriers out of bags filled with sand and rice. Regime officials ignored weather warnings and did not order evacuations until the final days of the flood, and then they did not tell residents in affected areas where or how to evacuate.

In the aftermath of the flood, the Islamic Revolutionary Guards Corps (IRGC) has been dispatched to handle flood relief. They have been met with angry protesters in the hardest-hit provinces. The regime has responded to this anger by sending in tanks and military forces to suppress the protests instead of providing assistance. This has only increased anger among residents. The same people who waited for days or weeks for food or tents are seeing the regime’s forces respond within hours at the first sign of dissent.

To my sisters and brothers, and my daughters and sons, I say: Let us build the force of solidarity in these difficult circumstances when we all need one another. Let’s strengthen the bonds of friendship and love in every city and neighborhood. #IranFloods pic.twitter.com/dslnLdFOCn

Those who have attempted to heed Mrs. Rajavi’s call to “rush to the aid” of those affected by the flood have faced arrest by security forces as well. A number of aid workers have been arrested for assisting flood victims outside of official channels.

Meanwhile, the Iranian people are still in dire need of assistance in recovering from the floods.