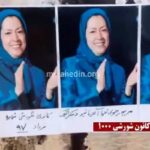 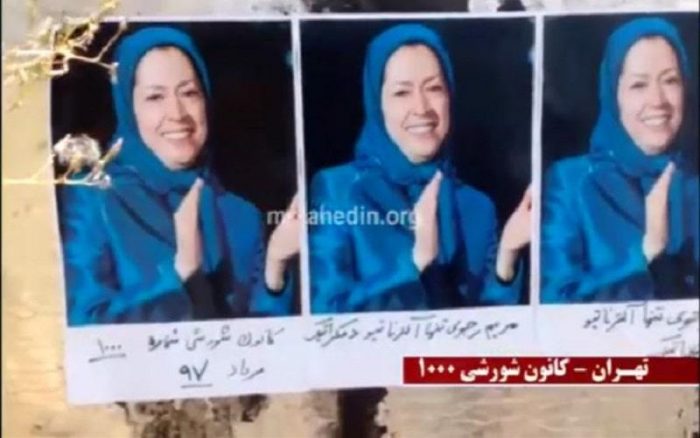 One of MEK resistance units have placed photos of Maryam Rajavi, the leader of the Iranian opposition on a pathway in Tehran. The handwriting underneath the photo reads: Maryam Rajavi is the only democratic alternative (to the ruling regime), signed by resistance unit 1000

On March 10th, members of the MEK’s Resistance Units in Iran launched a widespread campaign in recognition of International Women’s Day on March 8th.

The campaign was aimed at calling attention to the treatment of women under the theocratic Iranian regime and promoting the democratic alternative for the country’s future offered by the MEK and the Iranian Resistance under the leadership of Mrs. Maryam Rajavi.

MEK Resistance Unit members in the city of Urmia, northwest Iran, put up signs featuring quotes from Maryam Rajavi, President-elect of the National Council of Resistance of Iran (NCRI). Mrs. Rajavi is the leader of the Iranian Resistance and has called for gender equality as part of her ten-point plan for the democratic future of Iran.

A female member of a MEK Resistance Unit in Shiraz raised a sign commemorating March 8th.

MEK Resistance Unit members in Hamedan and Karaj posted signs with quotes from Maryam Rajavi. The signs read, ““No to compulsory hijab, no to compulsory religion, no to a compulsory state.”

In the cities of Sanandaj, Isfahan and Shiraz, MEK Resistance Unit members spray painted pro-Iranian Resistance messages on public buildings. Their graffiti read “Iran, Maryam, Maryam, Iran.” They also painted Mrs. Rajavi’s words, “We can and we must overthrow the mullahs’ regime.”

Members of MEK Resistance Unit 987 in Kerman, south-central Iran, posted signs featuring quotes from Maryam Rajavi. The quotes chosen were, “The corrupt mullahs will be overthrown by the Iranian women’s uprising,” and “I have a dream for everyone to be free to choose their own way of life, their own clothing, and women enjoying equal opportunity in all issues, including leadership roles.”

MEK Resistance Unit members in Babol, northern Iran, posted signs that read “It is now the women’s turn to rise against all forms of cruelty.”

New report on Iranian opposition PMOI/MEK "Resistance Units" network inside the country increasing their effort against the mullahs' regime.#Iran#IranRegimeChangehttps://t.co/urw9O4wbIO

In Ilam, western Iran, members of MEK Resistance Units hung Maryam Rajavi posters that called for the overthrow of the regime and the provision of equal rights for women.

In Kermanshah, western Iran, members of an MEK Resistance Unit spray painted graffiti reading, “Hail to Rajavi and the brave female members of the National Liberation Army of Iran.” They also hung a Maryam Rajavi poster at the entrance of an Islamic Revolutionary Guards Corps (IRGC) base.