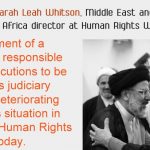 On Tuesday, notorious Death Committee member Ebrahim Raisi was sworn in as the Deputy Chief of the Assembly of Experts. Raisi was elected to the position by the mullahs’ Assembly of Experts a week after being appointed by Supreme Leader Ali Khamenei as the head of the regime’s judiciary.

During the swearing-in ceremony, Raisi vowed to crack down on political dissent.

“We deem security as the most important issue in the country,” he said in remarks broadcast by the Tasnim News Agency.

“We will not tolerate any kind of disturbance in the security of the country and will not concede,” he added.

Raisi’s comments point to a disturbing increase in the regime’s suppression of dissent among its people in the wake of the nationwide anti-government protests that began in late 2017. More than 7,000 people were arrested in January 2018 for their participation in the widespread uprisings in Iran, and a number of people died after being tortured while in custody.

Since then, anti-regime protests and strikes have continued in cities across the country on a daily basis, with demonstrators calling for the overthrow of the theocratic regime. The MEK and its Resistance Units have organized and led the growing Iranian Resistance Movement in its fight for a free and democratic Iran.

Raisi was a member of Khomeini’s ‘Death Committee’ in #Iran, that sent tens of thousands of #politicalprisoners to the gallows for refusing to denounce their political affiliation.@zeyneprkaratas @AmyEAdams77 @FatjonaMejdini#IranRegimeChange #HumanRightshttps://t.co/E9qd9eEGP5

The regime, unable to suppress the protesters, who chant, “Death to Khamenei!” and “Death to Rouhani!” in the streets, have cracked down on all forms of dissent. Last year, the regime’s judiciary threatened striking truck drivers with execution. Security forces conducted a series of midnight raids on the homes of striking factory workers, forcing many terrified workers to sleep on the streets to avoid being beaten and arrested. Several protesters were shot in the street during protests last summer in Kazerun. Numerous activists have been imprisoned for speaking out against the regime.

The Iranian regime has expended a great deal of time and resources attempting to eliminate its primary opposition, the MEK, through terrorist activities and demonization campaigns. Last year, the regime hatched terrorist plots against the MEK in Albania, The Netherlands, France, and the United States. One of the regime’s diplomats is currently standing trial in Belgium for a foiled terrorist attack on the annual Free Iran gathering outside of Paris. Several regime diplomats and Ministry of Intelligence agents have been expelled from European countries for participating in terrorist plots against the MEK in 2018.

And yet still the protests continue. The cries for freedom have not ceased.

Now the Iranian regime has placed Ebrahim Raisi, a man who sentenced thousands of political prisoners to death in a single summer, at the head of the judiciary. The mullahs have further given Raisi, who is closely linked to the Revolutionary Guards, a role in choosing the regime’s next Supreme Leader.

In the summer of 1988, during the final days of the Iran-Iraq War, Supreme Leader Ruhollah Khomeini issued a fatwa against the MEK and its members. He decreed that “as the treacherous Monafeqin [MEK] do not believe in Islam and what they say is out of deception and hypocrisy… it is decreed that those who are in prisons throughout the country and remain steadfast in their support for the Monafeqin [MEK], are waging war on God and are condemned to execution.”

Ebrahim Raisi was a Prosecutor in Tehran in 1988 and was appointed to a Death Committee by Khomeini. He was tasked with conducting trials in a kangaroo court. MEK members were brought in and asked if they renounced their allegiance to the MEK. If they said no, Raisi sentenced them to death and they were marched to the gallows and hanged in groups. Trials lasted less than three minutes.

More than 30,000 people were executed during the summer of 1988, including pregnant women and teenagers. To this day, none of the perpetrators have been brought to justice.

Raisi’s appointment to the Ministry of Justice is an intolerable act, not only to the victims of the 1988 Massacre and their families but also to all of those in Iran who still hope to see justice and fairness in their government.

Many insiders have speculated that Raisi could be chosen as Khamenei’s successor for Supreme Leader. The Iranian Resistance fights every day to ensure that the regime will not last to see that day.