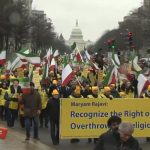 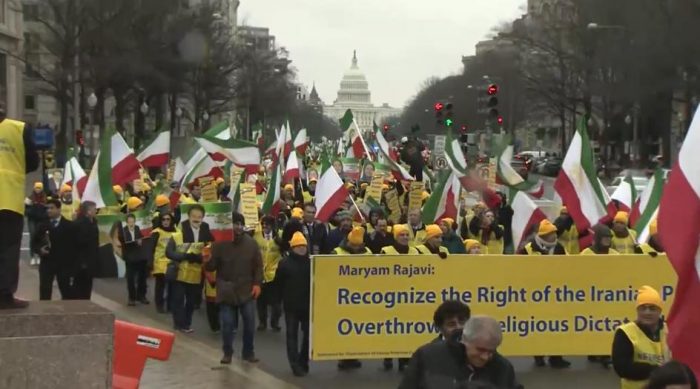 The Iranian-American communities in the U.S. OIAC, March in Washington D.C. in solidarity with Iran Protests, calling for regime change in Iran. The protesters also lend their support to the main democratic opposition led by Maryam Rajavi, the president-elect of the National Council of Resistance of Iran (NCRI).

On Friday, March 8th, thousands of Iranian-Americans held a demonstration in Washington, D.C. in honor of International Women’s Day. The demonstration was organized by the Organization of Iranian American Communities (OIAC) in order to call attention to the Iranian regime’s treatment of women and to ask the United States to recognize the right of the Iranian people to overthrow the oppressive theocratic regime.

1_ Iranian Americans participate in a rally held by the @OrgIAC in support of a #RegimeChange in Iran, in Washington, D.C. on March 8, 2019. We support people's uprising for regime change. #DCIranFreedomMarch #FreeIran @RepEliotEngel @RepMcCaul @SpeakerPelosi @GOPLeader pic.twitter.com/cvhyfEQh0b

Mrs. Rajavi’s speech at the event was focused on inspiring the women of the world to support Iranian women in their fight to overthrow the mullahs’ misogynistic regime.

Distinguished personalities, honorable friends of the Iranian people’s Resistance, freedom-loving Iranians, I salute you all.I salute you for your determination to make Iran free, for your love of #Iran’s captive people, and for your faith in the glorious future of Iran#FreeIran pic.twitter.com/2YJ5GKxTDj

She lauded the young women of Iran who have stepped up to take leadership roles in the MEK’s ever-expanding Resistance Units. She went on to quote MEK leader Massoud Rajavi, saying, “As the Iranian Resistance’s leader Massoud Rajavi has said, the Resistance Units are ‘the tip of the spear and guiding light for the uprisings. They are the critical component in continuing and guaranteeing advancement and victory. The historic destiny of the Iranian people in their battle for liberation will be decided with the resistance units and rebel cities.’”

Rajavi noted that social and economic issues have “grown to catastrophic proportions” under the mullahs’ rule. She described the rampant poverty, water shortages, inflation, unemployment, environmental destruction, and lack of access to health care.

“So long as the clerical regime is in power, none of these ills will be resolved,” she said. “The ruling mullahs will become ever more dependent on their devastating policies, namely the suppression of Iranian society, warmongering and destructive meddling in the region, money laundering, terrorism in Europe and the United States, and plundering the assets of the people of Iran.”

She added, “The velayat-e faqih regime will continue all these policies until the day of its overthrow.”

Iran’s ruling mullahs will become ever more dependent on their devastating policies, namely domestic suppression, warmongering and destructive meddling in the region, money laundering, terrorism in Europe and the U.S., and plundering the assets of the Iranian people.#Iran pic.twitter.com/DirS6o7DDH

Mrs. Rajavi emphasizes that Iran is at a turning point in its history. She said, “The regime now faces one of the most difficult periods of its rule. The continued uprisings have destabilized the ruling structure. And there is no going back. Change in Iran is within reach more than any other time.”

Rajavi went on to speak about the democratic alternative for the future of Iran offered by the NCRI and the MEK. She stressed, “There is a democratic and competent alternative, the National Council of Resistance of Iran. A Resistance deeply rooted in Iran which is capable of overthrowing the regime and managing affairs during the transition so that the Iranian people can choose their true representatives through free and fair elections.”

Pay no heed to the absurd assertions of the mullahs and their international supporters who say that with the overthrow of the #Iran regime, there would be no force capable of controlling the situation.#DCIranFreedomMarch #FreeIran#IranRegimeChange

Finally, Mrs. Rajavi emphasizes the obligation of the United States and the rest of the world to recognize the will of the Iranian people to overthrow their oppressors. “The international community is duty-bound to respect the struggle of the Iranian people to overthrow the clerical regime. This is essential for global peace and security,” she said.

Rajavi added, “It is time for the State Department to designate the Revolutionary Guards (IRGC) and the infamous Ministry of Intelligence as Foreign Terrorist Organizations (FTO). Doing so would be a positive message to the Iranian people, and a decisive message against the clerical regime.”

According to the Washington Times’ coverage of the event, many of the demonstrators who were interviewed were hopeful that Mrs. Rajavi’s ten-point plan for Iran’s future will prove to be successful.

“The fact that this whole event is led by a woman is just really exciting to see,” said a student at the event who was interviewed by the Times. “Gender equality I think is something that every country strives for these days.”