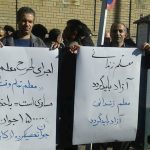 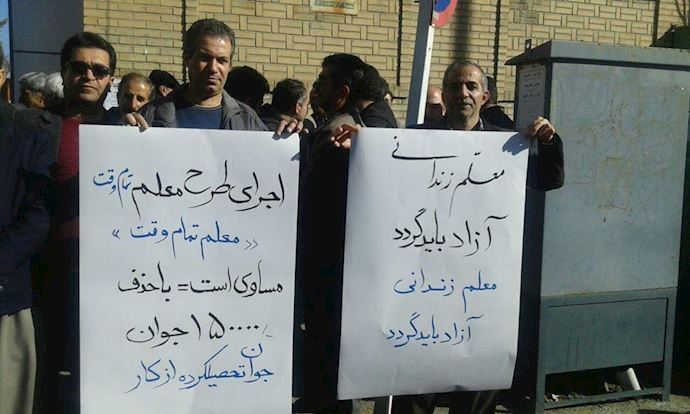 Teachers protest in Sanandaj, West Iran. The sign reads: The arrested teacher must be freed- February 16, 2019

On Thursday, February 14, teachers across a number of Iranian cities took to the streets to protest poor working conditions, low pay, and the clerical regime’s systematic oppression of worker’s rights activists.

Teachers from Ardebil, Kermanshah, Marivan, Mashhad, Urmia, and Sanandaj organized rallies to draw attention to their plight and put pressure on the regime to respond to their demands. One of their most prominent demands is for the instant release of teacher activists from regime custody. Among the placards at the rallies were slogans like “in a country where teachers are behind bars, we can only weep blood.”

In typical fashion, the regime responded to the teacher’s protests with repressive tactics. There were plainclothes regime agents present at the rallies and the regime deployed agents to disperse protests in some cities.

Numerous protests by teachers across #Iran.#IranProtestshttps://t.co/UIRK3irEBH

Teachers are under immense financial pressure. Soaring inflation and the decline in Iranian purchasing power has left teachers earning less than $100 a month, putting teachers below the regime’s own recognized poverty line.

Among the political demands of the teachers is the right for minority students to be educated in their own language. The regime has systematically suppressed minority rights and removed minority languages from the public sphere.

"… as the nationwide uprisings that began in 2017 continue, the people of Iran are developing a spirit of solidarity, and with the help of organized resistance units, they’re inching toward achieving their ultimate demand…"#Iran#IranProtestshttps://t.co/Hmz9P3JAxT

Regime officials should fear the swelling of the teachers’ movement. The country’s educators are articulate, well-organized and enjoy the support of the Iranian people. The events on Thursday clearly demonstrated this.

The nation’s teachers were able to effectively mobilize without warning and draw large numbers of supporters.

In 2018, Iranian teachers were among the demographics that organized extensive protests. On at least three occasions, Iran’s teachers organized rallies and public demonstrations. Each time, the regime responded with force and repression, yet it was unable to break the resolve of the country’s educators.

The protests came just a few weeks after the previous teacher protests which saw teachers organize rallies in Kermanshah, Ardebil, Alborz, and Isfahan. The teachers were protesting the same appalling working conditions and demanded the release of Mohammad Ali Zahmatkesh, a teachers rights activist in Shiraz sentenced to two years in prison for “insulting the Founder of the Islamic Republic.”

Iran’s teachers are among the most ardent opposition to the Iranian regime and their numbers are increasingly participating in the Iranian opposition movement, the People’s Mujahedin Organisation of Iran (MEK). The MEK and Iran’s teachers share a united vision: both want a brighter future filled with more opportunities, increased stability, and more civil freedoms for future Iranian generations.