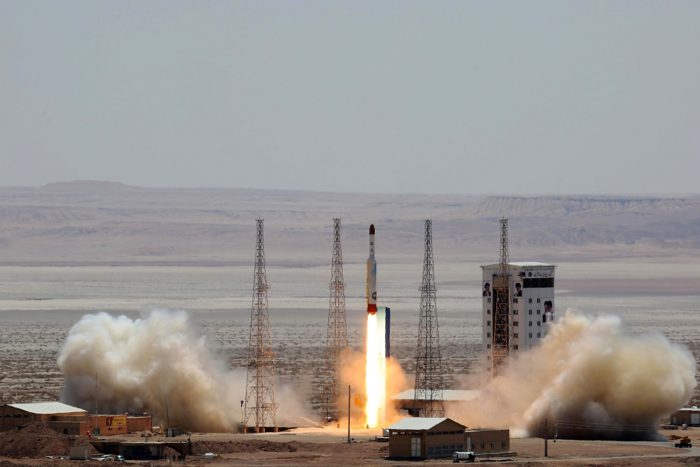 The Iranian regime is using the guise of sending satellites into space to conduct missile tests.

The US Secretary of State Mike Pompeo issued a stern warning and made the United State’s states position very clear. He said in a statement that any such action would violate the UN Security Council’s resolution which demands that the regime not test any ballistic missiles capable of carrying a nuclear warhead. Pompeo told the regime to cease the tests of risk extreme political and economic isolation in the international community.

#Iran Reime's Space Operation Is Merely a Distraction Technique
The Iranian Regime is facing increased political isolation following its recent announcement of further of missiles tests under the guise of launching three satellites into space.https://t.co/Wd1hIpzqUl pic.twitter.com/5Z7zzsVxND

In response, Iranian Foreign Minister Mohammad Javad Zarif denied the “satellite launches” would violate the terms of the UN Security Council’s resolution. These assertions have been the same every time the Iranian regime has tested a missile since 2016.

A Deal Teetering on The Edge

Following the United States’ withdrawal of the Iran nuclear deal, the deal has been circling the drain. The European powers have scrambled to hold it together, but should the regime blatantly violate UNSCR 2231, the remaining signatories in Europe could have a change of heart.

Additionally, the latest round of US sanctions is starting to bite across the Iranian regime’s economy. Should Tehran’s tests sufficiently anger the Trump administration, and they appear set to do so, there would be nothing to prevent the US government from increasing the economic pressure on Tehran in the form of tighter and more comprehensive sanctions. So why would the mullahs risk further angering the international community?

The regime is under intense domestic pressure. It has been unable to contain the growing protest movement in Iran and curb the activities of the People’s Mujahedin Organisation of Iran (MEK).

In a clear effort to distract from the existential threat knocking on the regime’s door, it is using these missile tests as a distraction tool. If the regime can be seen to be asserting strength and testing missiles, it reasons that it may be able to quell the mounting opposition movement through a demonstration of power and repression.

Iranian human right advocate Heshmat Alavi explained, “it is an undeniable fact that Iran’s regime is facing growing isolation, as the international community is coming to understand the clerics’ mortal weakness in the face of mushrooming protests.”

He continued, “having no solutions, the Iranian regime is kicking the can down the road. 2019, with protests showing no signs of cooling and Washington determined to increase economic and diplomatic pressures, is promising to be a devastating period for Tehran.”