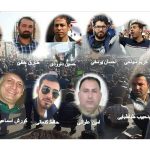 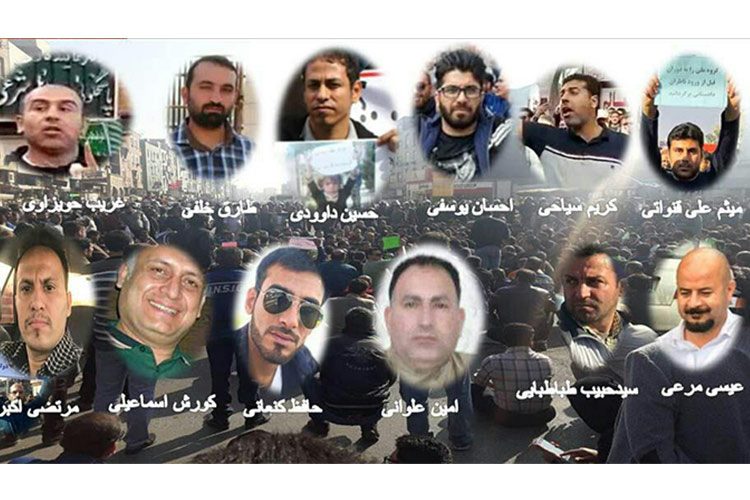 The photos published on the Social Media outlets show the pictures of some of the leading steelworkers’ activists who have been arrested and imprisoned by the regime in order to intimidate the workers and stop their protests.

On Monday, regime security forces conducted the second consecutive night of raids in Ahvaz. 41 workers and representatives of the Iran National Steel Group were arrested in the late night raids on Sunday, and reports from the MEK network inside Iran indicate that more workers were arrested on Monday night.

⚡️ “Continuation of Iran protests despite a heavy crackdown.” by @IranNW
In addition to dozens of Iran National Steel Group workers who were detained on Dec 16, security forces once again raided the homes of a number of other workers and arrested them.https://t.co/0xEpZqBbam

Residents reported that security forces violently attacked their houses in the middle of the night. Many Ahvaz steelworkers have opted to sleep on the streets rather than face arrest at the hands of the regime.

The 41 workers who were arrested on Sunday night have been transferred to Sheiban Prison in Ahvaz, according to Iran Workers Free Union.

The Free Union held a meeting on Tuesday to discuss their plan of action. The union decided not to engage in further negotiations with officials until all of the workers were released from custody.

The Ahvaz steelworkers are on the 40th day of their strike, which has continued despite threats and intimidation from the regime. The Steelworkers say that they will strike until all of their colleagues have been released from prison.

#IranProtests,Dec 17: Angry unpaid steelworkers have just taken over the street in #Ahvaz chanting:
"The Thieves are free and the workers are in prison "
(Video via MEK activists in Iran) #FreeIran2018#HumanRights@ilo @BaerbelKofler @francediplo_EN@ciw @ILRF @USAdarFarsi pic.twitter.com/uCcIzSY7a8

Support for the Ahvaz Steelworkers

The detained steelworkers have gained support from people across Iran. In Tehran, hundreds of pensioners rallied outside of the regime’s Parliament on Tuesday. The protesters expressed their support for the striking workers by chanting: “From Ahvaz to Tehran, workers are in jails!”

And hail to our compatriots who have kept the flames of uprisings alight. The demonstrations of Haft Tappeh Sugarcane workers & the second month of strikes by the brave steel workers of Ahvaz have incited more protests all across the country.#ExpelIranDiplomatTerrorists pic.twitter.com/YeNzOb4i54

“Imprisoned workers must be freed!”

“The enemy is here, they lie to us that it’s America!”

The arrested workers also received words of support from the U.S. Department of State. Robert J. Palladino, the Deputy Spokesperson for the State Department, tweeted in support of the steelworkers on the Department’s Farsi Twitter page. The same tweet was also translated into English and posted on Twitter.

Yesterday, #Iran’s regime arrested steelworkers who simply asked to get paid for their work. Sadly, this is how the regime has always mistreated the Iranian people. The U.S. supports their rightful demands. Iranians deserve to live in peace and dignity. # کارگران #betheirvoice

“Yesterday, Iran’s regime arrested steelworkers who simply asked to get paid for their work. Sadly, this is how the regime has always mistreated the Iranian people. The U.S. supports their rightful demands. Iranians deserve to live in peace and dignity.”

The MEK and the Iranian Resistance call upon the Iranian people, particularly workers, young people, and students, to stand in solidarity with the striking steelworkers of Ahvaz and to protest their unjust arrest. It further calls upon international human rights groups and labor unions to call for the immediate release of the arrested workers

Esmail Bakhshi, the labor representative of the Haft Tappeh Sugarcane Factory who was recently released from custody, has been placed under house arrest.

Ali Nejati, the former head of the Haft Tappeh Union, is still in detention. Nejati suffers from a heart condition. He was violently arrested in a raid on his home on November 29th.

Despite its ratification of the UN’s International Convention on Civil and Political Rights and membership in the International Labor Organization, Iran does not allow its citizens to form labor unions. Citizens can receive harsh prison sentences or flog for organizing labor.