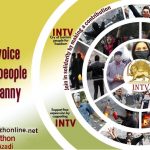 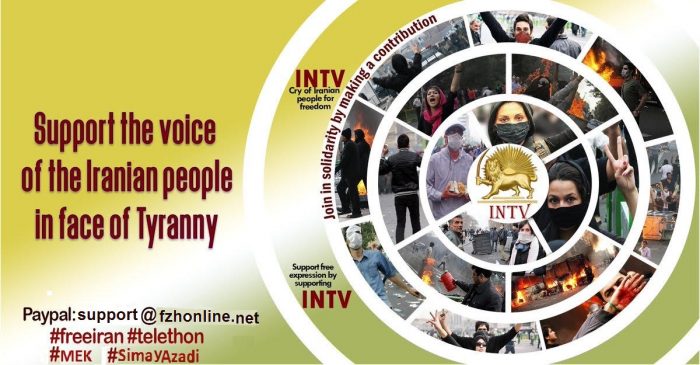 From November 30th until December 2nd, Simaye Azadi, Iran’s National TV (INTV) the satellite TV that is known as the voice of Free Iran is running a telethon to give voice to Iran’s suppressed and silenced population. Much like previous telethons, Simaye Azadi will host the event.

#Telethon #FreeIran for #SimayAzadi (INTV)
Support The Voice Of The #Iranian People In Face Of Tyranny
Paypal: [email protected]et

IranNTV uses its telethons to broadcast the realities of the Iranian regime’s atrocities to the world. MEK and the National Council of Resistance of Iran (NCRI) supporters also take the opportunity to offer donations and messages of support for the main Iranian opposition, the MEK.

MEK’s former Secretary-General, special guest of the 1st day of the Telethon

The special guest of the 1st day of the telethon, was Mrs. Zohreh Akhyani, MEK’s former Secretary General, and one of MEK’s distinguished leaders. In her speech, with regards to Simaye Azadi and its role in distributing information, she said: It’s impossible not to be overwhelmed by its vital role. Today’s telethon is like a “popular
parade of financial support” for the one that is reflecting the voices of the Workers, Haft Tapeh sugar cane workers, and Ahwaz workers, the voice of all truckers and all the people of Iran.”

Ms. Akhyani: Today’s #Telethon is like a “popular
parade of financial support” for #SimayAzadi that is reflecting the voices
of the Workers, #Haft_Tappeh sugar cane workers & #Ahwaz workers,
the voice of all truckers &all the people of #Iran. #MEK #FreeIran pic.twitter.com/y8TiKyS0Ow

For example, an early message read, “I’m Bahareh from Mashhad. I declare my support and help out with a little donation”.

Another, from Mohammad, said “I hope with our aid, this voice will always stay on”.

Past telethons have been a major success

In the past, the amount of donations received has been a strong indication of the MEK’s popularity. In 2013, the group had 22 phone lines set up to receive donations and the generous MEK supporters from within Iran and around the world gave $4.1 million.

Many of these donations were small figures, whatever people could spare, but when added together, they make a huge difference and provide the opposition with the resources to challenge the Iranian regime wherever it can.

Some, like Firoozeh in Mashhad, gave $54. Others, like Shahryar from Karaj, gave more than $200. Many donors give as little as one dollar. But every single one of them goes towards the MEK’s fight for democracy in Iran.

Batool,a donar living in Luxumburgh:
I like to read a message from one of #MEK resistance units (Yasser Hajian)in #Iran: We are those who will make tomorrow” We donate 3000000 tomans for #SimayAzadi, the voice of Freedom. This is our national duty to take part in this #Telethon" pic.twitter.com/Qlq5T3fLyp

Several of the MEK’s high-profile political supporters also participate in the group’s telethons. Political figures from across Europe and the US often make an appearance and urge supporters to keep making donations.

Telethons Keep Hope Alive for the Youth of Iran

It is young Iranians who overwhelmingly turn to telethons to voice their opinions. For Iran’s youth, living in a world where simply voicing anti-regime sentiment could be enough to get you arrested or worse, the telethons offer an outlet and a way to connect with like-minded individuals.

One, named Amineh Gharaei said, “Iran is like a prison for us- Simaye Azadi gives us hope”.

The telethons show the Iranian youth that they are not alone in their disappointment and dissatisfaction towards the regime. They let them know that the MEK is with them.

Gharaei captured the feeling in a panel show on a telethon in 2015. The young Iranian said, “Even though we are far, we are beside you. We feel your pain. Be strong”