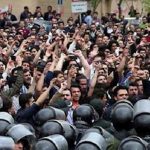 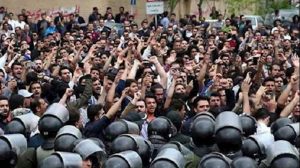 The problems of arbitrary arrests and detention in Iran are serious issues in a time when the people are rising up in protest of the corrupt and brutal regime and its policies.

The Iranian regime can find any excuse to arrest its citizens and uses arrest and detention to maintain an atmosphere of fear in the country. Anyone may be found suspicious under the mullahs’ regime, no matter what their activity or their innocence. The youth of Iran commonly refer to their country as one big prison. In this oppressive environment, there is no room for independent thought. The people are allowed to believe what the government tells them to believe and nothing else, upon pain of imprisonment.

The United Nations held International Youth Day on Sunday, August 12th, to draw attention to issues affecting young people, particularly the need to safe spaces for youth to congregate without fear of violence. The U.N. states that young people should be free “to engage in governance issues,” but in Iran a seven-year-old child was shot in the face with tear gas a week ago by security forces attempting to disperse a protest. The problems in Iran are more complicated than they are in the rest of the world.

The youth of Iran have spent the last four decades standing up to a corrupt and medieval clerical regime. They have protested again and again against the tyrannical dictatorship, despite extreme suppressive measures. They have been betrayed by the so-called moderates and their promises of reform, and they are done. The youth of Iran demand change.

The greatest concern of today’s youth in Iran is the shocking rate of arbitrary detentions. United States Secretary of State and noted Iranian rights activist Mike Pompeo said that 5,000 Iranians were arrested in January after the beginning of nationwide protests across Iran. According to the MEK network inside Iran, some of those arrested remain in prison today. Their families are afraid to share details of their fates for fear of retaliation by the regime.

A statement by Amnesty International indicated that minorities in Iran were being arrested without cause. Amnesty specifically mentioned the case of

On Friday, a soccer match at Tehran’s Azadi Stadium turned into a scene of protest when fans of the Tractor Sazi football club led chants of “Death to the dictator!” during the match. The chants spread throughout the stadium, and security forces, who were already positioned throughout the crowd to prevent such a protest, stacked the protesters. Security forces clashed with the mostly young men, and 43 people were arrested. MEK sources reported that some of the protesters were beaten by security forces during the clashes.

Families in Ahwaz have gathered at Sheyban Prison to determine the fate and location of their children. Numerous young boys and girls were taken to prison, with many dragged from their houses by security forces, according to locals. Some of these youngsters’ only crimes are internet activism. A few have been arrested for simple acts, such as writing poems in Arabic or performing rap songs.

Over the last few months, people in Khuzestan Province have been increasing their protests for water. Many of the protesters have been arrested for the crime of asking the government for clean, accessible water and water to irrigate their crops. Ahwazi Human Rights activist Karim Dahimi said that many of those who have been arrested have no access to lawyers, they end up staying in prison. Some of the prisoners are accused of supporting enemies of the state, such as the U.S.

The Tonekabon Revolutionary Court in Mazandaran Province is now handing down group sentences. One such sentence was recently given to a group of eight prisoners.

Maryam Rajavi, President-elect of the National Council of Resistance of Iran (NCRI), has expressed her support for the recent protests in Iran. “I salute all the women and youth who waged a staunch resistance today against the criminal revolutionary guards, Basij, and plainclothes agents.”

Maryam Rajavi head of the #NCRI, in a statement, said: “I salute all the women and youth who waged a staunch resistance today against the criminal revolutionary guards, Basij, and plainclothes agents."#Iran #Iranprotests #MaryamRajavi pic.twitter.com/ecX3XjYlvq