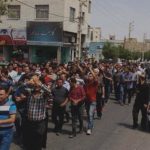 Once Again A Nationwide Uprising Begins in Various Cities in Iran 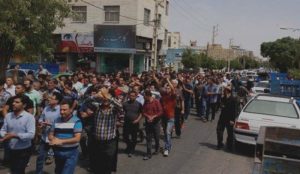 Despite heavy security measure, Iran protests are spreading across the country in all major cities.

In scenes reminiscent of January 2018, on Thursday, August 2nd, the flames of protest once again fanned across Iran. Angry residents of Isfahan, Tehran, Mashhad, Shiraz, Najaf Abad, Arak, Karaj, and Ahvaz rose up as one against the tyrannical regime.

The people’s frustration was channeled into a litany of anti-regime slogans. In Ahvaz, brave protestors filled Naderi intersection and chanted, “our enemy is right here; they are lying that it is America”, and, “the nation is poor, while the mullahs live like a god”.

A full report of Friday's protests across #Iran.#IranProtestshttps://t.co/6L3yqhZ3Kd

In Tehran, the protestors adopted a similar narrative. Those gathered in Vali-e-Asr Square chanted, “death to Khamenei” and, “death to the dictator”. Similar slogans could be heard from the multitude in Najaf Abad, and Shiraz, where the protestors gathered on Daryoush Street.

It has been apparent in this latest wave of protests that the mullahs’ repressive strategies designed to prevent residents mobilizing and protesting are not working. The Islamic Revolutionary Guard Corps (IRGC) and agents of the regime were on full alert following the protests the previous day.

Intelligence officials sent SMS messages to resident’s phones warning them not to partake in any protests the following day. The messages pointed at the People’s Mujahedin Organisation of Iran (MEK) of inciting unrest by using rising prices and a struggling economy to mobilize the population for political ends.

Despite this, and the looming threat of imprisonment and execution, the brave protestors took to the streets anyway. In Tehran, defiant protestors clashed with the security forces and the IRGC. The protestors also set fire to objects and created blockades to stop the movement of the regime’s repressive forces.

In Isfahan, protestors also clashed with the regime’s security forces. The regime’s agents attempted to disperse the crowd with tear gas, firing canisters into the crowd. To counter the tear gas, protestors burnt tires, to create a thick black smoke that would soften the burning effects of the gas.

Weapons were deployed at protests in Mashhad. The regime’s agents shot into the air in an attempt to disperse those gathered. When this didn’t work, they arrested many gathered in attendance.

The regime’s forces deployed violence to bring the situation back under control. In Isfahan, plainclothes officials attacked the protestors, but rather than be dispelled, the people fought back, fighting the regime’s mercenaries with anything that came to hand, including sticks and rocks.

Protestors Will Not Rest Until the Iranian People are Free

As images of the nationwide protests spread across social media, Maryam Rajavi, President-elect of the National Council of Resistance (NCRI) hailed the people’s determination.

Rajavi offered words of encouragement to the protestors, stating, “by defying the criminal Revolutionary Guards, Basijis, and plainclothes agents once again today, the arisen women and youth represent a defiant generation which will not rest until the Iranian people and nation are free.”

Her words look likely to ring true as more cities join the movement. There is no government on earth that more powerful than a united and determined population.