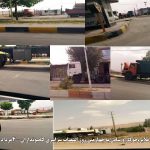 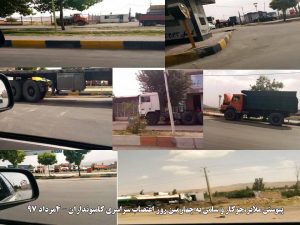 The truck drivers strike continues despite the Iranian government’s intimidation and deception.

A July 29th article on the NCRI website written by Mohammad Sadat Khansari describes the root causes of the Iranian truck drivers’ strike, which is now in its seventh day. The strike that began on July 23rd has spread to 112 cities in 30 provinces and continues to grow daily, based on reports from the MEK Network inside Iran.

The strike is the second round of protests by Iranian truck drivers, who first went on strike on May 22nd, with drivers in seven provinces refusing to carry cargo. The strike, which lasted for eleven days and spread to an additional 274 cities, attracted international attention and garnered the support of major labor unions, including the Teamsters and the International Transport Workers Federation (ITF).

The state-run media has even acknowledged that the regime has been unable to address the drivers’ concerns. A July 22, 2018 article on the Tabnak website titled “Despite Earlier Promises, Truckers’ Concern Are Still in Place” described the problem.

According to the article:

“Two months after truckers staged a strike, their problems are still in place unresolved, with officials being unable to take acceptable and satisfactory steps towards addressing truckers’ concerns; an undeniable fact that proves a great part of earlier promises have been no more than paying mere lip service.”

According to MEK network inside Iran, during the first round of strikes, the regime initially attempted to repress the protests. When those efforts were unsuccessful and it became clear that the nationwide strike could not be suppressed, the regime agreed to make some concessions to the truck drivers. Among the concessions was a 20 percent increase in transportation fees, a decrease in transport companies’ commission rates to 12-14%, and the end of the use of the SEPAHTAN tracking system. These short-term fixes did little to address the larger concerns of the nation’s truck drivers though, and on June 23rd, the drivers went on strike again, saying that the regime had done little to meaningfully address their concerns.

The report says that the truck drivers have asked for an increase in wages, which have not grown in proportion to skyrocketing inflation and cost-of-living in Iran. Truck drivers have also asked for an increase in transportation fees, retirement eligibility after 25 years of service, designation of truck driving as a difficult job, lowered insurance premiums, lowered prices for oil and truck parts (particularly for tires), an increase in the daily quota for gas and oil, and reduced highway tolls and commission fees. Truck drivers want the right to refuse to deliver cargo in harbors and terminals to monopolized state-linked companies, and they also want to stop repressive measures toward truck drivers by the police.

The transport company commissions are one way the regime extorts money from Iran’s truck drivers because these companies are mostly linked to the IRGC. The unfair treatment of the truck drivers is so shameful that even the state-run ILNA news agency had reported it. On transport company commissions on May 27, 2018, ILNA wrote, “The approved commission fees for carrying cargo from inside and outside of terminals are 8 and 10 percent, respectively. Besides, the fee for transporting cement is 6 percent. That’s while some shipment companies ask truck drivers for unfair commissions of up to 40 percent.”

ILNA went on to discuss another way that the regime robs truck drivers. It wrote, “[F]ollowing the country’s subsidy reform plan which led to increased fuel prices, truck drivers’ fuel quota both dropped in volume and experienced a price rise of up to 900 percent as well. Nonetheless, the government didn’t take any steps to reimburse the additional costs despite repeatedly promising to do so.”

ILNA’s report concludes with the revelation that the regime uses its repressive forces to intimidate and threaten truck drivers. According to the report:

“[T]here are numerous entities and organizations that make decisions on road transportation, with law enforcement forces as well as the administration tasked with combating drugs putting truck drivers under a lot of pressure, so much so that truckers are constantly faced with drug trafficking charges. In some cases, trucks are seized for six months only to become clear at the end of inspections that no drug trafficking has taken place, with no one taking the responsibility of reimbursing the driver’s losses during the period.”

These reports that aim to cool off the hatred among truck drivers against the regime, by giving voice to their plights has also been reported by the state-run Mehr news agency in an article on May 30, 2018, titled “How Much Are Earnings and Expenses of a Truck Driver?”  The article quotes a driver as saying, “Freight rates have remained unchanged over the past four years, despite some spare parts’ prices increasing every year and prices of some other consumables like lubricants and oil filters increasing on a monthly basis over the period. Our pay for every shipment is between 1.5 to 2 million tomans and we normally don’t get more than 2-3 shipments a month. Overall, truckers’ average annual income is lower than their expenses and they’re going through difficult times.”

Acknowledging that the typical driver spends 30 to 35 million tomans a year on fuel, tire and oil replacement, repairs, highway tolls and other related costs, the Mehr report added that “the situation is even worse for drivers who don’t own the truck they drive. Moreover, an increasing number of truck owners have decided to sell their trucks over the past few months.”

Tires have become a major issue for the striking drivers, with frustration at a boiling point. The state-run Asr-e-no website, while trying to put the blame away from the regime officials, published an article on May 30th about this issue, in which it quoted a driver as saying, “At the moment, heavy vehicle tires cost around three million tomans a pair. Given that a heavy vehicle needs to have its tires replaced after every 100,000 kilometers, the country’s truck drivers have to replace their trucks’ tires annually as they drive 80,000 to 110,000 kilometers a year on average. This is necessary in order for truck drivers to receive their technical inspection certificates and subsequent bills of laden. As a result, trailers, 10-wheelers, and 6-wheelers have to put aside 27, 15, and 9 million tomans, respectively, only for having their trucks’ tires replaced.”

This is while the import of Tires like many other major products into the country is in the hands of the IRGC, and other repressive and corrupt forces. Based on reports some transport co-operatives are granted a quota for receiving domestically produced or imported truck tires at subsidized prices, yet they refuse to deliver the subsidized tires to drivers. Instead, the tires, especially those delivered to transport co-operatives in small cities, are brought to provincial capitals or big cities to be sold at free market rates. Distributors meanwhile tend to stockpile tires so they can sell them to drivers at much higher prices.

The MEK network inside Iran has captured images of the strike and shared them on social media as the protest continues to spread. Each day, truckers in more cities have joined the stike, leaving Iran full of empty highways and unloaded trucks.

Truckers across #Iran continuing their nationwide strike.
Read a report on the fifth consecutive day.#IranProtestshttps://t.co/zGh7gIEVJx

#IranProtests
July 26#Iran
The cities of Malayer, Jokar and Salman have joined the truckers' fourth consecutive day of this nationwide strike.#IranUpdate pic.twitter.com/6cgza29T5R

The people of Iran continue to voice their dissatisfaction with the corruption and incompetence of the ruling regime as it is expressed in every aspect of life.