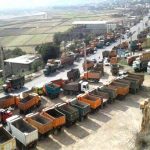 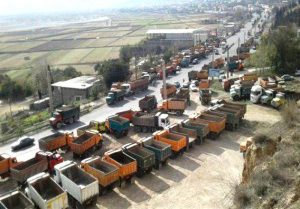 Truck drivers have gone to strike for the second time in the past few months because the government has been not addressed their concerns.

Thursday, July 26th, marked the fourth consecutive day of protests by Iran’s truck drivers. The latest round of strikes by truck drivers is currently taking place in at least 85 cities in 25 provinces across Iran.

The truck drivers held an earlier strike in late May, which lasted for eleven days. The drivers have been forced to strike again because the government has been unwilling or unable to address their concerns.

The new round of strikes is in protest of unchanged transportation fees and increased costs. The drivers cite an increase in the price of truck tires and parts as major concerns and are asking for subsidies for the price of tires for their trucks.

#IranProtests
July 26#Iran
The cities of Malayer, Jokar and Salman have joined the truckers' fourth consecutive day of this nationwide strike.#IranUpdate pic.twitter.com/6cgza29T5R

In an interview with the state-run ILNA news agency on Wednesday, July 25, Ahmad Karimi, the chairman of the Iran Truck Drivers Association, said that the regime’s Industry Ministry has not fulfilled its obligations to Iran’s truck drivers. He said that “most dissatisfactions are due to the Ministry of Industry, Mining and Trade’s performance, as the ministry has failed to fulfill its commitments.”

The truck drivers say that an insufficient supply of tires has led to a black market. According to the drivers, there is not enough subsidized foreign currency to import tires, nor is there sufficient means to distribute them.

ILNA news agency reported on Tuesday that truck drivers in a number of terminals stopped work in protest and refused to load their trucks. Truck drivers parked their trucks on roadsides and asked their co-workers to join their strike. The report was taken off of the website shortly after it was posted.

Also on Tuesday, the Iranian Workers Free Trade Union reported on its Telegram channel that truck drivers in Farokhshahr, Chaharmahal, Bakhtiari, Marand, Qazvin, and Isfahan stopped loading their trucks. Officials handed out subsidized truck tires in Mashhad’s terminal at the same time, in an attempt to appease the drivers and break the strike.

The Iranian regime has taken a number of measures to break the strike over the past four days. The regime’s authorities sold cheap tires in the terminal in Mashhad, but no drivers showed up for loading.

In Sarbandar, Khuzestan province, regime officials used Ministry of Transportation trucks to confront the striking drivers. The regime used government trucks to do the same in Shahrekord.

In Kermanshah, intelligence agents and the police attempted to remove license plates from striking drivers’ trucks, but the truck drivers’ families protested the move.

The head of the regime’s transportation union, Mohammad Khanbalooki, tried to claim that more than 70 percent of truck drivers’ demands had been met and their major problems had been resolved, even as the drivers continued to strike. He claimed that the MEK was responsible for the continuance of the strike and that the MEK had infiltrated the drivers.

The regime’s attempts to break the strike have been unsuccessful, and they have yet to address the drivers’ demands. The MEK salutes the striking truck drivers and encourages trade unions and labor unions in other countries to support them in their goals.