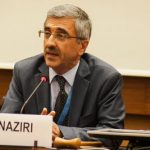 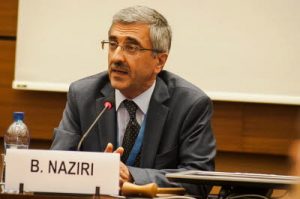 Behzad Naziri, member of the Foreign affairs committee of the NCRI speaking at a conference.

Behzad Naziri, a member of the Foreign Affairs Committee of the National Council of Resistance of Iran (NCRI) describes the roots of the recent mass protests in Iran.

Writing for the National Council of Resistance of Iran (NCRI), Behzad Naziri in his piece entitled “Mass Protests Stemming from Fury” referred to the analysis of the Iranian regime’s 40-year history and mass mobilizations against the regime to ascertain the causes behind public demonstrations.

Behzad Naziri argued that there were several factors which created an environment for mass public mobilisation. He cited economic injustice, widespread unemployment, the regime’s inability to meet the needs of the lower classes, rising economic inequality between the mullahs and the public, the corruption pandemic, ethnic discrimination, and violence against women. The combination of these factors instils an atmosphere of fury and anger throughout the Iranian population.

However, although these factors contribute to the mobilization of the Iranian population, they cannot explain why the protests have intensified in recent months. The population has been oppressed and silenced by the regime since its seizure of power in 1979. Yet only now is the regime losing its grip on power.

Renewed Calls for Truth and Justice

Naziri offers an explanation. He said the most recent wave of crackdowns and protests comes amid renewed calls for an inquiry into the killings of political prisoners in the summer of 1988.

Mass grave sites were uncovered in Khavaran, in southeastern Tehran. The regime buried the bodies of 30,000 political prisoners mainly the People’s Mujahedin Organisation of Iran MEK activists in 120-190 mass grave sites in the summer of 1988. The perpetrators of the atrocities have never been brought to justice despite calls from the MEK, and many international human rights organizations.

The regime has tried to cover up many aspects of the executions. They have not revealed the identities of MEK members executed in the 80s. They also tried to hide the burial sites in Beheshte Reza, Mashhad.

Many of those involved in political and economic protests against the regime are human rights defenders seeking truth and information about one of the bloodiest episodes in Iran’s history. Conversations on social media have brought the regime’s atrocities to the surface, and memorial gatherings have been held in Khavaran.

Naziri argues the protests and rebellions stems from a place of anger and exasperation over a lack of answers and human rights abuses. He predicts that they will only intensify and become “more severe and irreversible by the day”.

He ends his article by describing the protestors. He said the protestors symbolize “the sacrifice and blood of many men and women who 30 years ago, promised the freedom of the oppressed Iranians from the tyranny of the bloodthirsty regime of Mullahs”.