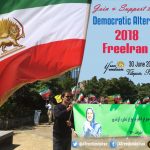 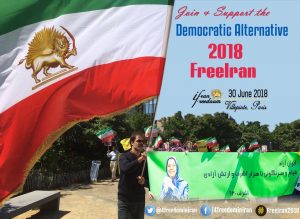 A young man raise the flag of Iran’s opposition, during a rally in Brussels protesting Iranian regime’s Foreign Minister visit to Brussel.

On June 10th, the Kansas City Star published a commentary piece by Saeid Sajadi. The article, entitled “Real hope for democracy in Iran, but the U.S should help”, called on the Trump administration of offer a message of support to annual gathering of the Iranians in Paris, the Free Iran-2018.

Saeid Sajadi began by exploring the effect regime change in Iran would have on the wider Middle East. He called the Iranian regime, “the most destructive force affecting the stability, safety and security in the region and beyond”.

Regime Change is Within the People’s Grasp

The uprisings which took place at the tail end of 2017 “shook the foundation of the regime”, Sajadi said. Rather than isolated demographic groups protesting their individual grievances, the uprisings united people from all walks of Iranian society. The poor stood shoulder-to-shoulder with the urban middle class and wealthy merchants.

This was a landmark moment for the regime. It had long relied on the unfettered support of the nation’s lower classes. Slogans like “death to the dictator”, and “the game is now over”, will have shaken the mullahs’ confidence.

The rapid spread of civil unrest, which reached 140 cities over the span of a few days, shows two things, according to Sajadi. Firstly, it demonstrates the extent that Iranian society has been harbouring a desire for regime change. The eagerness with which people took to the streets, risking both their lives and freedom, indicates that many held deep-rooted mistrust towards the regime.

The Effectiveness of the MEK

The second is the strength of the MEK’s networks. Sajadi said the scale of the revolts indicates how “deeply the hidden and effective network of the main Iranian opposition force- PMOI, or the People’s Mujahedin Organisation of Iran [MEK]- is rooted throughout Iran”.

What is incredible, is that the group has survived a perpetual attack on its existence by the Iranian government. Sajadi cites the massacre of 1988 when the government executed 30,000 MEK members in a single summer. Yet the group is not only still active but thriving and threatening the mullahs’ grip on power.

As President-elect of the NCRI, Maryam Rajavi, predicted, 2018 has so far been a “year of uprising”. Nationwide-strikes have crippled the logistics sector. Other sectors like education, metalworks, taxi drivers, shop owners, and students have also organised protests and strikes against the regime.

The role of the US

Unable to avoid the will of the Iranian people, the US is beginning to change its stance towards the clerical regime in Iran. On May 21st, Secretary of State, Mike Pompeo, outlined 12 areas in which the regime needed to adjust its behaviour. The demands were explicitly designed to minimise Iran’s influence as a disrupting force in the Middle East.

These demands, although intended to limit Iranian power and influence, also provide support to the Iranian public. However, Sajadi argues the US should go further. With Iranians risking their lives in Iran to show the world that they want regime change, the U.S. has the opportunity to support real change in Iran. Lending its support to the Iranian people, in concrete terms, is in the interests of American people, Sajadi says.

He even provides an opportunity for the US to do so. On the 30th of June, there will be an international gathering of NCRI supporters in Paris. Many Iranians living in exile, and Iranian-Americans are set to attend. Sajadi calls on President Trump to offer a message of support at this, or another event organised by the Iranian opposition, to provide solidarity to the Iranian people on their quest for regime change.