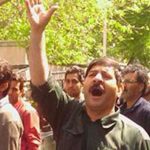 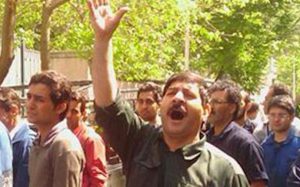 On Tuesday, June 12th, hundreds of steelworkers gathered outside of the governor’s office in Khuzestan Province to demand the release of the 36 workers who were detained on Monday night. The steelworkers chanted, Detained workers must be freed!”

Sources in the MEK network inside Iran reported that at least ten more workers were arrested on Tuesday when suppressive forces attacked the protesters calling for the release of detainees of the initial protests.

The protests began on Sunday when authorities refused to pay workers’ delayed salaries and meet their outstanding demands. The workers responded by raising roadblocks on the Ahwaz-Tehran rail tracks.

On Monday morning, 400 workers from the Iran National Steel Industrial Group gathered in front of the Governorate in Ahvaz to ask for consideration of their status in their company and to demand payment of their salaries, which have not been paid on time.

The protesters marched from the Governorate to Kianpars and then on to Mahin Street while surrounded by a heavy police presence. The marchers shut down the street, bringing traffic to a standstill for several hours. The workers then marched to the offices of some members of parliament in the city, chanting:

“Compatriots be aware, Ahvaz has no owner!” and “We do not want an inadequate governor!”

Sources in the MEK network inside Iran also reported that the steelworkers chanted against the mullahs’ regime during their protest.

Iran Human Rights Monitor was able to obtain the names of some of those who were detained in their initial protests. Their names are listed below: