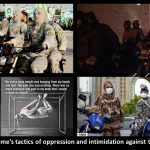 MEK Iran: The regime’s tactics of oppression and intimidation against the Iranian people.

Written by Esmail Mohades on October 3, 2020. Posted in NEWS 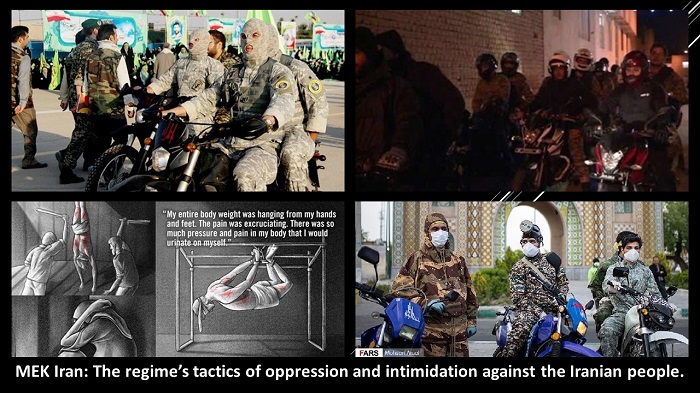 In a state of fear over the growing support of the resistance movement in Iran, the (PMOI / MEK Iran) and the  (NCRI), the mullahs are resorting to intimidation tactics to deter the people of Iran, particularly the youth, from the uprising.

The regime is currently doing all that it can to cling to control amid the ongoing uprising of the Iranian people, demanding regime change. The first uprising began in December 2017 and the second in November 2019, with protests continuing to the present day.

#Iranians are mocking the regime's security forces (IRGC and Bassij) saying that ppl should call for #IranProtests every week, forcing the regime to go on high alert and parade on the streets, until their budget runs out. pic.twitter.com/aneyxp0g53

The coronavirus pandemic has devasted Iran, as the regime has used the virus as a tool to try and oppress the Iranian people and create a distraction from their protests. They have intentionally reopened schools and businesses without the necessary safety measures in place. This has caused a death toll in Iran that is currently according to the latest report from the People’s Mojahedin Organization of Iran (PMOI / MEK Iran), which is over 114,300.

President-elect of three National Council of Resistance of Iran (NCRI) Mrs. Maryam Rajavi expressed her sympathy to the…

In a state of fear over the growing support of the resistance movement in Iran, The People’s Mujahedin of Iran (PMOI / MEK Iran) and the National Council of Resistance of Iran (NCRI), the mullahs are resorting to intimidation tactics to deter the people of Iran, particularly the youth, from the uprising.

IRGC form hit squads in every neighborhood of Tehran

The Islamic Revolutionary Guards Corps (IRGC), an agency of the regime, announced on the 14 September the formation of “hit squads” and “Bassij local patrols” that will be stationed in every neighborhood of Tehran to ensure their security.

The patrols were described by the IRGC commanders as being formed to confront “mischievousness of American elements and insecurity in cities.”, as well as “thugs, thieves, and pickpockets.”

However, the patrol squads are gathering in areas that have been the most known for protests over the past couple of years. This is a clear tactic to stamp out any protests in these neighborhoods in the hope that they don’t spread to wider areas.

Public displays of humiliation for the protesting youth

In September the regime attempted to make a display of young protesters and supporters of the resistance, MEK, and NCRI, by publicly humiliating them through parading them in the streets of Tehran. This is an effort to deter other young people from joining in anti-regime efforts.

Several hated Basij bases in Iran have been targeted by young supporters of the #MEK #Iran in the last few days. The Basij is a component of Iran the IRGC, attacking any sort of anti-regime protest on the street so #Iranian cities. https://t.co/iobkpZdKhe pic.twitter.com/3VNrJnNiNB

Violating the right to life

The regime has committed a clear violation of the right to life by carrying out 21 executions in the month of September. This included Navid Afkari, an Iranian wrestling champion turned protestor, which caused an international outcry. Further to this, two women, a juvenile offender, and a man whose verdict had not been upheld for 29 years, Mo’in Salavarzi Zadeh, aged 55.

Zadeh’s son said: “My father has been condemned to death after 30 years…We are under the poverty line. We did not afford to hire a lawyer. This verdict is very unfair, oppressive, and utterly unjust.”

Brutal torture has also been used on political prisoners in order to create an atmosphere of fear in Iran. One particular instance of this includes four men who were ordered to have four fingers on their right hands’ amputated. Hadi Rostami, Mehdi Sharfian, Mehdi Shahivand, and Kasra Karami, were forced to confess to their crimes under torture and have had their sentences upheld by Iran’s Supreme Court. The sentences could be carried out at any given time. This case of injustice was so bad that Rostami protested the upholding of his sentence by cutting his wrists in June.

Violating the freedom of religion and belief

The ongoing persecution of religious minorities in Iran has been extremely prevalent during September. At least six Christian converts were summoned or sentenced to imprisonment and exile and there were also at least three cases of Sunni citizens and clerics being targeted for arrest and interrogation.

In order to assert control over the Iranian people, the regime has ordered forced evacuations of residents from their hometowns, such as in six villages near the city of Sardasht, Kurdistan province. They have also carried out attacks on groups of citizens, assaulting them and even opening fire, such as in Bahmaei district, Southwest Iran.

Maryam Rajavi President-elect of the National Council of Resistance of Iran (NCRI):

Today, not only the freedom of the people of Iran but their very lives and health, and the country’s economy and existence depends on the overthrow of the clerical regime. Likewise, global and regional peace and security and confronting natural disasters depend on regime change in Iran.