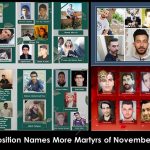 Written by Amineh Qaraee on September 19, 2020. Posted in NEWS 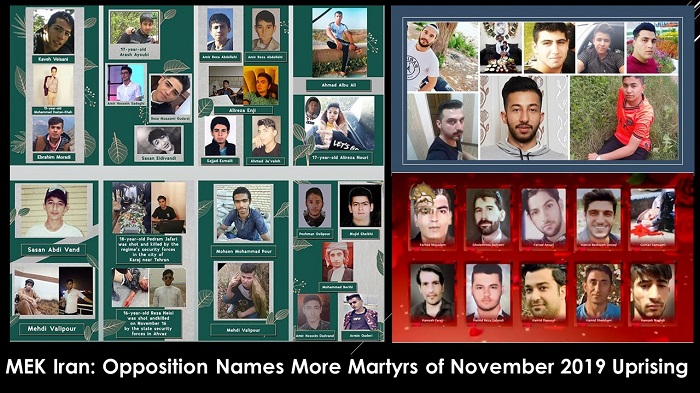 In November last year, major protests broke out in Iran after the regime announced that fuel prices would be massively increased. The protests turned into a major uprising and the regime responded with extreme brutality.

The People’s Mojahedin Organization of Iran (PMOI/MEK Iran) recorded accurate numbers of deaths gathered from sources on the ground and they reported over 1,500 people killed by security forces, and they have identified nearly 1000 so far. Many more thousands were badly hurt. The regime shot unarmed protesters at point-blank range, sometimes in the back.

It is clear that the regime thought this uprising could have been the one that brought it to collapse.

The People’s Mojahedin Organization of Iran (PMOI / MEK Iran) has managed to release the names of hundreds of martyrs. Once again, the (PMOI / MEK Iran) has proven itself to be instrumental in supporting the people of Iran and informing them, and the rest of the world, about what is happening inside Iran. The regime, we know, cannot be trusted to tell the truth.

Take for example the Coronavirus health crisis that the country is currently battling with. The (PMOI / MEK Iran) knew that it would have to keep tabs on the situation because the regime will lie and deceive the people. And this has been the case. After the (PMOI / MEK Iran) reported that more than 104,500 people had lost their lives in Iran after contracting the virus, the regime’s death toll was around the 24,000 marks.

Covid-19 Storm Hitting Iran: According to the report from The People’s Mojahedin Organization of Iran (#PMOI / #MEK Iran), COVID-19 has already killed 104,500 people in #Iran. However, the regime’s death toll stands at just 23,808. pic.twitter.com/SBr4b3eDGI

The Iranian regime could not be truthful about the number of people that were killed during the uprising last year. It is clear that it hoped not to draw attention to the extremely high number of fatalities, but did it really think that it could cover it up? Or that it would be forgotten about?

As it always does during crises, whether this is unemployment figures or such like issues, the regime downplays statistics. A few months ago, the Minister of the Interior Abdolreza Rahmani Fazli said that 200 people were killed during the uprising.

International attention has been brought to the regime’s treatment of protesters and Amnesty International recently published a report entitled “Trampling Humanity: Mass arrests, disappearances, and torture since Iran’s November 2019 protests”. The organization concluded that the Iranian regime has “waged a campaign of mass repression” against the people of Iran.

The (#PMOI #MEK #Iran), martyrs who walked to the gallows by the thousands to uphold the cause of freedom is today the topic of debate in #Iranian society. A.I. new report “Trampling Humanity”, has shocked the world.https://t.co/tUix4YXZ2X pic.twitter.com/zg8TkSrh79

As the Iranian Resistance and Amnesty International and other human rights organizations have established, the regime arrests protesters and denies them the right to fair trials. Amnesty International even said that many of the arrests following the November protests last year were “arbitrary” and that “the succession of atrocities in Iran is intractably linked to the impunity that has been ingrained into the country’s institutional system”.

This is why the international community needs to take urgent action. Four decades of impunity have emboldened the regime and it is essentially a green light for it to go ahead and continue trampling on the human rights of the people of Iran.

The UN Human Rights Council and the relevant bodies should immediately respond to the regime’s abuses of human rights.

Amnesty International published a shocking report last week, about Iran, entitled, “Trampling Humanity.”The report indicates that the regime has failed to put out the flames of resistance despite massive crackdown and killing of at least 1,500 protesters in November 2019.

Amnesty International published a shocking report last week, about #Iran, entitled,“Trampling Humanity.”The report indicates that the regime has failed to put out the flames of resistance despite massive crackdown and killing of at least 1,500 protesters in November #IranProtests