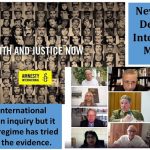 New Inquiry Demanded Into the 1988 Massacre 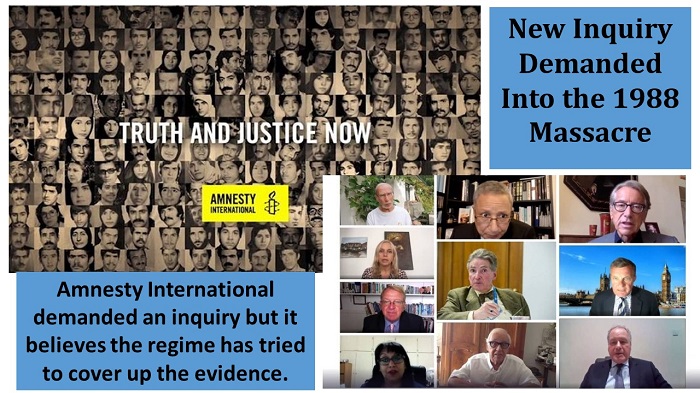 The (PMOI / MEK Iran) said they had been pushing for justice for the victims and families of the 1988 massacres but their requests for an investigation have so far fallen on deaf ears.

A virtual conference took place last Saturday, held by the National Council of Resistance of Iran (NCRI), calling for an inquiry into massacres of political activists that took place in 1988.

The National Council of Resistance of Iran and MEK in the virtual conference referred to the massacres as one of the “worst crimes of the Islamic Republic” and also, against humanity. The opposition movement said they had been pushing for justice for the victims and families of the 1988 massacres but their requests for an investigation have so far fallen on deaf ears.

Three of my brothers, Behrooz, Bahman and Reza, were executed by the regime.#1988Massacre#NoImpunity4Mullahshttps://t.co/Jc9Tf64nV4

Dominique Attias, one of the invited speakers at the online event and the former deputy head of chair of the Lawyers Guild in Paris, was disheartened by the lack of international response. He said, “So many people, so many young people, men, and women, were executed and murdered,” …… “Thirty thousand people were murdered in 1988 and there is complete silence… total silence, while families need to know and recuperate the bodies, and the dead need to be buried and honored. These are crimes against humanity. It is inconceivable to ignore them.”

He also went on to remind the participants that many of those massacred ended up in unmarked graves so they could not be identified. Some were eventually found while others were concealed, albeit deliberately by massive building projects.

The whole event and all the effort put in by the NCRI and, the People’s Mojahedin Organization of Iran (PMOI / MEK Iran) was mainly to try and convince the United Nations to open a commission of inquiry into these killings. Amnesty International has also demanded an inquiry but it believes the regime has tried to cover up the evidence.

Despite the regime orchestrating a cover-up there are still witnesses alive who are prepared to testify against the perpetrators. Many of their statements have already been recorded by the MEK and in particular the victims’ families and those who survived and escaped the atrocities.  Many of these survivors shared their memories and experiences at Saturday’s online conference.

An Iranian expatriate explained how his aunt had been imprisoned for 7 years. At the age of 32, she was supposed to be released but unfortunately, when her relatives went to collect her they were handed a bag of her clothes and were told she had been executed.

The time has come for referring the dossier of #HumanRights violations in #Iran, particularly the executions of the 1980s and the #1988Massacre, to the UN Security Council. #NoImpunity4Mullahs pic.twitter.com/Z2ucgUo1Fp

Another eyewitness explained, “Only a handful of prisoners survived the 1988 massacre. Most of the truth of that crime is still hidden behind the curtain, especially in provinces other than Tehran.”

Several members of the then “death commissions” who were responsible for passing sentences on the victims of the 1988 massacre now hold key positions in the Iranian regime. These are the present head of the judiciary, Ebrahim Raisi, and both the current and former Iranian Ministers of Justice who are Alireza Avaie and Mostafa Pour Mohammadi, who is still a high-level advisor to the president. He said he defended the 1988 massacre and later on in 2016 said he was “proud” to have helped carry out “God’s command” of death to the MEK.

1988 was not the only year of crackdowns as it happened in November 2019 where approximately 1,500 peaceful protesters were killed indiscriminately in the streets.

Former Italian Minister of Foreign Affairs Giulio Terzi remarked at Saturday’s webinar by saying that “The International Community in its entirety knew and knows” about the massacre, and “The United Nations, the UN Security Council, the General Assembly, the UN Human Right Council, they all knew.”

He said he will join with members and supporters of the MEK and NCRI to convince the United Nations ‘’to open a commission of inquiry, with the ultimate goal of filing charges in the International Criminal Court against members of Iran’s death commissions.’’Doing this may save innocent Iranians from being treated the same way.

Mrs. Maryam Rajavi the President-elect of the National Council of Resistance of Iran’s (NCRI): The time has come for referring the dossier of HumanRights violations in Iran, particularly the executions of the 1980s and the 1988Massacre, to the UN Security Council.