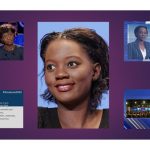 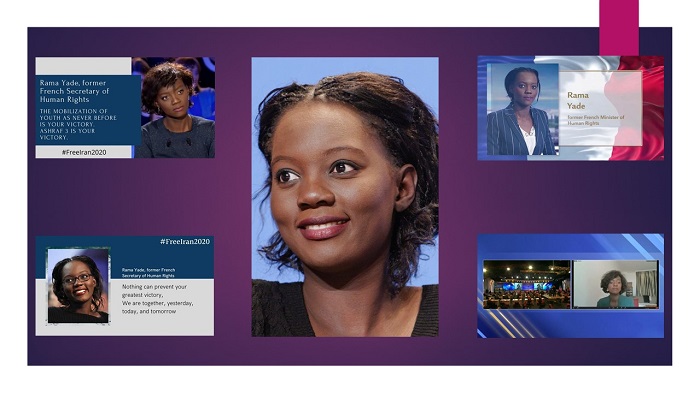 20th June 2020 International online conference: 40 years of fighting. For democracy. For freedom. For equality. Your sacrifice has been great. It’s touching me. It’s talking to me. It is not just for Iran that you have made this sacrifice.

It’s for humanity. Your emotion, your will, your sense of sacrifice: you don’t have to be Iranian to feel them. The humanity we share is enough. Through its duration, its mobilizing force, the Iranian resistance is in line with the great mobilizations that make history.

Rama Yade, former French Secretary of Human Rights- Online Conference for Freedom and Democracy: “The mobilization of youth as never before is your victory. Ashraf 3 is your victory. Nothing can prevent your greatest victory,” #FreeIran2020 https://t.co/qjqngZqXxG pic.twitter.com/ys9WzNZj2U

At a time of great mass mobilizations: the Hong Kong democratic movement, the climate protests, the Algerian Hirak, the hunger riots in Lebanon, the upsetting International Black Lives Matters Movement, history will remember that the Iranian Resistance is one of the great struggles that are changing the world.  By changing Iran, it is the march of the world that you will change. But do you know what upsets me the most: your victory will be ours. But your sacrifices are yours.

Let us be clear: these are not sufferings that belong to the past. But there’s present suffering.

First, it is today and every day that the members of the (PMOI / MEK Iran) face terror.

The December 2017 uprising that saw protesters repeat the slogans of the (PMOI / MEK Iran) for 40 years for the overthrow of the mullah’s regime: you paid for it.

#Iran @ramayade on the #Iranian #women’s leadership role in the resistance movement: “Forty years of fighting for democracy, for freedom, for equality… Your sacrifice has been great https://t.co/YfoKcQROTK#FreeIran2020 pic.twitter.com/Bib71mfKHM

The 2020 revolt, after a Ukrainian plane was shot down by a missile or rather by the regime’s incompetence, 176 innocent passengers paid with their lives.

At MEK, you paid for each of these uprisings. Let us remember and pronounce this time the names of Ali Younesi and Amirhossein Moradi, two students recently arrested for their alleged links to the MEK. So many others followed.

As for the sufferings of yesterday, they endure through the painful faces of bereaved mothers, the determined faces of the grandchildren scattered throughout the world, who are raised in the memory of martyrs. The 120,000 victims since 1979 and many related to the MEK. And how many are imprisoned, tortured, disappeared, executed like the 30,000 political prisoners massacred in the summer of 1988.

Since then, the (PMOI / MEK Iran) has been relentlessly engaged in the long march of a campaign for peace.

You have to walk the aisles of the Ashraf 3 exhibition and see the grave faces of the founders of Iran. Cross the eyes of Massoud Radjavi. To be dizzy in front of the portraits of hundreds of young people, women, artists, sportsmen murdered by the regime. Be upset at photos of dozens of mass graves.

It all started 40 years ago. June 20, 1981. This regime is first and foremost the story of betrayal. That of a people who had believed that by overthrowing the Shah, he would gain freedom: the betrayal began with the murder of 70 MEK supporters. On that day, June 20, 1981, the Resistance rose, and since then has been moving forward, braving threats and fatwas, intimidation and misinformation on the part of the regime, but also our cowardices, the latest of which was the nuclear agreement, which has come to nothing.

Former Human Rights Minister of France @ramayade tells MEK members in Albania in today's online conference: “The mobilization of Iran's youth as never before is your victory. Ashraf 3 is your victory. Nothing can prevent your greatest victory” of bringing about #FreeIran2020. pic.twitter.com/PBWn9J9Dfw

These huge, powerful obstacles have only strengthened the MEK.

What the regime fears are that in 50 years, the multigenerational and multi-ethnic aspect of an organization that has brought together the best of Iran!

What the regime fears are the MEK’s ability to reconcile Muslim faith with the separation of Islam and the state while fiercely combating religious extremism.

And I like to quote at our gatherings this phrase from anthropologist Margaret Mead:

“Never doubt that a small group of conscious and committed individuals can change the world. That’s how it’s always happened.”

For, throughout this journey of sacrifice, not everything was dark. There are also victories. And how beautiful they are!

The consecration of women is your victory. (PMOI / MEK Iran) puts women at the heart of its work because it knows what women have brought to Iran. And that Iran would not be this great civilization without women. Actresses of change, martyrs of the cause, they hold the strongholds of protest for months, paying for their freedom or their lives.  And it is women, wives, sisters, mothers who are at the head of all challenges, clever to the point of sacrifice.

The awakening of youth, mobilized as never before, is also your victory.

Ashraf, place of memory and reconstruction,  is also your victory.

Above all, the hope, this light that I see in your eyes and that nothing can turn off, is, without doubt, your greatest victory.

No doubt such perseverance will one day pay off. The men and women I have seen since we have known each other give themselves every day because they know that they belong to Iran, more than to themselves. Because they do not sleep peacefully until justice is done to the victims. Because they will continue to fight until Iran has a better future.

But commitment cannot remain individual: it is only fully realized in the collective. That is why the Iranian resistance needs us. To commit is to consent to society. There is nothing more civilized than commitment. It is an act of faith in the human will. Just for that, as they say in Africa, we’re together. Yesterday. Today. And tomorrow.