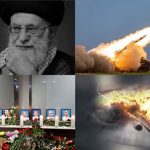 Written by Esmail Mohades on February 17, 2020. Posted in NEWS

A Ukrainian airliner was shut down by the Iranian regime on Jan, 8, killing 176 people on board.

On 8th January, the Iranian regime was in the middle of launching missiles towards American targets in Iraq. It was carrying out these attacks in retaliation against the killing of Qassem Soleimani, the commander of the Quds Force, an extra-territorial branch of the Islamic Revolutionary Guard Corps (IRGC). While these missiles were being launched, a passenger aircraft was shot down, killing all on board – 176 passengers and crew.

Initially, the Iranian regime tried to deny that it had anything to do with the incident, claiming that the plane had simply crashed due to technical issues. It even concocted a story saying that Iranian technicians had warned the plane not to take off.

The disclosure of the audio makes it clear that the control tower, and by extension the #Iran regime’s authorities, had been immediately informed of the shooting down of the Ukrainian passenger jethttps://t.co/hRD7heLk7n#FreeIran2020 #MEK #UkranianPlaneCrash @USAdarFarsi pic.twitter.com/knA0PqGOot

However, it could not avoid the truth becoming public, despite its best efforts. Bulldozers were seen on the crash site and it was very clear that Iran was trying to pass the incident off as being an aircraft failure. The fact that the regime proceeded so quickly to razing the crash site and remove very important evidence and highly sensitive and valuable information is very telling.

Last week, the country’s foreign minister Mohammad Javad Zarif said that after extensive attempts, it is impossible to get any data from the aircraft’s black box. He also said that it would not be handed over to a third country for further investigation.

The incident is one that should not have happened in the first place. This is something that the country’s own industry experts are saying. The fact that the IRGC was conducting missile attacks and other military activity means that every single passenger flight should have been canceled until the confrontations had ended. This directly implicates Supreme Leader Ayatollah Ali Khamenei and a number of senior IRGC commanders.

Standard procedures dictate that every national airport control office should be made aware of missile launches. The IRGC’s failure to inform is nothing short of disgraceful. On top of this, the Supreme National Security Council (SNSC) had been informed about the missile action. The SNSC is chaired by Iranian President Hassan Rouhani who is, as a result, also responsible for the downing of the Ukrainian plane.

This catastrophe should have been easily prevented, but it was the series of failures and the deliberate withholding of information made by senior officials that allowed it to happen. The regime’s claims that the aircraft was taken for a cruise missile by the IRGC missile defense system is utter nonsense because the plane was flying as scheduled on its predefined flight path. It was adhering to its trajectory and it was gaining altitude at regular speed. Furthermore, its dimensions are that of a plane – not of a cruise missile!

The Iranian regime is clearly trying to cover up and minimize its involvement in the air tragedy. However, its denials and misinformation show that the regime has more to hide than it cares to let on. Once again, it is up to the international community to ensure that the regime is not given a free pass for its malign intentions and actions.