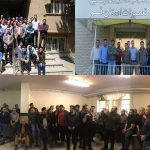 MEK-Iran: Six Protests Took Place Across Iran Over the Weekend

Photo credit Iran News Wire-Protests broke out in Tehran, Qom, and Karaj. against the mounting economic crisis that has engulfed the Iranian economy.

Over the weekend, protests broke out in Tehran, Qom, and Karaj. Brave inhabitants of these cities turned out to protest the mounting economic crisis that has engulfed the Iranian economy.

In total there were six protests held across the country. Several of them were undertaken by the disabled community. People with disabilities gathered outside the offices of the Planning and Budget Organization in Tehran. They were protesting the regime’s mismanagement, corruption and weak rule of law. The protestors held placards which read: “Rehabilitation insurance is our right!”

#IranProtest April 28- #Tehran
A group of poultry farms employee gathered to protest to their economic woes.

A number of poultry factories that had been shut down as a result of government mismanagement. pic.twitter.com/KMKQ2ISSvR

Elsewhere, workers from the Iranian poultry industry also arrived in Tehran to protest outside the Iranian Ministry of Agriculture’s offices. They were protesting the high price of chicken.

The mullahs and their Revolutionary Guards (IRGC) smuggle chicken out of the country for sale in neighboring countries, leaving Iranian domestic supply short-handed. This limited supply has driven the price of chicken up, leaving many Iranians unable to put food on the table for their families.

Government mismanagement has also prompted the closure of several poultry farms across Iran.

In Tehran, Karaj, and Qoam, employees from the Power Transmission Maintenance Engineering Company also turned out to protest. They were protesting against unpaid wages and the forced privatization of the company.

They are the latest workers to turn out to strike unpaid wages. As the economic crisis deepens, fueled by the mullahs’ rampant corruption and economic mismanagement, many segments of the Iranian economy have turned out to protest unpaid wages.

Just last week, teachers and construction workers organized their own protests to demonstrate their anger at their unpaid salaries and wages. As many parts of the Iranian workforce are not receiving payment, families are slipping deeper and deeper into poverty.

There have even been reports of families selling organs to put food on the table for their children, in what amounts to some of the most severe economic hardship found anywhere on earth.

The IMF expects the situation to worsen before it gets better. Its projections predict that inflation will reach 40% in 2019, up from 34.9% at the end of 2018. For Iranian families, this will mean an even greater struggle to make ends meet.

Last year, The President-elect of the Iranian opposition, Maryam Rajavi released a statement addressing the worsening economic crisis in Iran. She said that “it is possible to eradicate poverty, unemployment, shanty dwelling, water shortage, and environmental calamities. But, before anything else,” she said, “the trampled political rights, specifically the right to sovereignty of the Iranian people, must be restored and revived.”