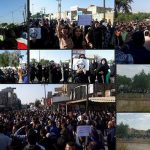 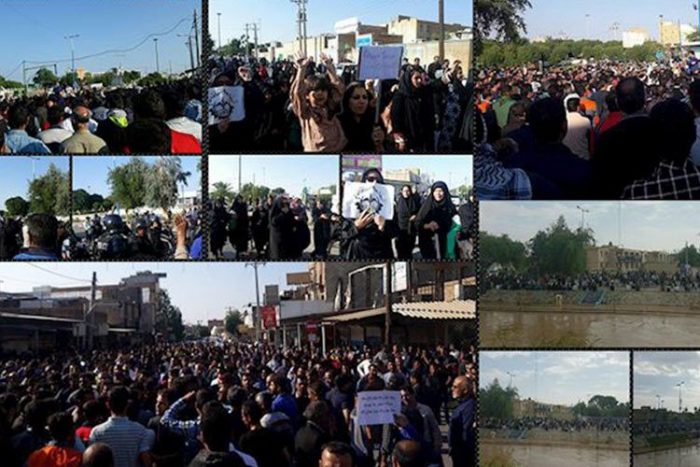 Haft Tappeh Sugarcane Mill labor workers started their recent strikes to protest to their unpaid wages. The protests were suppressed by Iranian regime’s security forces and many of the workers were arrested- November 2018

The Free Union of Workers released a statement on Saturday condemning the conditions imposed upon the workers of the Iran National Steel Industrial Group in Ahvaz after their recent release from prison on bail.

In its statement, the union denounced the continued repression of the workers, writing,

“The extraction of a 2.5-billion-rial bail from the families of Karim Siahi and Tariq Kholfi shows that wave of repression continues against the workers of Iran National Steel Industrial Group, who were demanding for their most basic rights during their 38-day strikes and streets protests.”

Siahi and Kholfi are representative of the Ahvaz steelworkers who were arrested along with several dozen others during a series of nighttime raids on workers’ homes in December. The two labor representatives were finally released on Saturday afternoon.

The Ahvaz steelworkers embarked on a weeks-long strike beginning in November to protest months of unpaid wages and poor working conditions. As the strikes continued they garnered widespread attention and support from human rights activists and labor groups across the world. The MEK and the Iranian Resistance vocally supported the striking workers.

The Iranian regime cracked down on the striking workers, accusing them of “sedition” and threatening them with arrest. After over a month of protests, regime security forces conducted a series of midnight raids on the houses of striking workers over a period of several days, arresting dozens. Some people were so frightened of arrest that they slept on the streets rather than risk possible arrest at the hands of violent security forces.

In its statement, the union warned that the regime plans to create false criminal files for the workers so that it may continue to harass them and potentially prosecute them in the future. The statement says, “With made up and vague criminal files, security institutions plan to keep the threat of judicial prosecution over the heads of the brave workers of this big industrial complex and force them to give in to tyranny and the trampling of their rights and salaries.”

The statement also thanked supporters of the protesters and restated its solidarity with the Ahvaz steelworkers, writing, “We thank all workers, teachers, retired government employees, students and other noble people who have joined us in this campaign to protest against the arrest and incarceration of the workers of INSIG. We once again reiterate our deepest solidarity with the just struggles of the steelworkers of Ahvaz for their most basic and unalienable rights and will continue our strikes, protests, and marches.”

The Free Union of Workers has demanded that all criminal charges against the 43 workers who-who arrested in December be dropped.

The Ahvaz Steelworkers strikes took place alongside the Haft Tappeh factory workers’ strike, also in Ahvaz Province. The workers of Haft Tappeh were striking in protest of not receiving their wages for several months and poor working conditions due to the privatization of their factory. The two groups of striking workers came together in solidarity during their strikes and protests.

The regime reacted to the Haft Tappeh strikes in much the same way as they did to the steelworkers’ strikes. A number of factory workers were arrested for their participation in the strikes and protests after the regime cracked down on the protests. One worker who was recently released from prison publicly stated that he was tortured while he was in custody. He is now being prosecuted by the regime’s judiciary for revealing this fact.