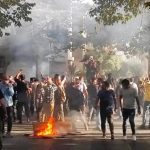 Written by Esmail Mohades on December 2, 2022. Posted in NEWS 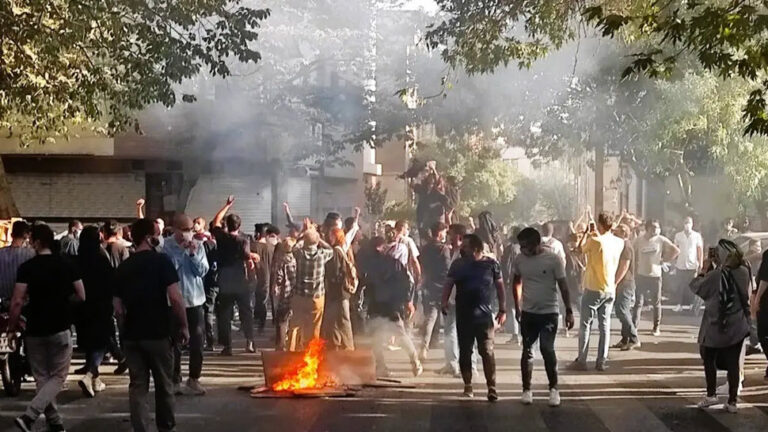 According to the latest reports protesters in at least 277 cities throughout Iran’s 31 provinces have taken to the streets for 75 days now seeking to overthrow the mullahs’ regime. Over 660 have been killed by regime security forces and at least 30,000 arrested, via sources affiliated to the Iranian opposition PMOI/MEK.

On Thursday, the Iranian people continued their nationwide uprising for the 75th day, following the death of Mahsa Amini, a 22-year-old woman arrested by morality police in Tehran on September 13 for allegedly violating the country’s strict dress code for women. Protests erupted in response to the event, which has since spread to at least 277 cities. According to sources from the Iranian opposition People’s Mojahedin of Iran (PMOI/MEK), the regime’s forces have killed over 660 people and arrested over 30,000. The MEK has released the names of 541 protesters who were killed.

Initial reports indicate those truck drivers at the Shiraz refinery in south-central Iran are on strike, continuing a nationwide movement that is gaining traction. Truck drivers in Sanandaj and Marivan in western Iran’s Kurdistan Province, as well as ports in Bandar Abbas, are on strike. According to reports, many drivers have been on strike for three weeks. According to local activists, hundreds of trucks are parked at a city terminal and nearby roads. Similar strikes were reported in Kermanshah and Dehaqan, both in Isfahan Province.

Protesters set fire to the local office of Khamenei’s representative in Mahdasht, a city in Alborz Province west of Tehran, according to reports. Nurses from Khomeini Hospital in Tehran also held a protest gathering, demanding answers from regime officials on long-standing demands. On November 29, nurses at Isfahan’s Al-Zahra University Hospital also held a protest rally.

On Monday night, protesters in Kermanshah’s Pardis district took to the streets to launch anti-regime demonstrations, erecting roadblocks and seizing control of their streets. Workers at the Maad Koush Steel Company in Hormozgan Province, southern Iran, went on strike as another sector of the country’s industry joined the nationwide strike. According to other reports from Sanandaj, schoolchildren were seen erecting roadblocks by emptying dumpsters and setting fire to the trash.

Students at Tehran University and the National University of Iran gathered on Monday morning to protest the arrests and suspensions of their classmates imposed by authorities in order to instill fear among the students. Students and professors from other schools in the capital, including Allameh Tabataba’i, Sharif, and the Hakim Sabzevari University in Sabzevar, were seen boycotting classes and chanting, “Fear us as we are all together!” and “Freedom! Freedom! Freedom!”

The UK-based Express daily website recently published an article written by a MEK Resistance Units member inside Iran about the ongoing struggle against the mullahs and the regime’s conspiracies.

“For years, the regime has attempted to divide the people based on ethnicity. However, that strategy has failed. When the regime massacred our compatriots in Zahedan in destitute Sistan and Baluchestan Province, people in other cities took to the streets and chanted, ‘From Zahedan to Kurdistan to Khuzestan, I will sacrifice my life for Iran’. People are determined to liberate Iran and reclaim their homeland,” according to the article.

“All we are asking is that our legitimate rights be recognized… Proscribe the IRGC as a terrorist entity; close Iranian embassies; guarantee our unhindered access to the internet. The West should take these actions, and we will overthrow the ayatollahs ourselves,” she explained. Iranian opposition President-elect Maryam Rajavi of the National Council of Resistance of Iran (NCRI), emphasized the Iranian people’s determination to destabilize the mullahs’ regime and the importance of holding the mullahs accountable for their crimes against humanity.

The uprising that started in September attests to the deep roots of the Iranian people’s movement for freedom. It brings to light the magnificence of this movement and its definitive victory. The power of the protesters is far greater than the forces of repression#IranRevolution pic.twitter.com/ucKlsGOaB0

“The world should quickly react to the deaths of teenagers in Iran. They are either killed in the streets or in prisons or die after being released due to pressure and torture. The world should compel the regime to release the arrested teenagers immediately,” the NCRI President-elect emphasized.