Around 272 Iranian cities face water shortages under the mullahs’ rule

Written by Amineh Qaraee on September 7, 2022. Posted in NEWS

The irony is that massive floods have also hit many cities, towns, and villages across Iran in recent weeks. This demonstrates the unfortunate reality that the mullahs’ regime and its destructive policies are to blame for Iran’s escalating water crisis.

Water scarcity has sparked major protests in the Iranian cities of Shahr-e Kord and Hamedan in recent days. Social media videos have revealed the scale of the disaster, with hospitals and other major public health services being severely impacted. In a country with abundant water resources, hundreds of cities and thousands of villages in Iran are currently experiencing severe water shortages. In some areas, people have no access to running water other than tankers that arrive on a regular basis to provide the bare necessities.

“Water stress or scarcity occurs when demand for safe, usable water in a given area exceeds supply,” according to the Council on Foreign Relations (CFR). “On the demand side, agriculture consumes roughly 70% of the world’s freshwater, while the remainder is divided between industrial (19%) and domestic (11%) uses, including drinking. Sources of supply include surface waters such as rivers, lakes, and reservoirs, as well as groundwater accessed via aquifers.”

Water scarcity is often divided into two categories, according to experts in this field: physical scarcity, when water scarcity exists due to local ecological conditions, and economic scarcity, when there is insufficient water infrastructure. Water stress is frequently caused by the combination of the two.

“Almost always, the drinking water problem has nothing to do with physical water scarcity,” said Mark Giordano, a water management expert at Georgetown University in the United States. “It has to do with a lack of financial and political resources to invest in infrastructure to provide people with clean water.” 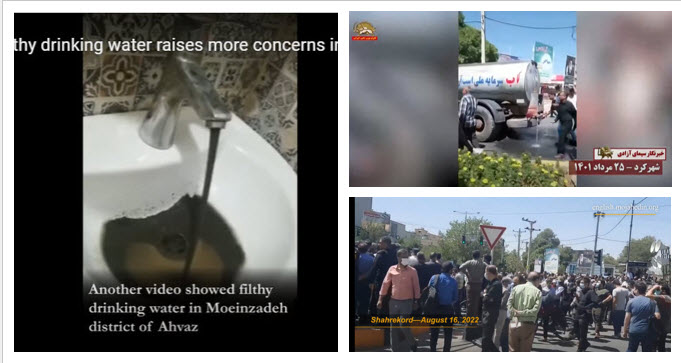 When people are deprived of safe drinking water, diseases such as cholera, typhoid, polio, hepatitis A, and diarrhea spread. This disaster has occurred as a result of the Iranian regime’s destructive policies, as well as a regime that fails to provide the people with safe and clean potable water.

The regime’s priorities in Iran are the main human factor. Priorities that not only do not benefit the people but are also detrimental to their interests. These include nuclear projects, missile and drone programs, malign activities in the region, proxy force financing, and the spread of terrorism, all of which cost a lot of money and waste national capital.

According to Atabak Jafari, CEO of the regime’s Water and Wastewater Engineering Company, 272 cities are experiencing water stress, and the number of villages requiring mobile water supply has increased significantly in the summer.

According to Jafari, mobile water supply was available in 4,953 villages in the country in May of this year, but this increased to 6,000 to 7,000 villages during the summer months. Anoushirvan Mohseni Bandapi, the director of the Center for Air Quality and Climate Change, recently stated that “Iran’s water stress will most likely exceed 80% by 2040.”

According to the Hamshahri newspaper, the provinces of Sistan and Baluchistan, Tehran, Khuzestan, Khorasan Razavi, East Azerbaijan, and Alborz currently have the most water stress in Iran, with approximately 53% of the country’s dam capacity being empty.