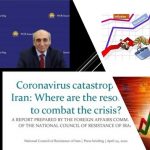 Written by Mohsen Aboutalebi on October 8, 2021. Posted in NEWS

According to the Iranian opposition group The National Council of Resistance of Iran (NCRI), and the People’s Mujahedin of Iran (PMOI / MEK Iran),  the Iranian Chamber of Commerce Research Center has published new research that examines the state of Iran’s economy over the last ten years and answers the question of why the Iranian economy has not recovered despite the government’s claims that all measures have been done.

According to ISNA, Mohamad Ghasemi, the head of this research institution, responded to this issue on September 9: “First, Iran’s domestic and foreign policy does not serve to solve economic issues. If we say that economics is a priority, all political power, both at home and internationally, should serve the economy, but it is not. So, unfortunately, we have to say in our speeches that the economy is only the first issue of the country.”

Other goals for the regime include interfering in regional affairs, missile manufacture, and a nuclear program, all of which are draining the country’s resources.

“Unfortunately, there is no scientific perspective for managing economic issues in the country. If you ask members of the Expediency Discernment Council, Parliament, or the government how economic problems will be solved, they have scattered and traditional views on these issues,” Ghasemi added.

This is a clear acknowledgment regarding the unprofessional and ineffective officials who have no economic expertise.

He cited the dispersion of economic policy-making power in the country as the third reason for the current predicament, saying, “In our country, it is unclear who is responsible for fiscal, monetary, or foreign exchange policymaking.” Everything is dispersed between a number of high councils and institutions.”

A mafia-run economy in which no one takes responsibility for the many branches of the country, and capital flows freely between them with no supervision or control.

Ghasemi considered the fourth reason with a look at oil revenues and added: “The answer to this question should be clear: what are we going to do with the oil revenues if the sanctions are lifted? Now, during the sanctions, what we do with oil revenues is to supply basic goods and, to some extent, supply raw materials for production,” He continued.

“This threatens us. Because it’s unclear how long this is going on, and while the other world is moving towards alternative energy, we may find out at some point that some of our underground resources are no longer functioning economically.”

Finally, Ghasemi acknowledges the country’s economic backwardness, which is largely reliant on its oil resources and lacks significant progress in science and technology, leaving the country and nation without a future and unable to compete with other nations, despite progress in most other countries.

Instead, the regime has squandered all of its resources and people for the sake of its futile existence, which has lasted more than 42 years.