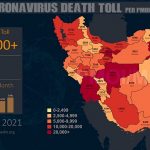 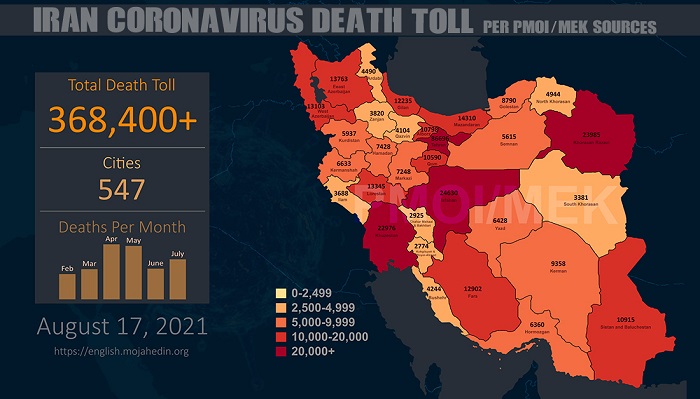 The Covid-19 crisis is afflicting Iran. The new Delta variety has quickly spread throughout Iran, killing an Iranian every two minutes. The regime’s manipulated figures also reveal the harsh reality of an Iranian humanitarian disaster.

“The number of people with Covid-19 is increasing, as is the number of deaths. This occurs whilst the fifth Covid-19 wave is still in its early stages. On August 14, the state-run Hamdeli daily said, “We require at least 180 million doses of credible foreign vaccines given the current situation.”

As of August 15, over 368,400 persons had died of the new coronavirus, according to the People’s Mujahedin of Iran (PMOI / MEK Iran), and the National Council of Resistance of Iran (NCRI).

The regime’s brutal Covid-19 program is to blame for the current situation. For at least a month after the virus arrived in Iran, the regime denied its presence. When the virus spread across Iran and people began to die in large numbers, the regime’s Supreme Leader, Ali Khamenei, refused to allow reliable vaccines into the country.

Hiding the death toll from the World Health Organization

Alireza Zali, the leader of the Tehran Covid-19 Task Force, admitted in a surprising remark on August 12: “When the World Health Organization experts came to Iran, instead of consulting with them, we constantly asked them to praise the [regime’s] health system in the media.

We hid the death toll from the World Health Organization. We rejected the international aid and Médecins Sans Frontières without having much knowledge about the virus and did not seek international advice.”

The regime has long tried to blame the Covid-19 dilemma on Western sanctions. However, as Arman points out every day, Zali’s new words “underline a crucial fact,” namely that “sanctions that were continuously blamed by [officials] and the media for the current situation did not block the imports of vaccines.” This issue was triggered by official cruel judgments and a strategy of neglecting people.”

The medical staff is exhausted

“The country and its people can no longer afford to pay the price for the government’s disastrous decisions. Hospitals have been without a facility to accept patients for some time, and medical staff is exhausted.

The healthcare system in the country is disintegrating, and the period of trial and error is over. “Such experiences have frequently resulted in catastrophic outcomes,” the Aftab-e Yazd newspaper said on August 15.

(NCRI) and (PMOI / MEK Iran): Nurses and Doctors in hospitals are under tremendous pressure due to hard work in the coronavirus crisis in Iran.

The regime’s “enemies,” according to the state-run Resalat daily, are “seeking to put the government at the forefront of the problem of growing the number of Covid-19 deaths in Iran and so blame the Supreme Leader for these casualties.”

“blessing” had turned into a nightmare

“Demonstrating the inefficiency of the government to control coronavirus is a tactic that can be dangerous if continued. The enemy seeks to increase the gap between the people and people using the coronavirus and target Khamenei. Meanwhile, all the officials, decision-makers, and the country’s media must confront this cowardly and inhuman wave and shed light on the suspicions,” The Iranian opposition pouring light on Khamenei and his regime’s role in the crisis might have severe consequences, according to Resalat.

In other words, the Iranian people are aware that the regime is to blame for the current Covid-19 disaster, and that Khamenei has failed to manage the restive community by exploiting the outbreak. For him and his dictatorship, what he previously referred to as a “blessing” had turned into a nightmare.

(NCRI) and (PMOI / MEK Iran): The regime’s main strategy is to increase repression against anyone who is thought to be a potential threat to the regime. This includes intimidating and humiliating youth in the street and stepping up death sentences and executions.