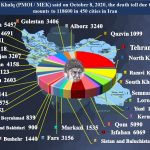 MEK: Iran’s Coronavirus Crisis is Getting Worse by the Day

Written by Esmail Mohades on October 9, 2020. Posted in NEWS 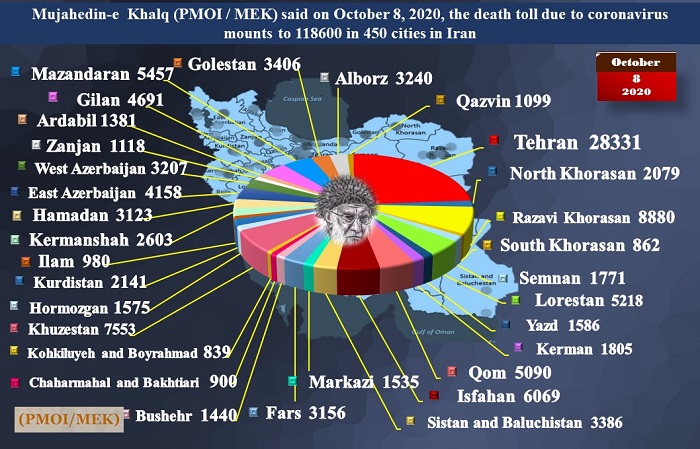 The MEK knows and so do many more Iranians that the country is facing economic disaster part of which is due to the regime whittling away the wealth of the country on missiles, nuclear weapons, and movies created which discredit the MEK.

The disastrous death toll of 119,400 from the virus can no longer be ignored by the regime and the situation is getting worse by the minute. These statistics are being ignored by the regime but reports accessed by the People’s Mojahedin Organization of Iran (PMOI / MEK Iran) reveal that as of Wednesday, more than 119,400 Iranians had died from COVID-19. The regime is still remaining firm on its figure of just 27,888, but Mohammad Reza Mahboub-Fa, who used to be part of the regime’s Coronavirus Taskforce, admitted when interviewed by Jahan-e Sanat daily that the regime’s figure only amounts to about 25% of the true numbers who have died.

More than 118,600 people have died of the novel #coronavirus in 450 cities checkered across all of Iran's 31 provinces, according to the Iranian opposition PMOI/MEK.

Hassani Rouhani, the regime’s president, blames the people for not following the advice given to them like the wearing of masks.  What he is forgetting to admit is that so many Iranians live in poverty due to the regime’s economic policies that few can afford the luxury of buying face masks and hand sanitizers, let alone stay at home and not go to work.

Even the state-run Aftab-e Yazd daily said that where mask-wearing is compulsory in some countries the governments are providing this personal protective equipment for free but not in Iran. Overall, the reason that people haven’t been able to protect themselves and their families are because they cannot afford it. What puts even more pressure on the people is the fines imposed by the regime for anyone who is not wearing a mask when in a public place.

The regime admits the dangerous situation the country is in and Masoud Mardani, a member of the Scientific Committee of the National Coronavirus Combat Taskforce (NCCT) revealed that of all the hospitals he has visited there is not one vacant bed.  Alireza Zali, who leads the NCCT in Tehran announced on state TV that on Tuesday 116 people had lost their lives to COVID-19 in Tehran in 24 hours. Overall, he said those infected make up 25 in every 100,000 people which is the red level, but in Tehran, it is far worse.

Empty food baskets appear to be a norm in today’s #Iran. But as this is becoming more commonplace the #Iranian regime handing out skyrocketing loans to their relatives, so they can go out to dinner and dine on shark fin soup and imported expensive fruit.#MEK #FreeIran2020 pic.twitter.com/F7cpqHdnDb

Why is it so bad in Iran?

The Iranian regime revealed the presence of COVID-19 in Iran late in February. That was more than 6 weeks after the virus had arrived in the country from China. The National Council of Resistance of Iran (NCRI) published reports of the regime’s National Emergency Organization showing COVID-19 patients in the hospital in late January. The election was just about to take place at that time so the COVID-19 outbreak was concealed as the regime did not want to deter people from voting.

When it was no longer possible to conceal the nature of the crisis it was not only too late but the regime offered no financial help to victims and their families and as soon as it could it told people to return to work and school which has led to even more casualties as the virus spread rapidly throughout the provinces.

Iranian regime tries to hide the reality of expansion of coronavirus in #Iranhttps://t.co/ptrfO2gEFC#Coronavirius #WHO #MEK @USAdarFarsi pic.twitter.com/VHQsroEvqR

COvid-19 came at a bad time for the regime as a plethora of protests that have been taking place showed how unpopular the regime’s policies are. It had cracked down by killing 1500 protesters in November of last year according to the report by MEK, but it couldn’t behave in the same way to COVID-19 victims even though it hoped the MEK and other branches of the resistance movement would keep their heads down while trying to deal with the mayhem caused by COVID-19. Reuters confirmed in a special report on December 23, 2019, about the deadly crackdown on November nationwide protests in Iran the death toll of 1500 that was announced by the People’s Mojahedin Organization of Iran (PMOI / MEK Iran) on December 15, 2019.

However, the opposite has taken place as the poor uncaring response of the regime has angered the people. The poor response is due to decades of neglecting the people but now they have had enough and want their share of the wealth of the country which they have worked hard to create.

The MEK knows and so do many more Iranians that the country is facing economic disaster part of which is due to the regime whittling away the wealth of the country on missiles, nuclear weapons, and movies created which discredit the MEK.

The situation regarding COVID-19 has got so bad now that it is time to get the international community to investigate and assist those who have suffered economically from COVID-19.  But as the opposition president, Mrs. Maryam Rajavi has said recently, a regime change is the only long term solution where freedom and democracy in Iran would prevail and the needs of everyone would be met.