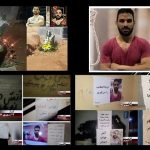 Written by Amineh Qaraee on September 16, 2020. Posted in NEWS 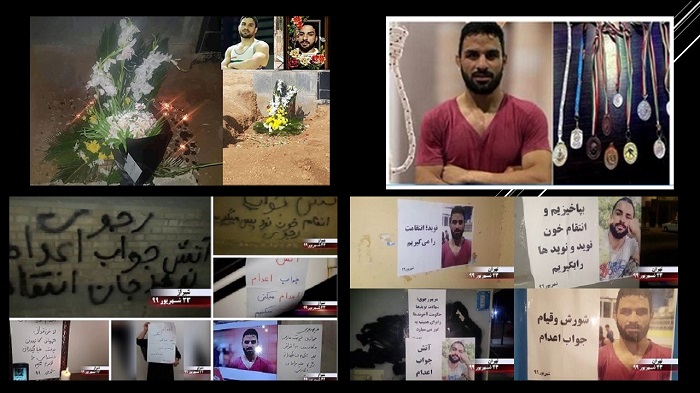 Various cities – Activities of the supporters of the MEK – “Down with Khamenei” – Brave youth in Fars Province and in the city of Kazerun, rise up against the unjust sentences for Afkari brothers”.

When it became clear that the Iranian regime was going to imminently execute wrestling champion Navid Afkari, pleas from around the world appeared on social media calling for his life to be spared.

Despite this, the regime went ahead with the execution last Saturday. Political prisoners across Iran have expressed their solidarity, vowing in open letters sent from prison to never give in to the brutal and criminal regime.

Navid Afkari Sangari was a 27-year-old sports champion that was arrested during the nationwide protests in 2018. While in custody, he was brutally tortured and was forced to make false confessions which were then used to sentence him to death.

While in prison, he sent a letter explaining some of the torture that he had endured. He was beaten with batons and sticks across his whole body. He also had a plastic bag placed over his head, with it only being removed when he was about to suffocate to death. Like many political prisoners in Iran, the torture he endured was not just physical, but also psychological.

September 12
Footage of #NavidAfkari's burial in the village of Sepidan, south-central #Iran
Authorities had dispatched dozens of security and intelligence agents to prevent gatherings and possible anti-regime protests.pic.twitter.com/HVwzu16hG9

After news broke about his execution, there was international uproar. The purpose of his execution is to create an atmosphere of fear. Society is restive and the regime is desperate to prevent another major uprising like the one that started in November last year. It knows that if another uprising were to happen, the end would be very close to the regime.

A high-ranking Iranian official so-called Supreme Court Judge Ahmad Sajjadi has admitted to the role played by the People’s Mojahedin Organization of Iran (PMOI / MEK Iran) during the uprising in November 2019.

After the brutal execution of Iranian athletes, political prisoners vow to continue standing up against the regime and Resistance Units, and MEK Supporters Call on Youth To rising Up in achieving freedom and democracy in Iran.https://t.co/0GrNKGYdBR

However, the regime’s plans are in fact having the opposite effect. The people are more determined than ever to see the regime fall and they want it to be held accountable for all of its crimes – from the executions of innocent protesters the whole way back to the 1988 massacre in which 30,000 political prisoners were executed during one single summer.

If a funeral were to be held for Navid, it is certain that it would have sparked protests the whole way across the country, with millions of outraged people unable to hide their anger. The regime’s secret burial of his body has denied his family from being able to hold a proper mourning ceremony, but this does not mean that Navid’s execution will be forgotten.

The grave of #NavidAfkari, a national hero of #Iran pic.twitter.com/ImE6gKWuzm

The Iranian regime’s impunity over the past four decades has emboldened it. The regime has never been held accountable for its human rights abuses.

On September 12, Mrs. Maryam Rajavi, the President-elect of the National Council of Resistance of Iran (NCRI), said:

and called on the international community to take urgent action to release the Afkari brothers, other detained protesters, and all political prisoners who are in danger of being executed.

It is imperative for the UNSC, UN High Commissioner for #HumanRights and the EU to take urgent action to save the lives of prisoners in #Iran. They should set up an international fact-finding mission to investigate the killings in November 2019 and visit Iranian prisons.

This is why the international community must stop appeasing the Iranian regime. Foreign governments have been too scared to rock the boat with Iran, instead of hoping that it would moderate its behavior. Clearly this is never going to happen considering that the regime relies on its suppression of the people for its survival.

The people have made it clear that they will not tolerate the Iranian regime’s criminal brutality. It is now up to the international community to do the same.

Following Navid Afkari’s hanging, Resistance Units, and MEK supporters call on youth to rise up. During the past few days, Resistance Units and supporters of the Mujahedin-e Khalq (MEK / PMOI) in Tehran and Shiraz, Navid’s hometown, and other cities, have posted placards, banners, writing slogans in public places, reaffirming their commitment to continue Navid’s path, in achieving freedom and democracy in Iran.

#MEK supporters and resistance units inside #Iran also shared their messages of protest against the execution of the martyr #NavidAfkari and the brutal oppression of the #Iranian regime. pic.twitter.com/Wlhqpyi34C