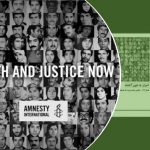 Written by Esmail Mohades on August 22, 2020. Posted in NEWS

MEK: justice for the massacre’s victims and the hopes the U.N. General Assembly will also bring up the matter.

It was not until last Tuesday that Amnesty International’s Farsi Twitter account posted a document from 1988 reminding readers that the human rights organization had made every effort to stop any atrocities.

On Saturday, the National Council of Resistance of Iran (NCRI) and The People’s Mojahedin Organization of Iran (PMOI / MEK Iran) will host an online conference to discuss the 32-year-old massacre of more than 30,000 political prisoners in Iran and repeat its demand for a U.N.-led inquiry. The conference is part of a campaign spanning many years to help secure justice for the massacre’s victims and the NCRI hopes the U.N. General Assembly will also bring up the matter.

Amnesty International’s 1988 “Urgent Action” statement was released after the families of many political prisoners called up the organization to report that visits to the prisoners had been stopped. Amnesty does say that this was just a lead up to the carrying out of mass executions and mysterious disappearances and it told the regime to halt any executions that were politically motivated.

It wasn’t just Amnesty International that condemned then regimes action. Ali Hossein Montazeri, who was supposed to be Ruhollah Khomeini’s successor, condemned the massacre as “the worst crime of the Islamic Republic.” He was ousted from the leadership and went on to spend the last years of his life under house arrest.’

Unfortunately, the regime saw nothing wrong with its actions and just continued its violence up to this day. Much of it was targeted at the main opposition movement, the People’s Mojahedin Organization of Iran (PMOI / MEK Iran).

Last November, the whole country was shaken by the 2nd anti-government uprising in just 2 years. This time the slogan was ‘’ death to the dictator’’. This, unfortunately, ended up with the Islamic Revolutionary Guard Corps gunning down crowds of protesters while arresting as many activists as it could. The incident led to the early deaths of 1,500 people.

These crackdowns all lead back to the growing force of the (PMOI / MEK Iran). Even the regime’s Supreme Leader, Ali Khamenei, acknowledged that the recent protests were ‘’led by the MEK.’’ In total, the MEK has lost around 120,000 members and supporters in its persistent fight for democracy. It is getting increasingly recognized both at home and abroad as the only viable alternative to the theocratic regime which currently holds power. The current position is that leading world powers formally condemn the 1988 massacre perpetrators, and may pursue charges against them at the International Criminal Court.

By: @STRUANSTEVENSON
It is the duty of the UN to examine this case and bring its masterminds and perpetrators to justice…The mullahs must be held to account in the international criminal courts. #Iran #HumanRights #1988Massacre https://t.co/zG1QJGiq70

Anybody who has at one time or another shown support for democracy and human rights in Iran should now demand that their own governments seek an independent investigation into what has come to be known as the “worst crime of the Islamic Republic.” It is time to make it clear to the mullahs that these sorts of crimes are no longer acceptable.

If the international community fails to make this message clear and unequivocal, it risks repeating the mistakes of 1988, when Amnesty International and the MEK warned of an unfolding crime against humanity, but those with the power to intercede decided instead to do nothing.