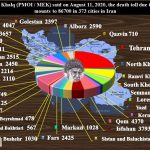 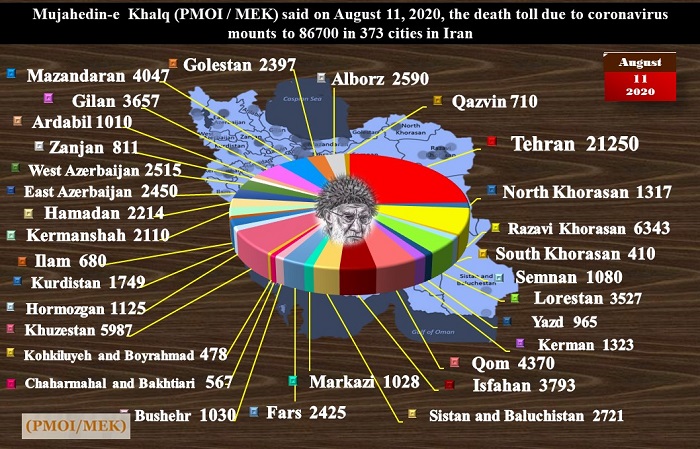 The Coronavirus outbreak in Iran continues to claim the lives of many Iranians every day. The situation has not been brought under control by the Iranian government and the people continue to be left extremely vulnerable to this virus that can be deadly to many.

The latest reports from the main opposition to the Iranian regime – the People’s Mojahedin Organization of Iran (PMOI / MEK Iran) – indicate that more than 86,700 people have lost their lives in Iran after contracting COVID-19.

The People’s Mojahedin Organization of Iran (#MEK) announced that the #Coronavirus fatalities in 373 cities across #Iran had passed more than 86,700.

Many prisoners, including political prisoners, have been infected with Coronavirus. #COVIDー19 https://t.co/lnoYqW5q9H

The virus has spread to 373 cities across the country, affecting every single province.

The (PMOI / MEK Iran) has been compiling accurate statistics since the beginning of the outbreak because it was suspected that the Iranian regime would lie and deceive the people and the international community – something that is highly counterproductive at a time when complete transparency is vital. On this point, the regime’s official death toll stands at just 18,616, proving that the regime cannot be trusted.

The Tehran area has been the worst-hit, with more than 21,250 deaths there alone.

Cover-ups and deception are common in Iran, with the government always downplaying or trying to hide major issues, such as the economic issues or the high levels of unemployment. More than ever, the government’s deception is hurting the people and some have been unable to keep quiet about it.

According to information provided to Jahan-e-Sanat by this member of the COVID-19 Task Force, the actual number of the coronavirus casualties is 20 times higher than what is announced by the Ministry of Health.#Iran#COVID19https://t.co/WDY3KUX2OB

Recently, a member of the National Coronavirus Task Force spoke out about the official figures provided by the regime, stating that he reckons the true number of cases and deaths is twenty times higher. The media outlet that published Dr. Mohammad Reza Mahboubfar’s words, the state-run Jahane Sanat daily, has now been shut down because of this.

Other concerns were raised by the Deputy Health Minister who pointed to the inequalities in society. Iraj Harirchi said a few days ago that treatment for COVID-19 costs the people between 100 and 500 million rials, meaning that it is inaccessible to the poorest in society. He said that those who cannot afford it are left in despair and that this anger will linger and one day “burst”. Harirchi warned the government that it is something that might not be a problem now, but one day the government will face the anger of the people.

The absolute poverty category in Iran is getting bigger and bigger as the years go on. Accessing treatment is something that is very out of reach for many when we consider that ordinary workers will take home approximately 15 million rials every month.

A member of the scientific council of Baghiatollah Medical Sciences University, Moayed Alavian, also a former deputy health minister, called President Hassan Rouhani out on his lies. He said that his claims that Iran is not behind the rest of the world in terms of testing and vaccinations are “an utter lie”. He questioned: “Why are we lying to the people that we aren’t behind the world? People want transparency and honesty.”

Mrs. Maryam Rajavi, the President-elect of the National Council of Resistance of Iran (NCRI), again called on the United Nations to take immediate action to stop the ongoing tragedy in prisons and to force the regime to release prisoners temporarily until the end of the Coronavirus crisis.

Many prisoners including political prisoners of Evin Prison, Great Tehran Penitentiary, the Central Prison of Urmia, among others, have contracted the #coronavirus and so, thousands of prisoners in #Iran are vulnerable to the disease. #FreePoliticalPrisoners