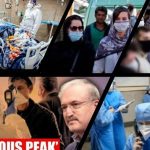 Written by Mohsen Aboutalebi on June 6, 2020. Posted in NEWS

The MEK. Media both within Iran and internationally are reporting a second wave of infections.

More than 49,500 people in 325 cities in all 31 provinces in Iran have died from COVID-19, the disease caused by the novel coronavirus, according to the most recent report from the MEK. Media both within Iran and internationally are reporting a second wave of infections, and even the regime’s official figures—numbers that are widely disregarded as undercounts—reflect a new peak of deaths.

Deaths by province include:

The regime’s Minister of Health issued a statement on state television Thursday warning, “Calamity will strike us at the last minute. Coronavirus is not over. It may surprise us again at any moment.” It is worth noting that the MEK predicted this crisis when the country was prematurely re-opened in mid-April and has sounded alarm bells repeatedly since then.

Opposition to the #Iranian regime, the #PMOI #MEK #Iran closely monitoring the outbreak because it knows that the regime cannot be trusted more than 49500 died after contracting #COVID19 but the regime’s figures are a fraction of this.https://t.co/r9cZbWQ4Ra @USAdarFarsi pic.twitter.com/4IUvvqX1vw

This belated prediction was followed by a flurry of reports about new cases of coronavirus from provinces around the country. The Quds Force-affiliated Tasnim news agency reported, “These days, we are witnessing the second outbreak of Coronavirus in 10 provinces around the country. Khuzestan, East Azerbaijan, Hormozgan, Sistan and Baluchestan, Gilan, Lorestan, Kurdistan, Bushehr, Mazandaran, and Hamedan have witnessed a growing trend of infection and patients in hospitals in recent days.”

The situation in Khuzestan Province continues to worsen, with officials reporting a surge in new infections. On Friday, a spokesman for the regime’s Minister of Health announced that Khuzestan Province is still a red area. He added that “the provinces of Hormozgan, Kurdistan, Kerman, Kermanshah, and Bushehr, as well as East [Azerbaijan] and West Azerbaijan, are on alert.”

Hospitals in Khuzestan Province are rapidly becoming overwhelmed with coronavirus victims, forcing healthcare workers to scramble to find facilities for incoming patients and leaving no room for those with other conditions. The head of the Public Relations Office at the University of Medical Sciences in Abadan reported that Ayatollah Taleghani Hospital had converted all of its wards to coronavirus units. On Thursday, the state-run Rouydad-24 website reported that the coronavirus ward at Ahvaz Hospital was at capacity and that Medical Sciences University hospital in Ahvaz had to send patients to five new hospitals in the city because of overcrowding.

Over 49,300 people have died of the novel #coronavirus in 325 cities checkered across all of #Iran’s 31 provinces, according to reports tallied by the Iranian opposition PMOI/MEK as of Thursday afternoon local time, June 4. https://t.co/uUo7oKABLR

On Friday, the Revolutionary Guards (IRGC)-affiliated Javan daily reported that 52 members of the Ahvaz Fire Department were infected with the coronavirus.

The second peak of infections has reached Fars Province, leading Iranian physicians to sound the alarm. On Thursday, the Vice-President of Shiraz University of Medical Sciences said, “In the past 24 hours, we have faced a dramatic and unprecedented rise [in coronavirus cases],” according to Javan daily.

On Thursday, infectious disease specialist Dr. Hadi Mottalebi said, “This week, the number of those infected daily has seen a three-digit upward trend. We only had these many hospitalizations in one period, at the peak of the Coronavirus outbreak in the country during the Nowruz holidays. We can confidently say that alarm bells are sounding. The situation awaiting us is a bad one,” according to the state-run IRNA.

The Vice-President of the University of Medical Sciences in Hormozgan Province issued a warning on Thursday, in remarks published by Javan. “In the last two weeks, a very critical and fragile situation has emerged such that if the (protocols) and restrictions in place are not seriously observed, we will face a great challenge next week,” he said.

On Friday, Javan quoted the President of the University of Medical Sciences in West Azerbaijan Province, who described similar conditions in that province. “In the past month, the number of Coronavirus patients in Mahabad has been rising steeply and alarmingly,” he said.

The President of the University of Medical Sciences in Bushehr Province cautioned that coronavirus infections are “on the rise” in the province in comments to the state-run Tasnim news agency, adding, “Bushehr Province is in a state of serious warning.”

Maryam Rajavi, the President-elect of the National Council of Resistance of Iran (NCRI) described the increasing trend of the (COVID-19) as the direct result of the criminal and inhuman policies of the Mullahs regime.