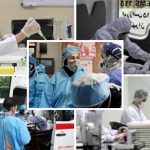 MEK Iran: More than 10,000 medical staff infected with a Coronavirus.

(PMOI / MEK) has been closely monitoring the Coronavirus outbreak since the very start.

The People’s Mojahedin Organization of Iran (PMOI / MEK Iran) has been closely monitoring the Coronavirus outbreak since the very start. It has been especially diligent in its gathering of data because it is no secret that the regime cannot be trusted when it comes to such issues. The regime has traditionally covered up crises by under-reporting true statistics, and blatantly lying to the public. This crisis is no different.

According to the latest figures reported by the PMOI / MEK Iran, more than 43,600 people have died after becoming ill will COVID-19 which has spread to 319 cities across the country. Not a single province has been spared. The regime’s figures are much lower, with it reporting that only 7,249 people have died.

More than 43,600 people have died of the novel #coronavirus in 319 cities checkered across all of #Iran's 31 provinces, according to the Iranian opposition PMOI/MEK. pic.twitter.com/qg0ikD2gEW

The Iranian president and the country’s Supreme Leader have tried to portray the situation as being under control. Normally the different ministries in Iran would back up what the leaders say, no matter how unrealistic it is. However, many members of the Ministry of Health have spoken out about the reality of the situation.

Earlier this week, the Deputy Minister of Health stated that approximately 10,000 medical staff have contracted the virus. This figure in itself proves that the regime’s statistics are entirely false and cannot be trusted.

Meanwhile, President Hassan Rouhani has been trying to convince the public that the outbreak is reaching a stage where it is almost under control.

And shockingly, the Iranian president has been blaming the people of Iran for the spread of the virus. He said that the recent rise in cases is due to the people “not abiding by instructions”. This is an unacceptable claim because people have been left extremely vulnerable. The regime’s negligence and mismanagement of the crisis are criminal and it should be held fully responsible.

The pandemic has had terrible consequences for the people. Not only are they battling against this virus that can be deadly to many, but they are also suffering from more financial problems. Many businesses have been severely impacted by the outbreak and unemployment is rising. The already poor people in the country are now struggling even more.

Governors across Iran are speaking out about the situation in their provinces, painting a very different picture to the president. The deputy governor of Lorestan recently pointed to the critical situation there, saying that the province is “currently in an alarming state”.

The situation did not need to get to this stage. Despite spikes in cases, the regime’s ignored the scientific and medical experts and took action that would turn out to be a death sentence for many more #Iranianshttps://t.co/6PdpqEj0zi#Iran #MEK #COVIDー19 @USAdarFarsi pic.twitter.com/1EQZI7Efqr

The president of the health and sanitation network in Borujerd said that the number of cases of COVID-19 is increasing every day, as is the number of hospitalizations.

The reality of the situation is that the regime does not care about the impact of this health crisis on the people. It is only concerned about its interests and it is not going to do anything to help the people during this extremely difficult time. The reopening of religious sites – for the regime’s profit and propaganda machine – testifies to this.

Mrs. Maryam Rajavi, the President-elect of the National Council of Resistance of Iran (NCRI), said: Increasing the price of gasoline and bread for the impoverished people during the Coronavirus crisis is the flipside of the $30 billion that the ruling theocracy has spent from the Iranian people’s pockets in Syria to keep the criminal dictator in power.