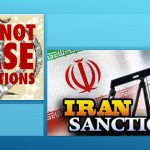 Written by Mohsen Aboutalebi on May 3, 2020. Posted in NEWS

Misusing the coronavirus crisis, the Iranian regime tries to either ease or lift the international economic sanctions.

Iran’s coronavirus crisis activated the latter’s diplomacy in an unprecedented manner. The mullahs orchestrated a considerable diplomatic campaign aimed at lifting, if possible, or weakening, as a minimum, of International sanctions mostly defended by the US administration against their regime.

The mullahs’ president Hassan Rouhani called at least a dozen counterparts in different countries, to explain how those sanctions were hampering his government’s efforts to fight coronavirus.

Despite their show of force and control staged inside the country to reassure an angry population because of the government’s incompetence and corruption preventing decisive action from curbing the virus’ spread, outside the country, the mullahs pretended that nothing could be done unless sanctions were eased or lifted.

Some members of the US House of Representatives were among the first personalities who, in an open letter signed by several former and current dignitaries, re-echoed Mohammad-Javad Zarif’s initiative to ease sanctions. Zarif had the pro-regime lobby in the US moving to undermine the sanctions. Ilhan Omar, Rashid Talib, and Alexandria Ocasio were among the representatives who urged the US administration in late March to ease the sanctions “during the coronavirus crisis.”

A demand for a $5B loan from the IMF was a central element of the regime’s initiative. Zarif tried to mobilize the UN along the line. He wrote to the UN Secretary-general, asking for his support to lift the sanctions. Even the UN High Representative for Human Rights issued a statement asking for sanctions to be eased.

The Iranian regime is seeking its sanctions to be suspended.https://t.co/inGmXntH7L#Iran #MEK #COVID19 #coronavirus @USAdarFarsi pic.twitter.com/Ky2LyZ5qxC

The regime’s initiative was to make an international gain exploiting the coronavirus crisis in Iran, while it had no real plans to spend the presumed sums to fight the pandemic.

Necessities to fight the pandemic were never subject to sanctions in the first place.

Zarif and Rouhani’s efforts aim was getting the regime off the hook of International control while continuing to spend on their ballistic missiles’ project and their regional interferences, as well as reinforcing the IRGC’s capacity for domestic repression. They knew very well that sooner or later, the regime would have to face intense internal unrest because of the government’s inability to protect the population from the pandemic. Iran’s actual number of fatalities, as announced by the MEK Iran, is about six times the official figure and puts the country only second to the US as it comes to the number of victims. Worse than the mortality figure, the fact that the government has decided to send the people back to work out of its failure to provide compensation for their staying home has created severe concerns on the part of authorities on a possible up-flare of popular dissent.

The Iranian resistance, the MEK Iran and the NCRI revealed the real aim of the mullahs’ campaign by explaining that what was missing with the regime was not money, but the intention to spend the money on the good fight against the pandemic.

NCRI representatives held an online conference on April 24 to reveal that several hundreds of billion dollars were available in the assets of only four vast holdings. They were all supervised by the mullahs’ supreme leader Ali Khamenei, who intends to spend them on strategic arms and regional expansion rather than the well-being of the Iranian people.

At the same time, the NCRI revealed the continuation of financing the Lebanese Hezbollah by the regime during the corona crisis.

The Iranian regime claims that int'l sanctions have hampered its ability to import medicine to fight the #coronavirus crisis in #Iran.
A glance at its state-run news agencies, however, shows that the regime has imported tons of medicine & medical equipment within just two months. pic.twitter.com/MT3Xr4CS9F

Further revelations by the MEK Iran on political prisoners’ situation in Iran’s prisons also showed how far the regime in power in Iran was from addressing the actual problems of the population. Despite claims by the government of releasing thousands of prisoners to avoid coronavirus infection in the prisons, it excluded most of the political prisoners from the provisional release plan.

The Un High commissionaire for Human Rights asked the regime to release all prisoners, again stressing that it could not ask for international help while not respecting the most primitive standards as it comes to the rights of its citizens.

In the meantime, a bipartisan letter signed by no less than 382 US House of Representative members to the US President Donald Trump asking for not to slacken the arms embargo on the regime quenched the regime’s hope for reliable support for its initiative in the US.

Fifty-one former and current dignitaries had, in another letter addressed to Mr. Trump last week, asked for the sanctions on the regime not to be lifted as the latter had enough reserves to curb the pandemic. Again fears existed of any money given to the regime being spent on nuclear and strategic arms development.

Finally, the supreme leader agreed to release $ 1B to help the government fight coronavirus.