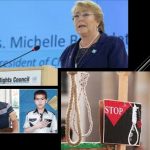 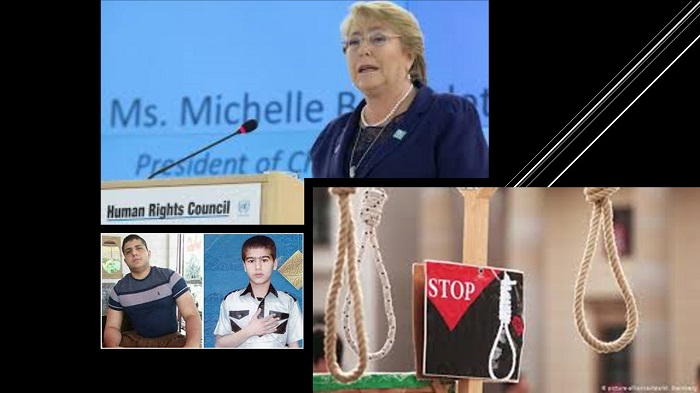 The UN High Commissioner condemned the execution in Iran.

The human rights situation in Iran has been appalling for years. Despite calls from international organizations for the regime to end its policies of suppression in the country, it can only be acknowledged that the situation continues to get worse.

It has become known that in the past few days the regime has executed an individual that was a minor at the time of his crime.

The UN High Commissioner for Human Rights Michelle Bachelet condemned the execution of Shayan Saeedpour – a child offender. He is the second child offender to have been executed by the regime in the past few days. Reports indicate that Saeedpour was executed in the province of Kurdistan on Tuesday 21st April.

The death penalty in #Iran is something that #HumanRights activists and organizations have been drawing attention to for years. Executions continue to take place regularly in Iran– the culmination of often unjust trials and unfair arrestshttps://t.co/52rhU5h7H0#MEK @USAdarFarsi pic.twitter.com/O0nFVhdtDE

The young man was arrested and subsequently sentenced to death for a crime that he allegedly committed while under the age of 18. The judicial process following his arrest and leading up to his death sentence was, according to the High Commissioner, “deeply flawed”.

At the beginning of April, Danial Zeinolabedini, another individual that was a minor at the time of his alleged crime was executed. He had been transferred to Miandoab prison in the province of West Azerbaijan and was severely beaten before being executed.

And last Saturday 18th April, reports indicate that Majid Esmailzadeh, another child offender, was executed in Ardabil prison in the province of the same name.

The High Commissioner said that the execution of these child offenders goes against international human rights laws. She said that experts and several United Nations bodies “have made it clear time and time again that the imposition of the death penalty for crimes committed by people below the age of 18 at the time of the offense is strictly prohibited”.

The High Commissioner also highlighted that her office had engaged with the Iranian government on this subject on several occasions, but that nothing has changed. “This is both regrettable and, given the clear illegality of these actions, reprehensible. I repeat my call on Iranian authorities to honor its international human rights obligations, immediately halt all executions of juvenile offenders and commute all such death sentences.”

Bachelet also spoke about the Coronavirus outbreak, saying that she is worried that it may expedite the execution of other prisoners on death row, especially those that have participated in protests about the conditions that they are being held in.

The treatment of prisoners in Iran is something that is also under scrutiny. It has been no secret that the conditions in Iranian prisons fall much below international standards, and it is even more urgent now that Coronavirus has entered prisons.

Mujahedin-e Khalq (PMOI/MEK Iran), over the past few weeks, have been calling for some basic hygiene supplies to protect prisoners against the virus. They have also been urging the regime to temporarily release them during the health crisis. Not surprisingly, the regime has either ignored or dismissed their concerns, resulting in several riots.

The situation requires urgent intervention and the regime must be held accountable for its negligence.