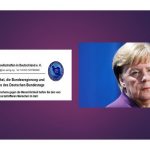 Written by Amineh Qaraee on April 9, 2020. Posted in NEWS 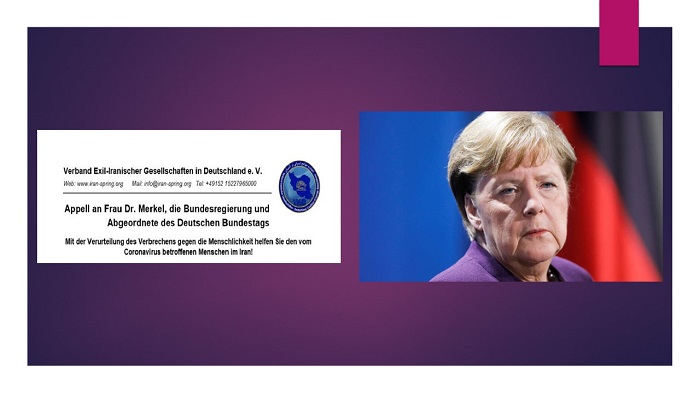 Association of Exiled Iranian Societies in Germany writes a letter to German Chancellor Dr. Angela Merkel asking her to condemn the Iranian regime’s behavior on coronavirus in Iran.

Supporters of the People’s Mojahedin Organization of Iran (PMOI / MEK Iran) and the and members of the country’s Bundestag to condemn the Iran regime’s behavior with regards to the Coronavirus outbreak in the country.

So far more than 23,100 people across Iran have died after contracting COVID-19 and the Iranian regime has mismanaged the outbreak since the very start. It knew about the first cases for weeks before informing the public and it wasted precious time that could have made a massive difference to the severity of the crisis.

It has acted in its own interests, preferring people to gather en masse to attend the Islamic Revolution anniversary celebrations and to participate in the sham Parliamentary elections.

More than 23,100 people have died of coronavirus in 251 cities checkered across all of Iran's 31 provinces, according to the Iranian opposition PMOI/MEK.#Iran#COVIDー19 pic.twitter.com/9cJoKuOShO

Other countries around the world are working hard to limit the death tolls in their countries. Of course, with hindsight, certain governments would have acted differently, but their intentions have always been with the people in mind. The Iranian regime, on the other hand, has shown that it could not care less about the people of Iran.

In their letter to Chancellor Merkel, the Association of Exiled Iranian Societies in Germany said that the situation in Iran is very serious and that the people and the medical workers are struggling. However, they emphasized that Germany must not send any financial aid to Iran because it is certain that every single penny will go into the regime’s pockets and that the people will never see or benefit from any of it. They wrote: “The money will continue to be used for domestic repression and for terrorism and expansion abroad.”

They advised that instead of sending financial aid, it would be more beneficial to the people if aid was sent in the form of supervision by the World Health Organization (WHO) and the United Nations. The members of the Association of Exiled Iranian Societies in Germany called on Chancellor Merkel to put pressure on the Iranian regime to accept international aid in this way, emphasizing that it is necessary “to prevent a humanitarian disaster”.

International aid has already been offered to Iran, but every time the regime refuses. One offer in particular from the Médecins Sans Frontières organization was rejected. Doctors from the organization were prepared to come to Iran to help relieve some of the pressure that doctors, nurses and medical staff in Iran are under.