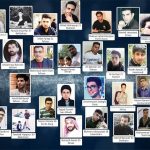 MEK Iran earlier announced that at least 1500 have been killed during Iran protests; however Iranian regime avoids releasing any figures

The Iranian regime was shocked by Iran November nationwide protests. The regime opened fire to protesters in order to avoid any immediate downfall. According to Iran’s main opposition movement, the People’s Mojahedin Organization of Iran (PMOI, Mujahedin-e Khalq or MEK Iran), at least 1500 people are killed by the regime’s security forces.
MEK Iran also announced that the number of those wounded is 4000 and some 12000 protesters are arrested.
But, still, the regime has not announced the number of martyrs.
After prudent and hard work by the MEK’s network inside Iran, many martyrs are identified.
Even though the regime brought down the internet in Iran for almost a week, the MEK Iran activists took great risks in overcoming such obstacles and obtaining information from inside the regime.

Widespread protests across #Iran and shut down of internet by the regime to create an information blackout to stop the flow of information and brutal crackdown#Internet4Iran #MEK #IranProtests @USAdarFarsi pic.twitter.com/nLHhU7TbJz

The figures of MEK Iran were announced by the MEK Iran network inside Iran. Establishing the exact scope of the regime’s brutality and the exact number of victims has been a daunting task. The MEK Iran has long relied on its vast network of activists to meticulously and painstakingly compile data from all over the country. But its latest task was made more challenging by the regime’s concerted efforts to conceal the real scope of the uprising and the atrocities it committed.
The MEK Iran Resistance Units provided information included continually updated details about the victims, often accompanied by their pictures. As of January 2, more than 643 victims had been identified.
The National Council of Resistance of Iran (NCRI/MEK Iran) reported on November 19 that “more than 200 protesters have been killed during the Iranian people’s nationwide uprising. Thousands have been wounded.”
Seven days later on November 26, the MEK Iran announced that the number of casualties had surpassed 450, while the unrest had engulfed 176 cities.
On December 4, the NCRI announced that according to the MEK Iran, “The number of those killed in the protests that swept across 189 cities has risen to above 1,000.”
Following that Brian Hook, the U.S. Special Representative for Iran said in a briefing, that the regime’s security forces may have killed more than 1000 people during the November uprising.

The MEK Iran confirmed on December 15 that over 1,500 protesters have been killed during the Iranian people’s nationwide uprising in different provinces across the country. At least 400 have been killed in Tehran, 320 in Kermanshah, 270 in Fars, 240 in Khuzestan, 120 in Isfahan, and 100 in Alborz (Karaj).”
On December 23, Reuters cited sources within the regime that confirmed 1,500 people had been killed during the protests.
The Reuters report was met with the regime’s outrage and the regime’s media was riddled with stories denying the figure for several days.
They indicated that the source of the figures contained in the report was the MEK Iran.
“Reuters published a special report about the death toll during the November incidents and claimed 1,500 people have lost their lives. The interesting fact is that the Reuters’ source is the Mujahedin-e Khalq [MEK Iran] grouplet,” wrote Jamaran state-run news-agency on December 24.
By reflecting regime’s fear and anxiety about MEK Iran role in exposing the dimension of the bloody crackdown of November protests, the state-run Alef news agency, which is close to the regime’s supreme leader, Ali Khamenei, wrote on December 24:
“Following the recent uprisings, the MEK Iran, with years of experience in lying, immediately announced the death toll. The number of those killed was initially small and gradually increased… The MEK Iran, through the National Council of Resistance, in early December in Statement No-43 claimed there were over 750 casualties. A day later, they claimed the death toll had reached 1,000. A week later, Brian Hook, the US State Department’s special envoy for Iran, confirmed the MEK’s claim that more than 1,000 people had been killed by regime forces in Iran! In his remarks, he repeated the same ridiculous narrative of the MEK about the security forces demanding money from the [martyrs’] families for the bullets they shot at their loved-ones.”
Alef news agency added that “December 15, the National Council of Resistance issued Declaration No. 55, and announced that the death toll has reached 1,500. Surprisingly, this statistic has now been reintroduced in the Reuters controversial report.”
The regime has rejected the number of 1,500 martyrs but yet refuses to gives its own estimates, more than six weeks after the uprising.
From day one the regime tries to either downplay its mass murder or to shift the blame to other parties.
Ali Shamkhani, the secretary for the regime’s Supreme National Security Council claimed in his remarks on state radio and television, published by the official news agency IRNA that “More than 85 percent of those who lost their lives in the recent incidents in cities in Tehran Province did not participate in any of the protest gatherings and were killed under suspicious circumstances with firearms and other weapons not issued by the [security] forces. Thus, the opposition [groups’] project of piling on casualties in this region is certain.”
Shamkhani’s remarks only underscore the regime’s commitment to distraction rather than clarity and show that the regime is unable to announce a much lower number than that which has been provided by the MEK Iran.
The Iranian regime is also unable to acknowledge anything approaching the reality of the situation, lest the dimensions of its crimes are revealed, and the regime made to face the consequences.
This shows, of course, a large strategic impasse the regime is facing and cannot entirely halt the flow of accurate information. The regime’s measure only serves to encourage more of the domestic revolt and foreign scrutiny that are bringing it to the brink of overthrow.